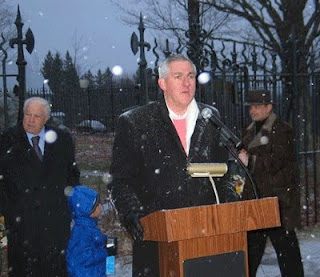 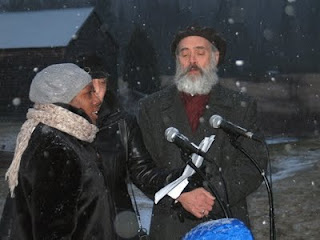 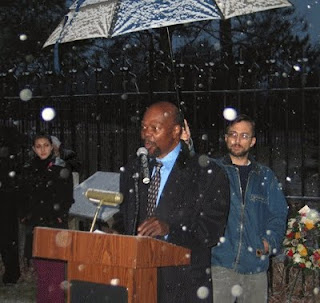 Pictured (top to bottom): John Brown program organizer, Bob Bullock speaks (note LouMike, the youngest John Brown celebrant standing nearby); the musical duo Magpie (Greg Artzner & Terry Leonino) with gospel vocalist Michele Sweeting; and Roy Innis of CORE
Graveside Ceremony at John Brown Farm, Lake Placid, N.Y.
LAKE PLACID - It was snowing. Most of the several dozen spectators were wearing coats, hats, scarves or gloves. A few even held umbrellas, as they paid their respects to "a man who was willing to die so that others could live unshackled," in the words of Robert Bullock.
Bullock, president of the New York State Archives Partnership Trust, has been heavily involved in the commemoration of the 150th anniversary of radical abolitionist John Brown's raid on the federal arsenal at Harper's Ferry, (now W.) Va. and subsequent trial and hanging. Bullock was one of the speakers Saturday afternoon at a ceremony at the John Brown Farm, where wreaths and carnations were lain on the grave containing Brown and a number of other men who died in the raid or were hanged for their participation.
"At many times throughout our nation's history, this sacred soil was Mecca," Bullock said.
Natalie Ross, a young woman who spoke representing future generations, said she learned about Brown's violent acts in school, but also that "the violence was a catalyst that led to freedom for many people was not mentioned."
Roy Innis, national president of the Congress on Racial Equality, said Brown "broke the logjam" on slavery, forcing the issue to the national forefront by his actions in Kansas and his raid on the federal arsenal.
"The way to free a slave is to free a slave, not to talk about it," Innis said.
As people filed out of the gated grave site after laying wreaths and carnations, the crowd sang the first verses of "John Brown's Body" and "The Battle Hymn of the Republic."
The ceremony ended with the folk band Magpie singing "Amazing Grace."
Bullock said Brown's "indominable spirit" is alive in people in the Adirondacks today. If Brown were alive, Bullock said, he would be glad that these values still exist and that "increasingly, we live in a world where freedom is a right, not a privilege."
Source: Nathan Brown, "Graveside Ceremony Celebrates John Brown," Adirondack Daily Enterprise on line, Dec. 7, 2009
Posted by Louis A. DeCaro, Jr. . . at 12:14 AM