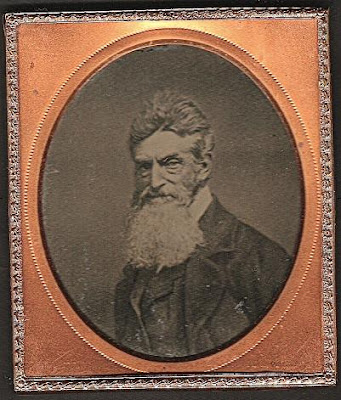 The way I see it, if the larger truth were told Brown was convicted
and condemned not for treason and murder but for interference. If he
had actually done something for which he should have been convicted
and executed, a pardon would seem appropriate. But since what he did
was, in my humble opinion, the only thing he COULD do and something
that desperately needed doing–as he said, "not wrong, but right,"–a
pardon is the wrong thing to do.

I would be surprised given his political savvy and the current
political climate if Obama would do it or even consider it. He needs
those southern Democrats too much, the ones who use John Brown as a
cuss word.

But for the larger moral and philosophical reasons I hope he doesn't.

Louis,
This was a very profound post. My automatic kneejerk reaction was "YES! PARDON HIM! ARE YOU KIDDING?" But, I see exactly where you are coming from and I fully agree with everything you said.I love this blog so much and I hope it continues.

Rock on. So to speak, we have bigger priorities than to pardon John Brown. To merely pardon John Brown is a meaningless symbolic gesture without the greater work of racial reconciliation, equalization, and reparation in our country.

I think you make a strong case. Brown's wishes in the matter shouldn't be irrelevant. It happens in art history too. The question "What did the artist intend" is replaced by "what does it mean" - to the exclusion of real understanding in some pieces.

RE: This is our first black president. Be nice to him.

The blood of children in the Middle East is still red regardless of what the president looks like.

I agree with you. My remark was somewhat tongue-in-cheek; my point was simply that asking Pres. Obama to involve himself in this matter would only create more opportunities for right-wingers to rant and rave against for no good reason. I am not suggesting that because he's our first black president he should not be criticized for legitimate reasons, and I personally believe that his policy regarding the Middle East vis-a-vis the Palestinians reflects no positive "change," indeed no change at all. Your concern is valid, but jumping on my comment was a bit opportunistic on your part.--LD