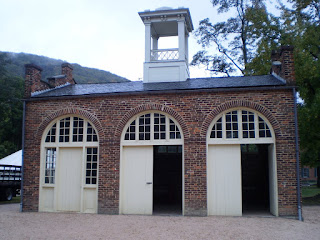 For the longest time I did not think that I would be able to attend the symposium at Harpers Ferry this month in commemoration of Brown's raid, and since I am scheduled to speak at other John Brown events this fall and winter, I pretty much put aside any idea of going down for the sesquicentennial events in West Virginia. However, about October 1 (the deadline for registration for the symposium) the skies cleared and it became evident that I could get away after all. Unfortunately it was now too late to register, and the Harpers Ferry people didn't even respond to my phone inquiries. I nearly gave up attending, but my wife Michele encouraged me to go anyway. "It's a historic moment for John Brown's legacy, your friends are going to be there, and you should go," she told me.

Things came together: I was able to travel by Amtrak to the Ferry with Larry Lawrence, founder and chairman of The John Brown Society (based in New York City); and Norman Marshall, portrayer of John Brown in the wonderful play, "John Brown: Trumpet of Freedom," offered to share his motel room in Martinsburg, about a half-hour's drive from Harpers Ferry.

Arriving on Thursday afternoon, we had just enough time to drive over to Charlestown, where we were delighted to hear the author Brian McGinty's presentation about the trial of John Brown--delivered in the very same courthouse where the abolitionist and his followers were found guilty and condemned to death. I am reading McGinty's new book, John Brown's Trial and will refrain from making too many comments because I am preparing a review for a scholarly journal. Certainly McGinty's approach throughout was balanced, showing both an appreciation for inequities bound up with the trial (Brown was tried and convicted largely by slaveholders) but also agreeing with the State of Virginia's charge of treason against Brown. (I may be wrong, but I suspect that legal expert and historian Paul Finkelman would not agree.) By the way, Larry made a penetrating comment/question to McGinty which the author evaded. Perhaps he did not want to address the "racist imperialist" theme invoked by our stalwart friend of Brown.

Afterward, under the assumed identity of a registered symposium participant, I "John Browned" my way into Greg Artzner & Terry Leonino's (Magpie) presentation about John and Mary Brown, which I enjoyed from the back row. I particularly liked Greg's performance of John Brown's silent way of laughing, a fact that we know from the testimony of Nellie Russell, the wife of Judge Thomas Russell, who hosted Brown in their Boston home and who also later went down to Charlestown to visit him on "death row." I bought my copy of the Magpie CD back in 2000 in Lake Placid, at an event sponsored by our friend Martha Swan of John Brown Lives!, so it was nice to finally meet these talented and deeply devoted friends of the Old Man.

The next morning I tried to come clean and register for the symposium but was turned away by the Park Service staff. Registration was closed and the catering was precise, or so I was told. Perhaps they would have let me slide had they known I am a John Brown biographer, but trying to get special treatment seemed unworthy of the Old Man's legacy, so I jumped on the next bus down to the Ferry and spent the morning and early afternoon covering the tourist spots and sites of old downtown Harper's Ferry. For the most part, I'd have to say that the mini-museums and restored sites of the town are quite well done and in a couple of hours it is possible to get a fairly good education about the town itself, the John Brown raid being only one portion of its history.

The two John Brown museums in town are very different from each other. The National Park Service's John Brown museum is well done for the most part, and features some important relics and fairly well presents the story of the raid. (Currently, you can enjoy Jean Libby's photo exhibit of John Brown upstairs, who has done the definitive study of dagguereotypes and images of the Old Man, and for which there is a companion volume now on sale on Amazon.com.) The other John Brown museum, which costs $7 for admission, is almost like a "haunted house," where you walk through corridors and look through display windows at very old and often poorly prepared mannequin exhibits portraying various scenes of Brown's life and efforts against slavery (the whole thing seems like it's a left over from the 1960s; the owners are wringing as many bucks as they can out of it before it falls apart).

On Friday afternoon, I had occasion to wait in the welcome center of the Harpers Ferry during which I sat reading, occasionally interested by the mini-lectures provided to tourists by one of the National Park Service representatives. A number of these tourists were foreigners who knew little about antebellum history let alone John Brown. I mention this because some of the Park Service official's remarks that I heard were very telling: "A lot of people around here don't like John Brown very much. . . . We're not celebrating John Brown's raid, we're commemorating it. . . . John Brown the rabid abolitionist." It struck me that these Park Service people are playing the role of educating many people every year regarding the Harper's Ferry episode. How many tourists have been fed this image of Brown as "rabid," a fairly obvious anti-Brown description? I wonder if this same official would speak of slave masters as having been "rabid" too?

I should add that on Friday evening, since I could not march to the Ferry with the symposium folks (it was raining and cold and I probably would have ducked out anyway), I hung around town with Ian Barford, who was taping our whole outing, including plenty of time around the fire engine house (i.e., John Brown's "fort") with a camera equipped with night vision.

On Saturday I got a few minutes to see Jean Libby, finally, as well as John Hendrix, my former parishioner from Jersey City who now resides back home in St. Louis. He is a very successful illustrator and a newly published book for young people entitled, John Brown: His Fight for Freedom. I also saw my dear friends Alice and Fred Mecoy (Alice is a direct descendant--that is, great-great-great-granddaughter of the Old Man), but had unfortunately little time with them this time around and regretably missed her presentation. Just before we left, I was able to slip into one symposium presentation pertaining to black raider Dangerfield Newby and and his widow Harriet Newby. It was revealed that Dangerfield had saved about 750 dollars (about $17,000 today) to buy Harriet and some of his children out of slavery, but this significant sum was not enough. Newby fell in Harper's Ferry and his body was desecrated, as were the bodies of others of Brown's company, to the shame of the "gallant" white Virginians who were not satisfied to kill these liberating invaders.

So that was my time in the Ferry. I enjoyed being there for the importance of the historical moment. I missed a good deal of the symposium itself, but the best of these presentations have a tendency to end up being published in a collection anyway. The most important aspect of the Harpers Ferry event for me was being there--seeing friends and associates in the study, walking the streets and talking with other visitors, and celebrating Brown's effort, even if the National Park Service is only remembering it.
Posted by Louis A. DeCaro, Jr. . . at 6:00 PM

Fred and I were also sorry that we did not have more time together, but I appreciate you making the time to attend the 150 commemoration of John Brown's Raid on Harpers Ferry.
Having the chance to connect with so many historians, biographers, friends and supporters of John Brown during this emotional week meant more to me that I can express.
Alice Keesey Mecoy
great great great granddaughter of John Brown

I was there on Friday, had a lot of fun. It was my first time in Ferry since I'm working on an animation project on Brown. I heard all kinds of opinions concerning John Brown, but the overall sense was the celebration. I mean, you could see re-enactors dressed up as John Brown and his raiders. The whole procession from Kennedy Farm to Ferry was sort of a celebration. Sure, there were Marines, but I didn't see anyone brandishing guns dressed up as a slaveholding Virginian militia.