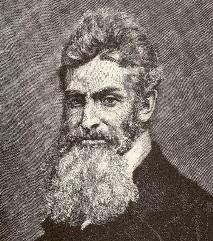 The schedule is as follows:

At 5:30 pm, there will be a reception in the Litchfield Room, Litchfield County Extension Center, University of Connecticut, Torrington.

Sunday, October 18th: Lecture and Book Signing by Brian McGinty (co-sponsored by University of Connecticut, Torrington.)
Sunday, October 18th @ 5:15 pm at University of Connecticut, Torrington Branch, 855 University Drive.
The final day of the John Brown events includes a lecture and book signing by Brian McGinty, author of John Brown's Trial (Harvard University Press, Oct. 2009).
The book will be available at the University of Connecticut, Torrington bookstore, and the author will sign books after the lecture. McGinty provides the first comprehensive account of John Brown's trial, which raised important questions about jurisdiction, judicial fairness and the nature of treason. McGinty sees the trial, rather than the raid, as the real turning point in the struggle between north and south.
"Recommended for all readers interested in the Civil War..." -- Stephen L. Hupp, West Virginia University Library, Parkersburg.
"The author's legal knowledge illuminates the proceedings' intricacies and shortcomings, and reveals how Brown's brief closing statement, considered among the most eloquent words in the nation's history, had a more lasting impact than his armed raid. Brown's statement, writes McGinty, 'transformed his public image from that of a violent fanatic to one of a public hero'. McGinty makes a strong and plausible case." -- Publishers Weekly


AKRON, OHIO
The Summit County Historical Society will open the freedom fighter's former home, the John Brown House, from 3 to 6 p.m. on three upcoming Tuesdays: Sept. 22, Oct. 27 and Nov. 24. The house is at Diagonal and Copley roads in Akron. To learn more or book group tours at other times, call 330-535-1120.

Brown will be this year's star of the annual Ohio Underground Railroad Summit, a gathering for $75 per person on Friday, Oct. 16, and Saturday, Oct. 17, at the Hudson Library and Historical Society. The library owns a leading trove of Brown materials, which visitors can see for free whenever the building is open. The library is at 96 Library St., 330-653-6658,
hudsonlibrary.org.

On Friday, Oct. 16, officials will commemorate the anniversary of the raid at 11 a.m. at the John Brown Monument, which stands in a normally closed part of the Akron Zoo. The monument was built in 1910 by the German-American Alliance and improved in 1938 by the Negro 25 Year Club.

During the event, Brown will be portrayed by Neil Thackaberry, who runs Actors' Summit on Hudson's Owen Brown Street, named for John Brown's father. Visitors to the commemoration may park at the zoo for free. After the commemoration, the John Brown House will be open until 2 p.m.

From Oct. 16 through Feb. 14, the Akron Art Museum will display "The Legend of John Brown," featuring celebrated prints by Jacob Lawrence in the museum's collection, at normal hours and admission prices, 330-376-9185, akronartmuseum.org.

On Saturday, Oct. 17, Leon Bibb of WEWS Channel 5 will narrate and the Akron Symphony Orchestra will perform a John Brown concert, including the debut of "The Passion of John Brown" by Jesse Ayers, a Malone College professor. The concert will begin at 8 p.m. at E.J. Thomas Hall. For details, call 330-535-8131 or see akronsymphony.org.

On Wednesday, Dec. 2, Akron leaders will commemorate the anniversary of Brown's hanging at 11 a.m. at First Presbyterian Church, 647 E. Market St. At the end, the church bells will toll, as many local bells did 150 years ago that day.

Through the rest of 2009, an exhibit of artifacts called "Summit County's John Brown" will be on view in the Special Collections department on the third floor of the downtown Akron-Summit County Public Library, 60 S. High St., 330-643-9000, akronlibrary.org.

The monument is part of a local "Freedom's Friends" tour by the Oberlin Heritage Center at 11 a.m. the second Friday and fourth Saturday of each month through October and by appointment. For details, call 440-774-1700 or see oberlinheritage.org.

"The Sword of the Lord and of Gideon: John Brown & The Coming of the Civil War," a symposium on the militant abolitionist from Connecticut who led the raid of the federal arsenal at Harpers Ferry, Va., on Oct. 16, 1859, will be held on Oct. 17 at Springfield Technical Community College.

David S. Reynolds, author of John Brown Abolitionist: The Man Who Killed Slavery, Sparked the Civil War, and Seeded Civil Rights, will be the keynote speaker.

Dinah Mayo-Bobee, visiting professor of history at University of Massachusetts in Amherst, will also present on Brown and the "Pottawatomie Affair."

Richard Colton, historian at the Springfield Armory National Historic Site, will discuss the destruction of Harpers Ferry and its effect on the armory.

John F. Gately, chair of the English department at the community college, will present and discuss some Brown related items from his abolitionist collection.

Brown, who is the subject of a panel in the new Museum of Springfield History set to open on Oct. 10, and his family moved to the Springfield to establish a method of distribution that would offer a wider and fairer market for raw wool. Although the company failed, the four years Brown spent in Springfield were crucial to his deepening involvement in the abolitionist movement.

A book signing of Reynolds' best-selling biography will be held after the symposium.
Registration would be appreciated and can be done by notifying John Gately at Gately@stcc.edu

The Gerrit Smith Estate National Historic Landmark is located at 4543 Peterboro Road in Peterboro NY. There is a $2 admission and free to students, stewards, and residents of the Town of Smithfield.