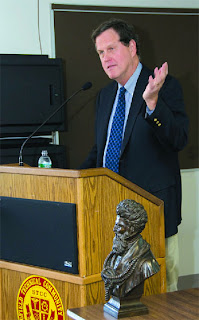 John Brown Symposium in Springfield, Mass. features Biographer David Reynolds
On Oct. 17, 2009 the 150th anniversary of the raid on Harper’s Ferry that ignited the Civil War, the Springfield Technical Community College School of Arts, Humanities and Social Sciences held a symposium on abolitionist John Brown, who lived for four years in Springfield. Pictured above is David S. Reynolds, author of the best-selling biography John Brown, Abolitionist: The Man Who Killed Slavery, Sparked the Civil War, and Seeded Civil Rights, with the bust of John Brown. Pictured below is Professor John Gately, also an antiquarian book dealer, speaks about his collection of memorabilia of John Brown and the era just before the Civil War.
Source: BusinessWest Online [Springfield, Mass], Oct. 26, 2009 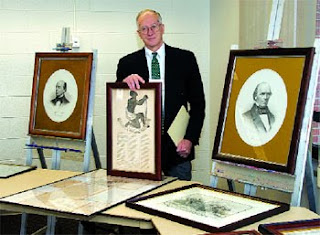 Brown’s raid events draw large crowds; Officials say nearly 5,000 people came out for 150th anniversary of abolitionist's seige
Harpers Ferry National Historical Park and the local community on Oct. 15 recognized the 150th anniversary of Brown's attempt to seize weapons from a local arsenal in an attempt to arm area slaves.
Numerous events took place leading up to the anniversary, and activities continued throughout that weekend.
In all, officials said nearly 5,500 people took part in events at the park that weekend, despite the rainy weather. More than 2,000 travelers stopped by the newly opened Harpers Ferry Visitor Center that weekend, said Paulette Sprinkle, director of the Jefferson County Convention and Visitors Bureau.
"That's just what we got in this building," Sprinkle said of the figure.
Sprinkle said the weather may have deterred some of the visitors who were initially expected to turn out for the events.
"The weather was so bad," she said.
Initially, officials with Harpers Ferry National Historical Park expected crowds for the anniversary to be so large that the park's 1,000-car parking lot would not be able to accommodate everyone. Plans were in place to use nearby Bolivar Heights for auxiliary parking if it was needed, she said.
The crowds ended up being smaller than those projections, but considering the weather, Sprinkle said they were still a healthy size.
"That was a very good turnout," she said.
Sprinkle noted that the events surrounding the John Brown sesquicentennial are not over just yet.
In November, events will continue at Harpers Ferry National Historical Park. A community forum and walking tour through Charles Town also are planned for that month.
Members of the Jefferson County NAACP are reportedly planning events in December, including a ceremony in which participants will retrace the route from the Charles Town jail to the site where Brown and two of his raiders were hanged.
Sprinkle said the county is expected to again play host to visitors who are partaking in the community's historic tourism attractions in 2011. At that time, the sesquicentennial of the Civil War will get under way, continuing through 2015.
In a previous interview, Sprinkle noted that tourism is the No. 1 industry in the county. In 2006, reports show that historical attractions, outdoor activities and local gaming facilities combined to create nearly 6,670 jobs in the area.
Sprinkle said Tuesday that it is her agency's job to help attract visitors to participate in the many attractions that the local area has to offer.
"What we do is help promote the events as we know they're coming," she said.
In 2008, she said the group placed nearly 10 million ads. The figure was based on the number of ads placed, multiplied by the number of publications and their circulation.
"Of course most of those (ads) had a lot about John Brown," she said. "We usually emphasize the other things we have here too."
Marsha Wassel, spokesperson for Harpers Ferry National Historical Park, had not returned calls from The Journal at presstime.
- Staff writer Naomi Smoot can be reached at (304) 725-6581, or nsmoot@journal-news.net
Source: The Journal [Martinsburg, West Va.], Oct. 27, 2009
Posted by Louis A. DeCaro, Jr. . . at 10:18 AM