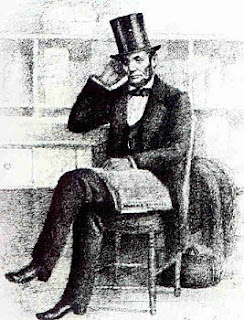 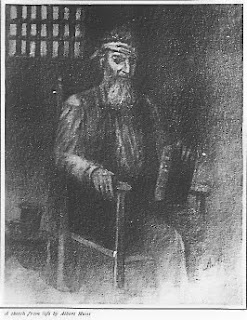 John Tarleton, "Rethinkin’ Lincoln"
The Indypendent [New York City], October 30, 2009
When Abraham Lincoln accepted the Republican Party nomination for the U.S. Senate in 1858, he warned that “a house divided against itself cannot stand.” The future president believed it was impossible for the rapidly growing country to continue half-slave and half-free. Like many moderates of his day, he sought a compromise solution that would contain slavery in the hopes that it would eventually expire.
John Brown shattered this illusion. In October 1859, Brown and a small interracial band of followers seized a government arsenal in Harper’s Ferry, Va., in a failed attempt to launch a slave revolt. Brown, with his long, flowing white beard, was sent to the gallows and became an instant martyr for millions. His daring raid managed to radicalize many Northern opponents of slavery while intensifying pro-secession sentiments in the South, just as the 1860 presidential campaign was set to begin.
Lincoln disavowed Brown as a madman while pursuing his successful bid for the White House. However, Brown’s parting words (“The sins of this guilty land can only be purged with blood”) would prove to be a prophetic curse. As the Civil War unfolded, Lincoln would find himself trodding much the same ground that Brown had as he reluctantly moved toward becoming the “Great Emancipator” that history remembers him as.
Now, 150 years after Harper’s Ferry, the distinct but overlapping paths of the two men — one a fiery apostle of direct action, the other a pragmatic reformer — are explored in a pair of exhibits at the New-York Historical Society. Combined, the two exhibits speak to the recurring question of whether social change is brought about by radical organizing from outside existing institutions or by reformers acting from within those same institutions. 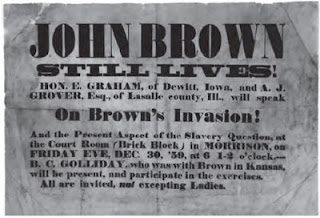 The John Brown exhibit is tucked away in a single upstairs room. The show follows Brown’s increasingly militant response to concessions made to pro-slavery forces during the 1850s. This in turn is a prologue to the audacious plot he hatched on a remote farm five miles outside of Harper’s Ferry. The details of the raid are precisely recounted. Unlike most abolitionists, Brown believed that slaves were ready and able to fight for their freedom and only needed the arms to do so.
Relying heavily on personal correspondence, the exhibit presents the voices of Brown’s family members, fellow conspirators, skeptical allies in the abolitionist movement and the widow of one of his victims. Deeply religious, Brown was a man on fire. Whether he was a heroic freedom fighter or a 19th-century domestic terrorist is left for visitors to discern.
Downstairs, a sprawling Lincoln exhibit uses a vibrant multimedia format. Audio, video, photos, cartoons, paintings, newspaper front pages, personal correspondence, historic artifacts, an interactive game for aspiring war profiteers and more are used to provide a fascinating look at the 16th president and the Civil War. The show grapples with issues familiar to our own age — an unpopular war, economic crisis, incarceration of prisoners by presidential decree and deeply entrenched white racism. By focusing on Lincoln and New York, the great drama of the Civil War era plays out on a human scale.

The John Brown exhibit is tucked away in a single upstairs room. . . . Downstairs, a sprawling Lincoln exhibit uses a vibrant multimedia format.

NEW YORK ON EDGE
Support for Lincoln was thin in New York City, as many business elites wanted to maintain trade ties with Southern cotton growers while working-class whites worried that the abolition of slavery would mean more competition for their jobs. When Lincoln took office, Mayor Fernando Wood went so far as to suggest that New York should secede and become its own independent city-state, which would be free to trade with both the North and South.
These roiling tensions come to life throughout the exhibit, from Lincoln’s 1860 Cooper Union address which launched his longshot presidential campaign, to torchlight parades by thousands of young, whiterobed Lincoln supporters known as the “Wide Awakes” to the screaming front-page headlines of the city’s unabashedly partisan newspapers.
While the exhibit focuses on Lincoln, it does not exalt the Great Man but shows him as the controversial figure he was at the time. For many of his supporters, like the African-American orator Frederick Douglass and New York Tribune publisher Horace Greeley, Lincoln was far too cautious in eliminating slavery once the war was under way. His detractors, meanwhile, are shown portraying him first as a simple-minded rustic (“The Railsplitter”) and later as a thick-lipped tyrant (“King Abraham Africanus I”) and promoter of interracial marriage, a common slur defenders of slavery used against abolitionists.
At about the midpoint in the exhibit, you can sit in the front pews of a re-created African-American church. It is Jan. 1, 1863, and jubilant voices celebrate the enactment of the Emancipation Proclamation while a stirring choral rendition of “John Brown’s Body” is performed. Six months and a couple of rooms further into the exhibit, euphoria turns to horror as simmering race and class tensions explode when poor Irish immigrants unleash their fury on New York’s African-American population.
Blown-up wall panels with street maps of the city provide a detailed log of the four-day orgy of violence. It was the deadliest riot in U.S. history. At least 120 people were killed and more than 2,000 injured prompting Lincoln to send in federal troops to quell the disturbance. Sitting in a small enclosed chamber, one can listen to the re-created voices of victims and eyewitnesses describing what they saw.
Lincoln’s institution of a military draft — a first in U.S. history — was the catalyst for the riots. The war’s carnage was mounting with no end in sight. The rich could buy their way out of military service for $300 (a massive sum for the average workingman), while private contractors made fortunes off supplying the troops with shoddy uniforms, rotten food, defective rifles and so on. Such were the conditions that allowed the anti- Lincoln press to stoke a racially charged backlash of one group of powerless people against another.
EMANCIPATION
The Union Army’s growing shortage of manpower forced Lincoln’s hand on slavery. Citing “military necessity” he issued the Emancipation Proclamation and authorized African-Americans to serve in the U.S. military (but only in segregated units). Almost 200,000 did so by the end of the war.
By freeing the slaves, Lincoln transformed the war into the kind of moral crusade previously espoused by John Brown. A proud Black soldier depicted on the front page of an African-American newspaper highlights a great irony: The same federal government that Brown rebelled against was now arming former slaves to fight for their freedom on a scale that he could have only dreamed of a few years earlier.
The mythology that grew up around Lincoln beginning in his own lifetime is gently deconstructed throughout the exhibit, from Greeley’s branding of “Honest Abe” during the 1860 election campaign to the post-Emancipation Proclamation depiction of Lincoln as the benevolent white father liberating the slaves to Lincoln’s final ascent to secular sainthood following his assassination. Lincoln is presented as an extraordinary figure, but viewers are also invited to ask questions and draw their own conclusions.
The Lincoln exhibit’s greatest shortcoming is its lack of context for understanding the economic vision that guided Lincoln and the Republicans. While the Democrats were the party of the Southern slaveholders, most Republicans were not hardcore abolitionists. They did want to see slavery’s spread halted, but for practical reasons. The expansion of the export-oriented plantation economy of the South was incompatible with the North’s continued development of a modern, entrepreneurial capitalism based on wage labor and satisfying the demand of a growing internal market.
The grand compromise that emerged following the end of Reconstruction in 1876 saw the South economically subordinated to Northern capital but allowed to maintain its “peculiar” racial caste system minus chattel slavery. Lincoln and the Republicans would have happily settled for this in 1860. Almost a century later, the civil rights movement successfully challenged many of the worst abuses of a segregated society. Cloaked in moral fervor but guided by nonviolent principles, it shook the country’s power structure and helped ignite the other great social movements of the 1960s. The tactics were different from those of John Brown — but Brown’s dream of interracial solidarity and political and social equality for all was a vision that America was once again moving toward. And much still remains to be done, regardless of who is in the White House. Even in 2009.
Lincoln and New York and John Brown: The Abolitionist and His Legacy will be on exhibit at the New-York Historical Society through March 25, 2010.
212-873-3400 • nyhistory.org