Some Thoughts on the Release of the "Emperor" Movie


Unfortunately, the month of August has been quite distracting, and even in making this entry, nearly a month since the last one, I must write in haste.

When I heard of the production of "Emperor" in 2018, I was prompted to do some research and write an article about Shields Green, one of Brown's Harper's Ferry raiders.  After a couple of days, however, I had about one hundred pages, particularly because I begun to notice things that I had never noticed before--issues like Green's status at birth, his alleged real name being Esau Brown, the time of his escape, and even his age.  When Clara Platter, my thoughtful editor at NYU Press, heard about my Shields Green work, she encouraged me to expand it into a book. And so The Untold Story of Shields Green was born, and will be officially released in October (although it is possible to purchase advanced copies now--click here).

As far as the "Emperor" movie is concerned (click here for trailer), I did not expect it to be historically consistent, although the writers took such liberties with the story that it surprised me. Particularly, the movie has a very different ending that what actually happened to Green.  Since there is so little information about Emperor, of course, the movie takes advantage of this fact by presenting a story line that is almost purely fictional and only connects with the truth with Green's meeting with John Brown and Frederick Douglass at Chambersburg prior to the Harper's Ferry raid. The misrepresentation of the Harper's Ferry raid is almost purely fictional and quite misleading, and the writers missed the opportunity to appreciate how Emperor represented a martyr for the antislavery cause, instead opting to have him escape in a blaze of glory like an action hero.   So be it. 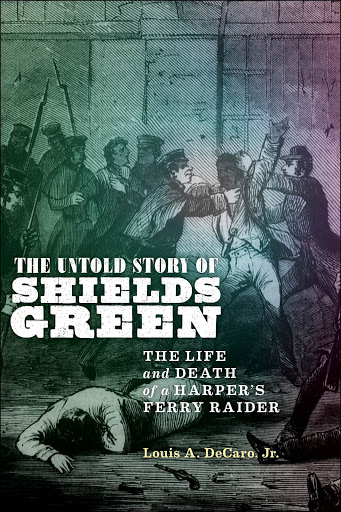 What was personally interesting for me about the movie is that the fictional account concludes with Green's grown son, in the late nineteenth century, submitting a manuscript to a publisher about his father's life.  In fact, Shields Green is the least known and perhaps most misrepresented of Brown's raiders.  We do not even have a daguerreotype photograph of him, and historians themselves have conveyed questionable notions about him because no scholar has seriously taken on his story until now.  In fact, to the contrary of the movie, it is not Emperor's son who writes about him for posterity.  Rather, over a hundred-and-sixty years after his death, it was I who wrote, or tried to write, his story. I am honored to have done so, although I have made it clear in the book that I do not believe my work is either ultimate or definitive. There may be yet more to learn about this mysterious figure in the story of John Brown.

If I have one real objection to "Emperor" it is that the screenplay writers place words in the mouth of Frederick Douglass (played by Harry Lennix) that I do not believe the Orator would have ever spoken, not in 1859, nor later in his life either.  In the scene at Chambersburg, where Emperor must choose whether he will follow John Brown or not, Douglass essentially accuses John Brown of exploiting white privilege in recruiting black men.  This is, in fact, a very contemporary interpretation, and seems to reflect the need to impute a kind of racism to Brown after the fact than is called for by the black witnesses of those who knew him.  It was Brown's assumption that black people were underrated for their courage and determination to fight for their freedom, and so he sought to recruit them for his cause.  Were he subjecting them to something that he was not willing to undertake for himself and his own sons, then perhaps the charge would have some weight.  But Brown put his own life on the line, as did his sons Oliver, Watson, and Owen, and three of the four died as a result. Douglass himself never made such a charge in anything he wrote or said on the record, and it was a kind of cheap shot for the screenplay writers to include the words.

At any rate, I would not discourage you from watching "Emperor." Despite its largely fictional storyline, both Shields Green and John Brown are at least presented as men of dignity and intent.  In contrast to the upcoming "Good Lord Bird" screen adaptation by Ethan Hawke on SHOWTIME, John Brown (portrayed by veteran actor, James Cromwell) in "Emperor" doesn't look crazy. Likewise, Dayo Okeniyi's Shields Green is a serious freedom fighter, and I believe this is precisely true of the real Emperor. Indeed, all the actors are excellent and it is good entertainment as such.  Still, it's not a history lesson as much as it is a legend--something lying just between Quentin Tarantino's "Django Unchained" and Nate Parker's "The Birth of a Nation."