Retro: Has Chowder Changed His Mind on Brown? Reflections on his "Father of American Terrorism"

Twenty years ago, in early 2000, PBS aired a documentary by Rob Kenner entitled, "John Brown's Holy War." It has been as many years since I viewed it, although even then, relatively on the front end of my work on Brown, I found "Holy War" highly problematic. I consider it the worst documentary ever made on John Brown and certainly I would never recommend it for use in the classroom.
About the same time that the documentary was aired in 2000, its writer, whose professional name is Ken Chowder (I understand this is not his real name, but I will not publish his real name for the sake of propriety) published a piece in American Heritage entitled, "The Father of American Terrorism." This is a deeply flawed and unstudied treatment of Brown that purports some sort of objective stance between extremes, although in reality it is subjective, misrepresentative, and untrustworthy.
With all respect to Mr. Chowder, his article is twenty years old, and since its publication he has enjoyed a very fruitful and interesting career as a writer and filmmaker, and has explored a good many themes and received numerous awards. On the PBS page for his documentary, "Frederick Law Olmstead: Designing America," Chowder is described as having scripted over twenty-five documentary films, and as being the author of three novels, with articles published in Smithsonian, Audubon, Travel & Leisure, The New York Times Sophisticated Traveler, Modern Maturity, The New York Times, Geo, The [London] Sunday Times Travel Magazine, Geographical Magazine, and even Reader’s Digest. His website likewise lists numerous awards and artistic residences. He is a talented and accomplished man, and I salute him with all sincerity.
On a side note, too, I realize that some writers may have a cynical and checkered view of Brown and still appreciate him. For instance, I heartily disagree with the opinions of Brown that I have previously heard directly from the mouths of the late historian Tony Horwitz and novelist Russell Banks, but there is no doubt that their work at some level reflects an appreciation of the "Old Man."  Given that it has been twenty years since Chowder published his detrimental piece in American Heritage, I should give him the benefit of the doubt, as I would want to be given to me over some of the opinions I have expressed in younger days.  For instance, reading Chowder's 2000 article, it is interesting to see this on his Twitter account, written seventeen years later: "Currently reminiscing about my idol John Brown. . . ." 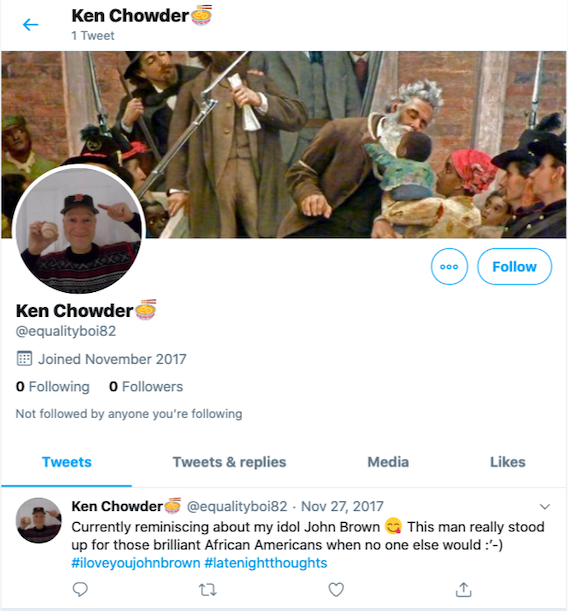 Not knowing Chowder, I'm not sure what to make of this, except that perhaps he changed his mind over the past twenty years after doing further reading and study.
Nevertheless, his "Father of American Terrorism" article (like Rob Kenner's documentary that Chowder also wrote) is still accessible and sadly continues to reinforce the worst, least informed anti-Brown bigotries that yet prevail, especially among many whites in the United States. The problems with Chowder's article are extensive, but frankly I do not have the patience or the time to dissect this piece in great detail as I might have done in 2000. Suffice it to say that Chowder exploits themes like Brown's business failings, the Pottawatomie incident of 1856, and the Harper's Ferry raid of 1859 to suggest insanity and terrorism. While he quotes reasonable historians within the article, he prefers the opinions of fiction authors like Bruce Olds and Russell Banks. At best, Chowder is reductive and simplistic to a fault, such as his tendency to cast Brown's entire business life as failure and to suggest that somehow his life as a failure and a "nobody" drove him to extremes in Kansas and Virginia.  Overall, his thesis is that Brown's legacy gets spun to the right and to the left, but that Chowder himself is presenting some kind of balanced or objective treatment.  To the contrary, his view of Brown lacks biographical foundation, relies more on historical cliches, and leads to the worst tendencies and unstudied conclusions.
Indeed, Chowder's "Father of American Terrorism" itself reflects a peculiar perspective, a kind of summing up of the great hackneyed narrative of John Brown that prevailed in the twentieth century, further inflamed by the tragic events prior to "9/11," when domestic terrorism had begun to rear its ugly head in the 1990s. By referring to Brown as a proto-terrorist, Chowder revealed his lack of historical understanding: after all white society had "fathered" terrorism long before in their attacks upon native people and enslaved Africans. By identifying Brown as some kind of terrorist progenitor, Chowder is catering to the presumptions of white privilege. And by privileging the worst and least studied opinions about John Brown, and by feigning his own objectivity, he revealed his own biases and lack of study.
I hope that an older and wiser Ken Chowder has moved beyond the nonsense that he furnished in his 2000 article. Still, it is unfortunate that his "Father of American Terrorism" continues to haunt and mislead society as an online resource.  It is a work that will finally be remembered, not as a useful article , but as a sample of the unstudied bias and bigotry that largely informed the popular narrative of John Brown in the twentieth century.
Posted by Louis A. DeCaro, Jr. . . at 6:44 PM