The New York-based Swann Auction Galleries, will be holding a sale of African American fine art on October 4, 2018.  (Browse a digital catalogue here.)  The sale features a wonderful offering of paintings, prints, and photographs for collectors with budgets for such things.
What caught your blogger's eye, however, was a particular work by William H. Johnson, who died in April 1970 at about sixty-nine years of age.  According to an article on the black art and culture website, Abri Art and Culture, Johnson was born in Florence, South Carolina in 1901 but moved to New York City at seventeen years of age.  He is marginally associated with the Harlem Renaissance, perhaps because with one exception, during that period he did not choose African Americans as subjects in his work, except for a portrait of his teenage brother done in 1930.  In "Remembering William H. Johnson: A Forgotten Harlem Renaissance Artist," it is stated:

Given that the [Harlem] Renaissance artists were wedded to W.E.B. DuBois’ idea of art as propaganda as well as Langston Hughes’ belief that Negro art ought not only be about Negro people but also should include the Negro working class in rural environments as subjects, it is no wonder that Johnson, like [Henry O.] Tanner, has escaped canonization as a Harlem Renaissance artist.

It was only after Johnson had traveled and studied abroad and returned to the United States, that apparently he began to portray black culture in the United States.  He was a multi-media artist, employing woodcuts, oil, water colors, pen and ink, and  serigraphy [silk screening]. The author states that Johnson’s work "beginning in 1938 and spanning the entire decade of the 40s" embodies the prevalent aesthetics of the earlier Harlem Renaissance--bolder primary colors, larger surfaces, and African American rural folk as well as historical figures like Marian Anderson, George Washington Carver, and including John Brown.

"A John Brown Flight," which Johnson produced around 1945, is one of a small number of impressions that he prepared in screen prints.  The Smithsonian American Art Museum has another copy of this impression in its collection, as also does The Library of Congress collection and the Pennsylvania Academy of Fine Arts. (The Metropolitan Museum of Art also has a copy but it is not currently displayed on their website.) 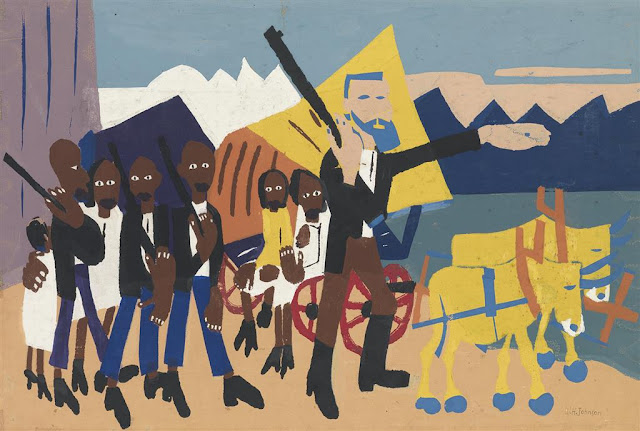 The scene it portrays is familiar to John Brown students, his famous liberation trek that began when he liberated eleven enslaved people from two different slaveholders in Missouri in December 1858, sequestered the fugitives for a number of weeks in a hideout in the Kansas territory, and then escorted them through Nebraska and across the country through Iowa then by rail to Chicago, Illinois.  There, with the assistance of the proto-secret serviceman, Allen Pinkerton, Brown put the fugitives secretly on the railroad bound for Detroit.  At Detroit the fugitives were placed on the ferry that crossed the Detroit River to Canadian freedom.  It was this successful overland trek that affirmed John Brown in his resolve that similar bold, armed-but-defensive measures could be carried out within the belly of slavery itself.


The trek was captured quite differently by Johnson's contemporary, Jacob Lawrence (1917-2000) as part of his twenty-two part series, "The Legend of John Brown."  The particular image is No. 16., subtitled: "In spite of a price on his head, John Brown in 1859 liberated twelve negroes from a Missouri plantation."  This originals of this series are described as having been done in gouache on white wove paper.  Obviously, rather than portraying the liberated people, Lawrence chose to insinuate them in the picture by showing many footprints in the snow, some traces of blood (suggesting either their suffering as enslaved people or the rigors of this hard winter trek, which included pursuit by marshals--remembering that Brown undertook this effort in defiance of the 1850 Fugitive Slave Law).

The only other artistic portrayal of this episode  in John Brown's story that I am aware of is found in a mural series in the Torrington, Connecticut, post office.  Torrington, of course, was the site of Brown's birth in 1800.  The murals, made by Arthur Covey in the New Deal era, were displayed in the old Torrington Post Office, but are now displayed in the new post office in town.  Apparently, Covey, like Johnson, were financed in their work by the Work Projects Administration of the New Deal.


Of the three, Covey's work is the most idealistic and stylized--pleasant pastels make the picture warm, with heavenly light bursting through the clouds, and John Brown marching ahead of his liberated friends, with his rifle on his shoulder--he looks back as if to encourage the party, but his left hand moves forward toward freedom.  This is quite in contrast with Lawrence's image of Brown bringing up the rear, stooped forward to accent the motion, while the entire picture is absent of a human face.  Of the two, Lawrence's image is the most dramatic and evocative of the harsh circumstances of that trek.

On the other hand, Johnson's and Covey's images share similarities.  Johnson's version of Brown also bears a rifle on his shoulder, but looks forward as he points toward freedom.  In both images, there are armed black men, a wagon, and a woman with a young baby.  The latter is part of the historical incident, because an infant actually was born during the sojourn, so twelve entered freedom in Canada in March 1859 under Brown's solemn escort.  Johnson's portrayal of the liberated blacks is done in the style of folk art/primitivism, but most of them stare outward, as if to communicate with the viewer.  In contrast, while Covey's portrayal of the liberated people seems more lifelike, they are entirely part of the story, focused upon Brown almost sacred image.--LD
========

Below is the profile of Johnson's "On a John Brown Flight" from Swann's website:

On a John Brown Flight is a very scarce example of an important print. While living in New York in the early 1940s, William H. Johnson printed a handful of proof impressions from his screenprints, depicting colorful images of both the rural South and of Harlem. Out of the 17 known screenprint images Johnson made in a short period of the early 1940s, On a John Brown Flight is the only image of an American historical figure, and is the largest of any of his prints. Johnson also painted a gouache and pencil version of this subject, and a heroic image of the Abolitionist leader in the 1945 oil John Brown Legend; both are in the collection of the Smithsonian American Art Museum.

This is the only the second impression of this print to come to auction - an unsigned impression was sold at Swann Galleries on February 13, 2014. We have located only four impressions of On a John Brown Flight in the following public collections: the Library of Congress, the Pennsylvania Academy of Fine Art, the Metropolitan Museum of Art, and the Smithsonian Institution. These were experimental and painterly prints, using both screens and pochoir (hand-colored stencils) - each impression has a slightly different registration.