Faith Matters--
Is John Brown Stigmatized Because of His Faith?

In 2009, John Hendrix, author and illustrator of the superb young people's book, John Brown: His Fight for Freedom (New York: Abrams Books, 2009), made this observation in a blog interview: 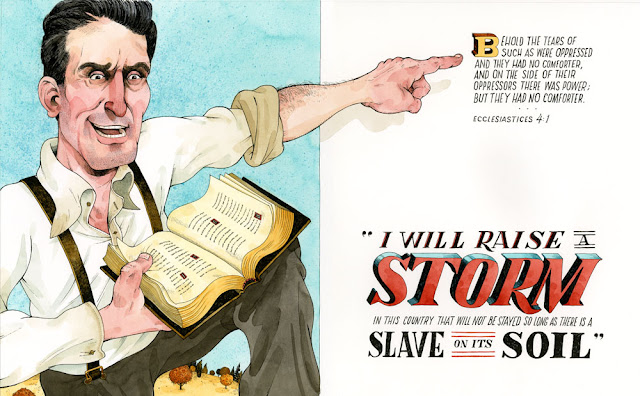 To me, he is a true civil rights hero. And most people think he is a lunatic. We have this popular image of him as an insane loony who killed people with some flawed notion of his own importance, who was punishing innocent civilians because of his religious beliefs. When you really read what he believed and why he was brought to his actions--you see just how unique he was in his own era. A true visionary, and he has been minimized because I think most people are uncomfortable with people who are strongly motivated by religious ideas. So, as a person who shares the faith of John Brown, I feel as though he deserves a more accurate account of his life.1

More recently, Hendrix reiterated this perspective in a podcast interview in New York city, when he stated:


John Brown is a fascinating hero in our country who happened to be a crazy Christian believer.  And so he has been marginalized in my opinion because of his radical faith, not so much because of his violence.  They like to pin it on the violence, but I think if the faith was not there, I don't think we would see it the same way. . . .It's not my mission to rescue his Christianity, but I can't help but think about it.2

Although I think political perspective is bound up in the basis for Brown's cultural demonization, I believe John is correct, and probably more so now than even fifty years ago when the onus of Brown's "violence" tended to be placed on his alleged insanity.  As the two most recently published books on Brown show, secular scholars tend to connect his faith to his "violence."  He is not simply a terrorist, but a religious terrorist.