The Art of Profundity:
How Should We Remember John Brown? A John Hendrix Postscript

"John Brown has been a source of controversy for more than 150 years.  In difficult times, men were forced to make difficult choices.  When faced with the horrors of slavery, John could not bear the thought of inaction. . . . His decision to wage war on slavery in America made him an outlaw and ultimately cost him his life.  But I think that his role in American history is often misunderstood. 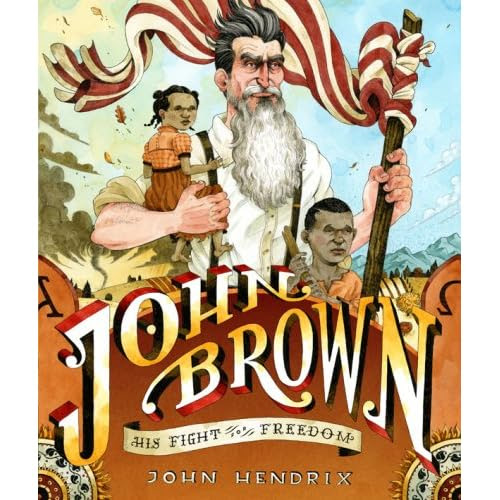 "Today it is hard to grasp the immense sense of desperation felt by John and people like him during the time in Kansas still referred to as 'Bleeding Kansas.'  On those barren plains there were no laws, no protection for families, and no hope for justice.  While reading about those events, I often asked myself, if I saw my neighbors threatened, my family terrorized, and my dearest friends hauled away in chains, what would I do?  Would I strike back against injustice?
"As I continued to study the life of John Brown, I began to admire him because he would not make a truce with injustice.  Now, no man is perfect, and John was no exception.  His ambitious plan to free the slaves was a spectacular failure.  But though the United States1 hanged him as a traitor, I feel we must not dismiss him as a madman.  Terrorists crave destruction and turmoil, and the seed of John's rebellion was compassion. . . ."
"John was a devout believer in Christianity.  He used the Bible's words--that men are loved and valuable to God--as a holy plumb line.  When he held this truth up against the crooked world, he knew things should be different.  I was astonished to read about John's belief that black people should not just be free but equal, which was an idea far outside mainstream abolitionism in the antebellum United States.  His passion for freedom was undisputed.  Frederick Douglass said of John Brown: 'His zeal in the cause of my race was greater than mine.  I could live for the slave, but he could die for him.'
"We should remember John Brown because he was not afraid to fight for the freedom of an oppressed people to which he did not belong.  John was not a vigilante.  The goals of his crusade were never mayhem, self-glorification, or personal vendetta, but freedom for all who were persecuted.  It is difficult to say if his was against slavery was simply 'right' or 'wrong.'  Ultimately, John Brown's contribution was not freedom itself, but an unbridled vision of conviction."

1 Brown was not hanged by the government of the United States, but by the State of Virginia.  However, James Buchanan, the President of the United States in 1859, could have insisted on trying Brown in a federal court since Brown had attacked a federal armory.  Instead,  he opted to favor pro-slavery interests and handed Brown over to Virginia.  So we can say that the Executive Office of the federal government essentially threw Brown to the wolves in allowing Virginia to try him, among other things, as a traitor to the State.  In the long run, this is probably more true, since Brown's intentions were hardly revolutionary with respect to overthrowing the federal government.--LD