One of my favorite John Brown letters has nothing to do with abolitionism, the Underground Railroad, or the Harper’s Ferry raid. But it provides a kind of “snapshot” of the man as he was in 1845, and one that adds color and feeling to our sense of John Brown in his forty-sixth year. This letter was written ten years before he went to Kansas to defend his family from pro-slavery terrorists, and fourteen years before the Harper’s Ferry raid. In fact, it was written a year before Brown and Simon Perkins Jr. set up a wool commission operation in Springfield, Mass., in an effort to curb the abuses of wool manufacturers and empower wool growers (which included some black farmers) in the “west.” 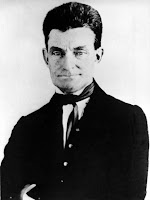 By the time this letter was written, he had already partnered with Perkins in Akron, Ohio, and was busily tending to the magnate's flock, which Brown had groomed and cultivated to the point of national notoriety (Perkins' flock was praised in farmers’ journals, etc.). In fact, it was during much of the 1840s that Brown traveled widely in the country, examining and purchasing livestock, and fairly well establishing his expertise as among the leading specialists in fine sheep and wool in the U.S. in the antebellum era. Of course, he was mixing anti-slavery talk and networking with Underground Railroad folks amidst all this wool business, and of course Underground Railroad work as the occasion arose.
This letter, written on November 25, 1845, provides little or no context, but we can surmise that he had made a business trip to the east, probably including his Connecticut home state, apparently to purchase sheep for the Perkins flock. There is a gap in his extant letters between May and November 1845, so we don’t know the exact nature or extent of this trip, but it must have taken him away from home for a few weeks if not longer.
What makes this letter particularly interesting is that he wrote it one week into his westward trip aboard an Erie Canal boat. Brown thus describes himself as being “wrap[p]ed up nice in a Buffalo skin,” in the “mid Ship” section, along with his sheep. In his famous 1857 letter to the son of “Secret Six” supporter, George L. Stearns, Brown would refer to himself as having been a “Practical Shepherd” in youth. Here he somewhat humorously refers to himself as a “Shepherd without doubt”; but his humor reminds us of his deep love for the labors and matters of sheep farming, and livestock in general. Brown studied sheep intensively and extensively, experimented in and improved upon medical cures for their ailments, and claimed to have known his sheep by face as we know people. However uncomfortable this setting may have been, then, it is difficult to imagine that Brown was unhappy--encamped among his flock in a mid-ship section of a 19th century canal boat, slowing moving across New York State in the chill of early winter.
According to the website Ship Wreck World, canal boats in this period (pre-1850’s) were limited to 78-ft. in length due to the size of the original 90-ft. locks of the Erie and Oswego Canals. Canal vessels like the one Brown boarded were “line boats,” designed to carry freight, “but they also carried passengers as well as livestock.” Fare on line boats cost less than the fare for “packet boats,” which only carried passengers with hand-held luggage. Since travelers on line boats could set up tents and cook on deck,” we can imagine Brown naturally did so during this week-long trip. Ship Wreck World says line boats like Brown’s were slower than packet boats, covering about sixty-miles-per-day.
Since they only ran during daylight hours, this explains further why it took Brown a week to get (most likely) from the eastern point of the Erie Canal near Troy, New York, to Union Mills, New York, which Brown himself sets at four miles from Buffalo.  Finally, according to John Percy, a historian of the Erie Canal, this historic waterway was only opened from late February through early December.* So Brown was cutting it close on this homeward trip. No wonder that he informs Mary that if he cannot get a “water passage” from Buffalo to Cleveland—that is, a steamship, he would herd the sheep on land until he could find a place to store them for the winter and then take a stage coach into Akron. However, he understandably did not want to herd the sheep along Lake Erie facing harsh winter elements, walking up to his knees in mud. Obviously, he had “been there and done that” in previous years, and preferred not to revisit such travail.
Brown assures Mary that he is well, and directs “the boys” to care for matters “at home,” which undoubtedly means both domestic chores as well as matters of the Perkins farm and flock. The “boys” here are 22-year-old Jason, 21-year-old Owen, and 15-year-old Frederick (the latter would be shot dead in Kansas in 1856). In the home were also 16-year-old Ruth, 10-year-old Watson, nine-year-old Salmon, and baby Amelia born in June that same year (she would die in a tragic household accident in October the following year, 1846)
The letter is found in the valuable Brown Family Collection held by the Henry Huntington Library, Manuscript Collections, in San Marino, California. The original spelling and format is preserved in my transcription below, including Brown's beloved ampersand in place of "and."


I have progressed thus far on my way
homeward verry well, but am at present weather bound
for a few hours at least. If things appears favour-
able when I get into Buffalo, I intend to take a
water passage to Cleaveland; but if otherwise I
think I shall drive the sheep I have untill I can
find some good place to leave them till the mud
freezes up, & take the Stage myself for home.
I cannot think of a much longer abscence at this
time nor of driving up the Lake through mud up
to my knees facing the rain, & snow together.
I am just going to try my Seventh night in the mid
Ship of a Canal boat, among the sheep (a Shepherd
without doubt) wraped up nice in a Buffalo skin
I trust the boys will take good care of all at home; &
hope to see you all well again shortly. My own
health is good, & hope you will not be over anx-
-ious on my account. If I get detained unexpect-
edly you may hear from me again