Brown Recounted Battle Of Osawatomie
The Battle of Osawatomie — fought at the site of present-day John Brown Memorial Park on Aug. 30, 1856 — was the largest battle during the Bleeding Kansas time period.
John Brown wrote to his wife, Mary Day Brown, and his family in North Elba, N.Y., on Sept. 7, 1856, recording his description of the Battle of Osawatomie [Reference: F. B. Sanborn, Life & Letters of John Brown, pp. 317-18]. However, he also had to tell Mary that her son Frederick had been killed during the battle. “On the morning of the 30th Aug., an attack was made by the ruffians on Osawatomie numbering some 400 by whose scouts our dear Frederick was shot dead without warning, he supposing them to be free state men as near as we can learn,” Brown wrote.
After telling Mary about her son’s death, John continued to describe the Battle of Osawatomie. He was camped where Osawatomie State Hospital now stands and reported to Mary that soon after killing Frederick, pro-slavery forces killed the Rev. Samuel Adair’s cousin, David Garrison. “One other man, a cousin of Mr. Adair, was murdered by them about the same time,” Brown wrote. 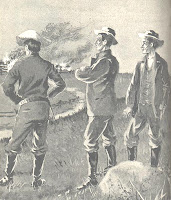 Brown had been recruiting guerillas and soon had a chance to fight for the free-state cause.
“I was about 3 miles off where I had some 14 or 15 overnight I had just enlisted to serve under me as regulars,” Brown wrote. “There I collected as well as I could with some 12 or 15 more & in about ¾ of an hour attacked them from a wood with thick undergrowth. With this force, we threw them into confusion for about 15 or 20 minutes, during which time we killed and wounded from 70 to 80 of the enemy as they say and then we escaped as well as we could with one killed while escaping, two or three wounded and as many more missing. Four or five free-state men were butchered during the day in all.”
Brown’s son, Jason, eschewed his pacifism and fought beside his father in the Battle of Osawatomie, and John Brown stated with fatherly pride that he “fought bravely by my side during the fight and escaped with me he being unhurt.” John Brown reported that he was wounded during the battle: “I was struck by a partly spent grape canister or rifle shot, which bruised me some but did not injure me seriously.”
Brown devoted the last part of his letter to assuring his wife and family that everything was going to be fine, drawing on his interpretation of the Christian faith.
“Hither to the Lord hath helped me, notwithstanding my afflictions,” he wrote. “Things seem rather quiet just now; but what another hour will bring I cannot say.”
John Brown wrote this in an effort to calm his wife’s and family’s fears. The letter is but one view of a battle that was seen by many in different ways.
Source: Grady Atwater, “Brown Recounted Battle of Osawatomie.”  Osawatomie Graphic on line [Osawatomie, Kan.], August 18, 2010.
— Grady Atwater is administrator of John Brown State Historic Site.
Posted by Louis A. DeCaro, Jr. . . at 11:40 AM