John Brown Documented His Own Story

I have been pondering the way in which John Brown's practices reflected his own sense of historical purpose and how this is apparent in his manner of documentation.  Despite his famous tight-lipped manner when it came to discussing his plans, Brown took pains to document his correspondence and movements.  For instance, his memorandum books of 1858-1859 consist of daily notations of his correspondence and details.  Pictured is a page from his memorandum book of 1858.*  A good deal of biographical information is available in this page: his departure from Springdale, Iowa, on January 15, to go east; a "shopping list" detail, to buy "camp matches" (which I assume to be the newly invented phosphorous red-tipped safety matches); the box number of John Jones--apparently, John T. Jones, a First Nation free state man living in the Kansas territory; a series of letters to family and friend Frederick Douglass, showing the beginning of his nom de guerre, Nelson Hawkins (a name he humorously borrowed from a friend of the family in Akron, Ohio); the note that he was in Douglass' home office and paid him money on January 28, and another letter, under the name of Nelson Hawkins, to his son Owen about sending clothing. 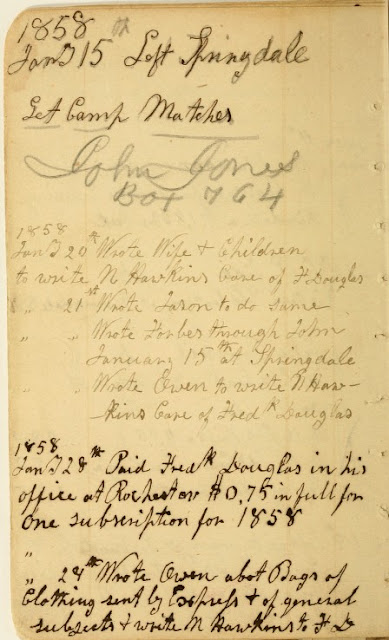 Of course Brown kept records for himself, particularly contact information and the ability to keep track of his correspondence was important to him. Brown's memorandum book from the late 1830s is also extant, and it is to a degree similar.  We should also remember that in the text-based culture of the 19th century, people read far more, wrote far more, and documented things far more than we do on a daily basis.

On the other hand, I believe there is also a sense of the chronicler of his own story here, the intention of leaving behind evidence of his activities, details of his efforts, a kind of documentation of his liberation story.

Although his plans ultimately failed, we should remember that Brown believed himself to be working for a great purpose and that the force of history, if not divine providence, was both leading him forward and pressing him onward.  The road to Harper's Ferry was an extremely hopeful road, not just because Brown himself was famously optimistic by nature, but because the endeavor in opposing slavery on a grand scale seemed a profound historical breakthrough in his mind and in the minds of his followers.  They knew that whether they succeeded or failed, they would go down in history as having struggled against slavery.  Brown himself was pregnant with the belief that the doom of slavery in the United States was immanent, and he was even more resolved in his conviction after failing at Harper's Ferry.   But in 1858-59, he obviously did not know what we know--that he was going to fail.  Brown and his men considered it very possible that they would succeed or else they would not have made the venture.

The idea of John Brown being his own documentarian seems particularly clear in the following segment of a letter from his son, John Jr., to John H. Kagi, Brown's stalwart lieutenant, dated August 11, 1859.* 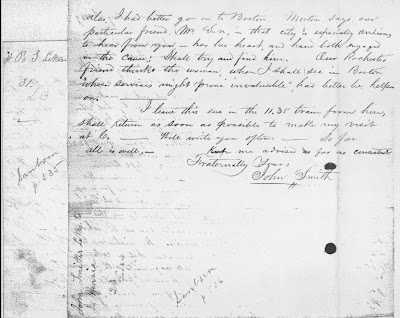 This portion is from the second page and is in the fine handwriting of John Brown Jr.  Writing in the busy summer months prior to the raid, Junior is writing to Kagi, who has been stationed in Chambersburg, Pa., by Brown, where he could not only receive incoming shipments of weapons from the west, but correspondence, and recruits.  In the letter, Junior refers to an assistant to Gerrit Smith (Morton), Sanborn (Mr. S-n), Frederick Douglass ("our Rochester friend"), and Harriet Tubman ("the woman").  Note that John Jr. signs as "John Smith."  The entire family's correspondence shifted to the Smith pseudonym as surname for the purpose of the raid, John Brown having become "Isaac Smith" (a name which I have shown to have been borrowed from an umbrella manufacturer in New York and Boston).
More interesting, however, are Brown's subsequent notations on the left column of the letter.  Next to Junior's reference to "Mr S_n," Brown writes: "F B S Letter."  This is an identifying note, being the initials of Franklin Benjamin Sanborn.  Yet the notation is not so clear that just anyone at the time could figure it out.   My suggestion is that Brown was making that notation for posterity, believing that someday historians and writers would have sufficient information to figure out the identity of "F B S." Just below this is the number "31," which is not clear.  Is it a reference to the date of Sanborn's letter, or is it the proposed date of Harriet Tubman's planned meeting with Sanborn in Boston (i.e., August 31)?  On this letter are two subsequent references to documents in Sanborn's Life and Letters, obviously being scholarly notations of no consequence to this discussion.  But the final notation is quite meaningful.  On the left column, Brown writes vertically in clear script: "John Smiths Letter to J Henrie."  While it was not unusual for the addressee to make a note on a letter, listing the writer (perhaps to verify having received it), once again Brown is doing more than mere household notation.  He is making certain that future readers would be clear as to the author and addressee, so he writes out both names in full.  In other words, he does not see this as a simple letter, nor even as an important letter for his purposes.  He sees it as a historical document.
The fact that Brown saved his correspondence suggests he was "archiving" his materials, hopefully to chronicle the successful overthrow of slavery and the re-birth of the United States as a nation committed to freedom.  Had he moved with expedience and determination from Harper's Ferry in 1859, perhaps Brown's papers would have far greater value to our nation than they do today.  Yet even in his failure and the scattering and loss of some of his papers, what remains of his "revolutionary archive" is the record of a man and his devoted young followers, not motivated by terroristic and destructive impulses, but by a desire to bring an end to slavery and oppression.
John Brown knew that he would be remembered.  In the gathering and notation of his papers, he has endeavored to help that remembrance.
[*Note: the John Brown memorandum books are in the possession of the Boston Public Library Collection, Boston, Mass., and the letter of John Brown Jr. to John Henry Kagi, 11 August 1859, is in the Dreer Collection, Historical Society of Pennsylvania, Philadelphia, Pa.]
Posted by Louis A. DeCaro, Jr. . . at 10:16 AM