Mary Brown's First Home in California
Dottie Smith, a writer for the Redding Record Searchlight [Redding, Calif.] has a brief article in her Redding.com blog about the first residence of John Brown’s widow, Mary Ann Brown, and family, after they relocated to Red Bluff, California in 1864.   According to Smith, California Governor Frederick F. Low “headed a statewide committee to raise funds” sufficient “to build a small house in downtown Red Bluff at 135 Main Street.”  Smith says that the Brown family lived there for two years peacefully when things turned sour: one Amanda Hoag, a relocated Southern racist, openly criticized the Browns and endeavored to use the law to prevent Mary Brown from becoming the legal owner of the property.  Although Hoag’s efforts failed, Smith writes, Mary Brown decided to move her devoted family to a more peaceful setting at Rohnersville in Humboldt County, near the coast.  Smith says that tomorrow (Fri., Aug. 5) will feature the whole story of Mary Brown in Red Bluff, so check out The Record Searchlight.

Source: Dottie Smith, “Abolitionist John Brown's widow moved to Red Bluff to escape public scrutiny.”   Redding.com [Redding, Calif.], 4 Aug. 2010.
I should add that I am not confident that Ms. Smith’s details are entirely reliable; she mistakenly refers to Salmon Brown as Mary Brown’s stepson. But he was her son, not stepson.  Salmon was born on October 2, 1836 in Hudson, Ohio, not long after the John and Mary relocated from northwestern Pennsylvania to John's old tramping grounds in the Western Reserve.  The best article on this chapter in Brown family history is Jean Libby’s “John Brown’s Family in California,” published in The Californians, an excellent publication from Allies for Freedom.  Click on the picture below to order from Amazon.com. 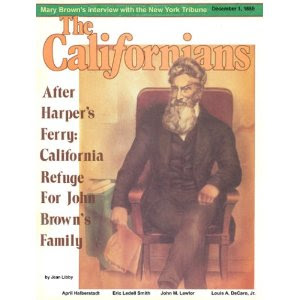 Nice to get info out there about Mary, Red Bluff and the family after the hanging of John Brown......but there are so many errors in the linked article it made me cry.

Only John Brown was hung on Dec 2, the other raiders were hung later.

Salmon was Mary's son with John Brown, not her step son.

Mary had THREE daughters who moved from NY to CA with her - Annie (my direct ancestor), Sarah and Ellen.

The Governor of CA was on the committee, but the people of Red Bluff started and maintained the momentum of the John Brown Widow Fund.

I am a direct descendant of John and Mary Brown and have spent years researching and creating the most updated and current genealogy of the John Brown family, I have asked that they publish corrections to the lineage of Salmon and the number of daughters that traveled with Mary across the States, so future researchers and historians are not confused. Thank you