Kansas News & Views
The Underground Railroad in Topeka
Local historian Dee Puff talks about underground railroad sites in Topeka with the familiarity of a homeowner talking about past neighbors or describing a local landmark before it changed 20 or 30 years ago.
But Puff is talking about houses, tunnels and camouflaged hideouts that sheltered people fleeing slavery more than 150 years ago during the fiery days of territorial Kansas and the Civil War.
In Topeka, Puff, a longtime researcher, has identified 23 sites that were underground depots in Topeka and in Shawnee County outside the capital. The city and county had one of the most sophisticated underground railroad systems in the United States, Puff said, and it never lost anyone fleeing slavery during its operation.
Topeka had a number of depots or stations, the railroad jargon used to identify a hiding place where people fleeing slavery and headed north to Canada could rest and eat, and tired horses could be traded for fresh mounts. People were led from station to station by guides called conductors.
Three of Puff's favorite sites are the Sheridan homestead, 2303 S.E. Pennsylvania; the Armstrong house, 429 S.E. Quincy; and the Owens house, 3212 N.W. Rochester. Abolitionist leader John Brown and his men would hole up at the sites, Puff said. Conductors stationed near Topeka included John Henri Kagi, Aaron D. Stevens, John C. Cook, George P. Gill and Richard Realf.
The Sheridan homestead had a tunnel beneath it, and at the Armstrong house, 30 travelers could be hidden in a large sugar barrel built beneath the house. The original Sheridan and Armstrong buildings are gone, but the Owens house survives.
The underground railroad in the west and how it influenced the national and territorial struggle on whether Kansas would enter the Union as a slave state or a free state will be the topic of a four-day conference in Topeka starting July 28.
"Kansas has a big story that is nationally significant," Diane Miller said of the state's ties to the underground railroad. Miller is the national program manager of the National Park Service National Underground Railroad Network to Freedom Program in Omaha.
Excerpted from Steve Fry, “Underground Railroad Dotted Area.”  The Capital-Journal online [Topeka, Kan.], 13 June 2010
------------ 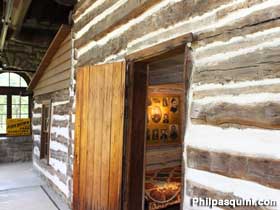 Inside a substantial native rock building is the cabin of  Samuel & Florilla (Brown) Adair, John Brown's sister and brother-in-law.  The Adairs preceded the Browns in going to the Kansas territory, where the Reverend Adair, a staunch abolitionist like his wife, sought to engage in Christian ministry.  Caught up in the terrorist invasions by pro-slavery forces, the Adairs supported their militant brother, John Brown, although Samuel was skeptical of Brown's ideas regarding the use of force.   The avowed militant abolitionist took shelter here while he was in Kansas, particularly during a period of extended illness in 1858. The John Brown State park maintains the Adair cabin its original condition, and offers the visitor an encapsulated history of the turbulent times when pro-slavery and those opposed to slavery were in armed conflict in Kansas and Missouri. The building was constructed in 1928, when the original cabin was moved from its original site to the new park.
Adapted from Roadside America.com (26 June 2010).  Photo by Phil Pasquini.
---------------
Kansas Notebook
Grady Atwater: “Raid on Lawrence Sparked Retaliation”
John Brown was cooking breakfast for his men on the morning of May 23, 1856, and was incensed. Pro-slavery forces had raided Lawrence on May 21, and the peaceful abolitionists had stood by and watched while the free-state town was sacked. Grady Atwater
Jason Brown, one of his sons, listened while his father told Theodore Wiener, one of his men: “Now something must be done. We have got to defend our families and our neighbors as best we can. Something is going to be done now. We must show by actual work that there are two sides to this thing and they cannot go on with impunity.”
Brown conducted a war council, and John Brown Jr. stated: “It was now and here resolved that they, their aiders and abettors who sought to kill our suffering people should themselves be killed and in such a manner as to cause a restraining fear.”
Brown was going to strike pro-slavery forces that had threatened free-state settlers in a preemptive strike, planning to make the raid a statement that drove home the point that free-state forces were willing to fight. Brown selected four of his sons (Owen, Frederick, Salmon, and Oliver Brown), his son-in-law Henry Thomson and militant abolitionists Theodore Wiener and James Townsley for the raid. The abolitionist guerillas prepared, and H.H. Williams gave Brown a list of the most dangerous pro-slavery men in the area along Pottawatomie and Mosquito creeks.
Brown and his raiding party rode to Pottawatomie Creek and hid during the daytime on May 24, 1856. Night fell, and Brown led his men down to the cabin of the Doyles, who had worked as bailiffs for the pro-slavery court ran by Judge Sterling Cato. Their efforts to enforce pro-slavery laws had put their names on Brown’s list. Salmon and Owen Brown killed James, Drury and William Doyle with swords. John Brown spared the life of John Doyle because he was a mere 14 years old. Brown and his men then moved on the cabin of Alan Wilkerson, who was a member of the pro-slavery territorial legislature; Wiener and Thompson killed him with swords. Midnight struck, and Brown’s forces went to the cabin of James Harris; Wiener and Thompson killed pro-slavery advocate William Sherman with swords. John Brown questioned Jerome Glanville and James Harris and found that they were not active in the pro-slavery movement and let them go.
The raid created a firestorm of conflict and exacerbated tensions between pro-slavery forces in Kansas. Proslavery forces rode into Kansas Territory, seeking revenge. Osawatomie was a prime target, for it was known as Brown’s headquarters. Indeed, the Pottawatomie Massacre led to the Battle of Osawatomie on Aug. 30, 1856.
Brown had wanted to make the statement that free-state men would strike back and did so in a dramatic fashion.
Source:  Grady Atwater, “Raid on Lawrence Sparked Retaliation.”  Osawatomie [Kan.] Graphic online (21 July 2010)
— Grady Atwater is site administrator at the John Brown State Historic Site in Osawatomie, Kansas.