Vignette
"Never for One Moment!"  John Brown as Remembered by His Daughter Ruth 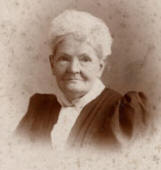 "The very idea of slavery is galling  to my feeling that I can hardly endure the thought.  How many times I have heard my dear sainted Father, say he 'hoped to live to see the day when the slaves would all be free.'  What an awful sin is slavery, yet how quietly the people of this country sleep over it.  How many sleepless night Father used to pass, thinking of the poor slaves, years before he made an attempt to rescue them.  His great kind heart was ever 'awake to their wrongs.'"
Ruth Brown Thompson to Mary Stearns, June 10 (13), 1860, Stutler Collection, MS05-0061.
"Father had been father and mother to me, and the separation was terrible to me.  When I was a little girl I used to go off in the woods by my self and cry thinking how I should miss him if he should die.  I long to see him so now, that it seems as though I can hardly wait."
Ruth Brown Thompson, Pasadena, Calif.,  to Nettie Boynton, Brasher Falls, NY, November 19, 1898, in archives of the St. Lawrence County Historical Association, Canton, N.Y
"A few years ago when in conversation with a daughter of old John Brown I unwisely asked her if on any occasion she had ever felt ashamed that her father died on the gallows.  With an almost indignant expression she immediately replied, 'Never, never for one moment!'”
Reminiscence of a conversation with Ruth Brown Thompson by the Rev. Nathan R. Johnston.  Quoted in Looking Back from the Sunset Land (1898)
Posted by Louis A. DeCaro, Jr. . . at 11:34 PM