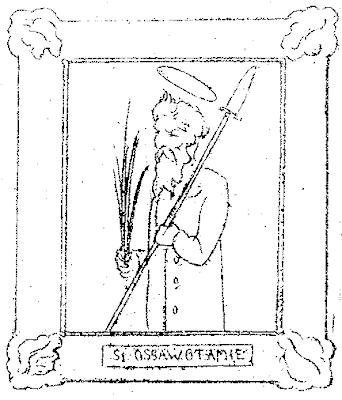 Adalbert John Volck (1828–1912) was a German (Bavarian) born artist whose pro-Confederate work was done under the pseudonym, “V. Blada.”  A dentist by profession, Volck emigrated to the United States sometime after 1848, when a national revolution in his native country seems to have fizzled out.  Soured by this outcome, Volck’s passion for dissent and undoubted racism perhaps drew him to the cause of the South.  He first resided in St. Louis, Missouri (where a considerable German immigrant population was located), and then in Baltimore, Maryland, where he remained the rest of his life. Volck earned his doctorate in dentistry from the Baltimore College of Dental Surgery in 1852 and established a practice in that city, becoming an active representative and leader in his field.
Despite his advocacy of republican revolution in Europe, Volck did not hold similar hopes for the blacks slaves in his new country.  To the contrary, he became a strong pro-slavery and anti-Union figure, and during the Civil War covertly published his clever but polemical political cartoons attacking northern leaders, especially President Abraham Lincoln.  Furthermore, Volck worked as a smuggler for the Confederacy and also acted as a courier for Confederate President Jefferson Davis.

Although his work was not widely circulated during the Civil War due to federal surveillance, Volck’s work made an impact.  Most notable was his scathing cartoon, “Lincoln Writing the Emancipation Proclamation” (1864).  In this cartoon, he pictures President Lincoln as the devil writing the act to free enslaved blacks in Confederate territory.  The clever drawing shows a small demon holding Lincoln’s ink well, and the President’s foot resting on top of the Constitution of the United States.  There are other symbols of evil, but most notable are two pictures portrayed on the wall of the President’s study: a macabre slave rebellion in Santa Domingo, picturing the murders of white women and children by black slave rebels; and an icon of “St. Ossawotamie” – John Brown holding a plant and a pike, with a halo over his head.  In portraying this images on Lincoln’s wall, Volck was obviously rendering the erroneous southern belief that Lincoln and Brown were of the same outlook, and that Lincoln’s Emancipation Proclamation would result in the widespread slaughter of white slave masters in the South. 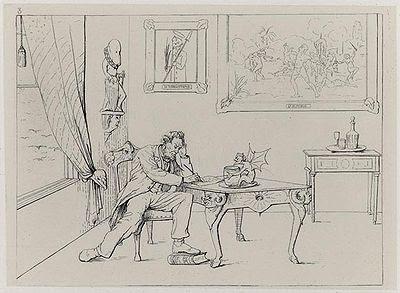 While Volck’s portrayal of the John Brown icon (“St. Ossawotamie”) was intended as a condemnation of emancipation and black freedom, it is only fitting that his clever art be turned against him and in favor of Brown.  By the way, for those who don't know, "Ossawatomie" was the name of a burgeoning free-state settlement in the Kansas territory, named for the confluence of the Osage River and Pottawatomie Creek.  Although Ossawatomie was attacked by a large force of pro-slavery thugs in 1856, Brown was nicknamed "Ossawatomie Brown" because of his valiant fighting there.  He became so famous at the time that a play about "Ossawatomie Brown" was performed on Broadway.


By cutting away the “St. Osowatamie” portrait from the hostile context intended by Volck, the purpose of the image has been changed: “St. Ossawotamie” can now be viewed as an admiring if not amusing image of John Brown.  Volck was an enemy of freedom and was hostile to the legacy of Brown; but by “liberating” his cartoon of Brown from its racist framework, Volck’s skillful hand is forced to provide us with an iconic tribute to John Brown the abolitionist, who was not only a saint in the Protestant sense of the term, but a saint-of-a-guy.