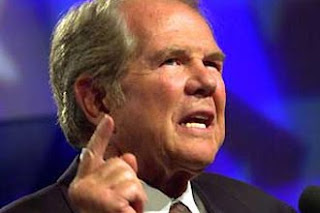 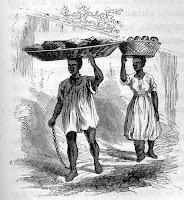 Haiti, Slavery, and Muhammad Ali: Reflections on "Pat" Robertson's Family Legacy
As a so-called evangelical, minister, and scholar I do not normally use this blog to write about current themes or express my opinion on matters beyond the limits of the John Brown study. However, once in a while an issue arises that seem so spiritually apropos of the Brown theme, or so strongly interconnect in principle to his life and values, that I have to make an exception. Certainly the recent remarks about the devastating Haitian earthquake by televangelist mogul, right-wing activist, and Christian Zionist "Pat" Robertson demand some sort of evaluation and critique.
I. Evangelicals, John Brown, and Haiti
According to a report published by ABC news on-line (Jan. 14), Robertson said: "You know ... something happened a long time ago in Hait . . . . They got together and swore a pact to the Devil. They said, 'We will serve you if you get us free from the French.' True story. And so, the Devil said, 'OK, it's a deal.' And they kicked the French out. . . . You know, the Haitians revolted and got themselves free. But ever since, they have been cursed by one thing after another."
It is actually a popular notion among many white evangelicals in the U.S. that Haiti's impoverished plight is specifically the result of the prevalence of "voodoo," or witchcraft, in that country. While I hardly embrace the practice of "voodoo" myself, I find such reasoning speculative and self-serving. As Robertson's words may reflect popular thinking among many white evangelicals, it suggests that perceptions of Haiti are steeped by generations in a politically conservative and culturally condescending mindset. This accepted church pew wisdom, that Haiti's historic plight can be reduced to the practice of African witchcraft, reflects ignorance, not malice. Many white evangelicals simply do not comprehend the whys-and-what-fors of Haiti's place in the western world, nor are they sensitive to the nature of systemic racism in the historical development of U.S. domestic and foreign policy. In this regard they are no different than most whites in the U.S., who have no idea that the Haitian liberation movement was not only rooted in the same political ideas underlying the "American Revolution," but that the Haiti's remarkable triumph over the French actually prevented Napoleon Bonaparte from invading North America. Had it not been for Haiti's bold stance for independence, there would have been no Louisiana Purchase and Napoleon may very well have advanced in North America to the undermining of this nation.
In contrast to "Pat" Robertson, the evangelical Christian abolitionist John Brown was a great admirer of Haiti's revolution, especially the heroic leadership of Toussaint L'Ourverture, the carriage driver-turned-brilliant military commander who led Haiti's forces, blocked the Napoleonic invasion, and ultimately died in a European prison, after being betrayed into the hands of the French tyrant. Brown studied Toussaint with great zeal and read anything he could find on the black hero and his revolution. To Brown, the liberation of Haiti was not the work of the devil, but rather the kind Providence of God and a true demonstration of the fact of black equality.
In turn, the Haitian people loved John Brown's legacy. After his hanging in Virginia, the Haitian people mourned Brown's death in ceremony and celebrated his life and legacy by naming a main thoroughfare after him. Haitians collected money to send to Brown's widow, and Haitians opened their arms to African Americans wishing to expatriate themselves to the free black nation. Among those who supported this effort in conjunction with the Haitian government were Brown's son, John Jr., and his first biographer, James Redpath. Redpath's association with Haiti is another story in itself, but his admiration for Brown and Haiti is perhaps best exemplified by his 1863 publication of John R. Beard's Toussaint L'Ouverture: A Biography (1853), very likely the same biography that John Brown read so devoutly during his last days in Virginia. Redpath went beyond Beard, however, by personally seeking--and finding--Toussaint's own prison autobiography, which he included with the Beard biography.
Redpath notes in his prefacing remarks that in his day there were "three versions of Haytian [sic] history,--the white, the black, and the yellow: the white representing the pro-slavery party, the black that of the negroes, and the yellow that of the mulattoes. The abolitionists of England and America have adopted the negro standard." Redpath understood then, as we should now, that one's perspective on Haiti is defined by one's politics, and that in the U.S., politics are inseparable from issues of race and racism--and this is precisely the point of "Pat" Robertson's reading of the recent tragedy in Haiti. His interpretation of the Haitian earthquake is actually his interpretation of Haiti, and his interpretation of Haiti is essentially that of the pro-slavery party in its most refined and advanced version.