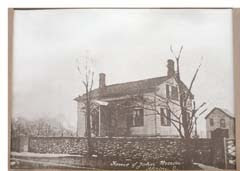 John Brown Remembered in Akron, Ohio
Akron, Ohio - Oct. 16, 2009 marked the 150th anniversary of John Brown's raid on Harpers Ferry.
This man, who has been called both a martyr and a madman, invaded Harpers Ferry in 1859 with 21 recruits and one mission – bring down the federal armory of Harpers Ferry in Virginia and get ammunition to give slaves to help them rise up against their oppressors.
According to Leianne Heppner, interim executive director of the Summit County Historical Society, Brown has been considered one of the Akron's most famous residents in history. “John Brown spent majority of his life in Summit county and I think many people think of John Brown as the abolitionist who attacked Harpers Ferry and they don't realize that he grew up in their neighborhood,” Heppner explained.
Brown lived in Akron while he ran a sheep business with Simon Perkins for 10 years between 1844 and 1854. While he worked with Perkins, he took up residence caddy-corner from the Perkins' Stone Mansion in what is now known as the John Brown House. During his time in Akron his anti-slavery stance was not halted as Brown made connections with other abolitionists.
“He spent his extra time and extra money on the anti-slavery cause,” Heppner said. “He was meeting with individuals like Frederick Douglass and Harriet Tubman.”
According to Heppner, Brown did not hesitate from actively participating in the abolitionist movement, even before the raid, while he was in Akron. “There are also historical people who say they saw dark faces on the other side of the fence where John Brown lived and that he had individuals at his home here in Akron and it was well-known that he was transporting people on the Underground Railroad,” Heppner claimed.
John Brown's raid on Harpers Ferry may have ended with him being hanged for his actions, but he has still been recognized as the man who ignited the spark that would later bring on the Civil War. To help Akron residents remember the man who has gone down in history as one of the most controversial and also revered figures, the Summit County Historical Society has been hosting open houses of the John Brown House since June. The next open house, which is free to the public will be held on the Tuesday before Thanksgiving, Nov. 24, from 3 p.m. to 6 p.m.
“Some people look at him as a martyr, others look at him as a madman, but in actuality he was a neighbor to many people in this area and it's significant that we remember him not just as a national figure but as a local resident,” Heppner said. “He did something about an issue he disagreed with and many people get upset because he killed people in the process, but the way I look at it is this man was willing to give his life to end something that he abhorred, which was slavery.”
Along with the John Brown events, the historical society is also offering tours of Simon Perkins' (John Brown's old business partner) Stone Mansion.
According to Heppner, these are ghost tours, so they are only for people who are 16-years-old and up. Visitors will get to learn about the history of the Perkins family, coupled with some ghostly tales and take part in a guided tour through the mansion in the dark. “It's a unique opportunity to see the house in a different light . . . or non-light,” Heppner said with a chuckle.
“We do emphasize the different family members who are known to haunt the house,” she added.
The next ghost tour will be on Friday, November 13th, with a book signing with the author of Ghosts of Zoar Ohio. Hour long ghost tours will begin at 7:30 p.m. The cost is $15 per person. All tours are by reservation only.
As the celebration of Brown's life continues through the season, there will also be an event focusing on the 150th Anniversary Commemoration of John Brown's Execution on Dec. 2. This will be held at the First Presbyterian Church in Akron at 11 a.m. the John Brown House will also be open from 3 p.m. to 6 p.m. More information on these events can be found on the Summit County Historical Society's Web site www.summithistory.org.
According to Heppner, these upcoming events the historical society will host may focus on the area's history, but these tales from the past are never a mundane experience. “I think that it would be great if people have an interest in their local history,” Heppner said. “The Summit County History Society has been in existence for 85 years, collecting the history of the individuals in our community and we would like people to join us in remembering them and also having a little fun in the mean time.”
Source: Katie Young, The Suburbanite on-line [Akron, Oh.], Nov. 15, 2009
Posted by Louis A. DeCaro, Jr. . . at 10:48 PM