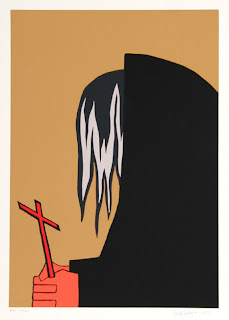 This fall marks the 150th anniversaries of John Brown’s anti-slavery raid on Harpers Ferry, Virginia, a pivotal event in igniting the Civil War, and his Dec. 2, 1859 execution. To commemorate Akron’s most famous historic resident, the Akron Art Museum presents selections from Jacob Lawrence’s print series The Legend of John Brown. The exhibition will be on view from Oct. 16 to Feb. 14, 2010. Lawrence, one of the most significant American artists of the 20th century, was the first African American to depict the story of the controversial white abolitionist.

Lawrence’s screenprints, which are owned by the museum, will be joined by related images and artifacts from the Summit County Historical Society and the Akron-Summit County Public Library Special Collections Division.

A Northerner, Brown (1800-1859) worked on farms in Northeast Ohio before moving to Akron in 1844. An expert breeder of sheep and respected authority on wool, he attracted the attention of fellow shepherd Simon Perkins, Jr., the son of Akron’s founder. The two formed a business partnership and Brown moved into a two-room cottage yards away from Perkins’ own mansion.

Brown’s religious convictions led him to oppose slavery. While working with Perkins, he remained an active abolitionist and regularly housed slaves moving through the Underground Railroad in his Akron home. Now part of the Summit County Historical Society, it houses a permanent display about Brown’s life.

In contrast with the northern pacifist attitude, Brown believed that militant actions were the only way to end slavery. In the mid-1850s, he organized covert attacks in an attempt to liberate slaves and bring down the pro-slavery establishment. In 1859, with a company of 21 men—white and black—he led a raid on the federal armory at Harpers Ferry, Virginia. He was captured and hanged for treason on December 2. While historians agree that Brown’s actions helped spark the Civil War, his dogged determination and the violence of his methods have been hailed as both heroic and foolhardy.
Jacob Lawrence’s screenprints frame the story as a narrative, which is the depiction of a particular story in either painted or graphic form. Each image presents a specific incident in Brown’s dramatic life. Rather than depicting these events in a realistic manner, Lawrence tells the story using sparse details rendered with simplified forms and vibrant colors, which heightens each scene’s emotion.

Lawrence (1917-2000), who lived in New York City during the Harlem Renaissance, was the first African American artist to be included in the collection of the Museum of Modern Art, New York. He was a storyteller who used the visual arts to interpret and disseminate important events in American history. His prominence as an artist undoubtedly helped perpetuate the remarkable story of John Brown’s life as an abolitionist.

This exhibition is organized by the Akron Art Museum and supported by a gift from Akron General.

Akron-Summit County Public Library John Brown exhibit
On View through December 31
Visit Special Collections to see the Summit County’s John Brown exhibit, including historical artifacts from Akron during the era and small glimpses into all the different time periods of his life: moving to Hudson, Ohio as a young boy, his own life as a husband and father, business failures, the infamous raid at Harpers Ferry and finally his hanging as a traitor in 1859.

The Passion of John Brown by the Akron Symphony Orchestra
October 17, 8 pm
The Akron Symphony will perform a new work, commissioned for the Akron sesquicentennial commemoration, “The Passion of John Brown,” by Malone College professor Jesse Ayers, in a concert remembering the heroic works of historic figures. The concert will be held at E.J. Thomas Hall.

150th Anniversary of John Brown’s Execution
December 2
To commemorate the day of the execution of John Brown, on December 2, 2009, the City of Akron and Summit County Historical Society will hold a memorial event in collaboration with the First Presbyterian Church on East Market Street in Akron.

I was unable to find an email address for this blog so I am leaving my message as a comment. I am the owner of http://heroesofabolition.blogspot.com/ . The blog contains contains a short book about John Henry Kagy. The book documents the history of the Meyhew Cabin in Nebraska. See http://www.mayhewcabin.org/. Please consider adding links to both of the URLs in this comment. Thanks. P. S. Sadly, slavery is still alive and well. See http://www.antislaveryinternational.org for current updates on slavery.