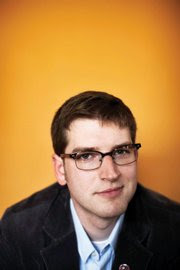 More About Illustrator/Writer John Hendrix and His New Book, John Brown: His Fight for Freedom
Source: Terry Rombeck, "Story for All Ages: KU Alumnus Writes Book on John Brown," The Journal-World & News [Lawrence, Kan.], Sept. 1, 2009
This might be the only illustrated children’s book that has the hero hanged at the end. But, true to history, that’s how it goes in John Brown: His Fight for Freedom, a 40-page book full of colorful drawings that is released today. It’s the project of John Hendrix, a Kansas University graduate now living in St. Louis.
“Part of the desire of mine is to revitalize his reputation in some ways,” Hendrix says. “I have a point of view about him. If I gloss over the stuff that’s controversial or icky, this could be easily dismissed as propaganda. That’s not helpful in telling the history.”
It’s a story that’s been told many times about the abolitionist, who is viewed as anything from a civil rights hero to the father of modern terrorism. But it’s probably never been told quite like this, with double-page illustrations and words that Hendrix figures are appropriate for a fifth-grade audience. “By then, they’re learning what slavery was,” the author says. “I see it as a supplement to a history class.”
Hendrix lived in Lawrence from 1994 to 1999, earning two degrees from KU. It was during his time here that he worked on his first John Brown project, a brochure on the history of northeastern Kansas for the Lawrence Chamber of Commerce. When he moved to New York a few years later, he met a pastor who had written a book about Brown. Several colleagues encouraged him to pursue a children’s book on the abolitionist using his illustration skills, which he has used for publications such as Rolling Stone, Sports Illustrated, Esquire and The New York Times.
“Honestly, I thought that was a crazy idea,” he says.
Eventually, Scholastic Press signed on. He worked several years with that publisher until it eventually decided the subject matter might not be a good fit. That’s when he found Abrams Books, which agreed to pursue the project.
All of the major moments in Brown’s life are represented in the book, including the killing of five pro-slavery settlers on Pottawatomie Creek by Brown and his sons and the fact that the first man killed during the raid at Harpers Ferry — where Brown was attempting to take over an armory — was a free black man named Shephard Hayward.
The book also ends the same way Brown’s life ended: with his hanging for the Harpers Ferry attack. But Hendrix says he did try to keep the violence in check, limiting the number of guns and battle scenes in the book. The biggest challenge, he says, was to depict Brown as someone who was “both sane and fiery and compassionate” — especially considering many people identify his image first and foremost with the John Steuart Curry mural that hangs in the state Capitol in Topeka.
“The eyes very much came into play,” Hendrix says. “His face was very stoic. Moses meets Superman is kind of our pose. I wanted him to have grandfatherly wisdom on top of strength and size.”
And for as important as the drawings are, he wanted to make sure the history was as accurate as a textbook. “It’s listed as a nonfiction book,” he says. “We had to be rigorous with our facts. We really didn’t want this to fall into historical fiction.”
The facts pass the test, as far as Jonathan Earle is concerned. Earle is an associate professor of history at KU who studied the Civil War and who himself has authored a book on Brown. He admits he was skeptical when he first heard of Hendrix’s book. But after reading it, he says it works. “He cites the important works, takes John Brown’s religion and gets into how his thinking was far out of the mainstream,” Earle says. “He makes that a central part of the book.”
And he was surprised at how directly the book dealt with the controversial periods of Brown’s life. “There’s difficult stuff,” Earle says. “He doesn’t avoid the difficult parts of the biography, such as John Brown and his sons murdering the settlers in Pottawatomie. He doesn’t airbrush him.”
Hendrix sees Brown more of a civil rights leader than a terrorist. He’d like to share that view with a new generation of historians — starting them out in elementary school. “I think he was much more akin to Martin Luther King than John Dillinger,” Hendrix says.
------
Also see an excellent blogger review by clicking here--LD
Posted by Louis A. DeCaro, Jr. . . at 12:36 PM

Looking forward to getting this book at Harpers Ferry next month. –Greg Artzner

This book is outstanding.