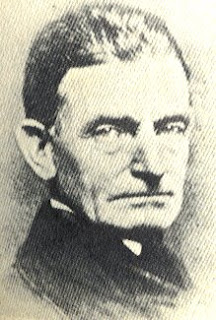 Notes on John Brown's Names of War
Students of John Brown's public career as a freedom fighter are well aware that he employed the use of pseudonyms in both the Kansas and Harper's Ferry episodes. Indeed, Brown's use of the nom de guerre is legendary. Yet biographers and students of Brown's life seem never to have bothered to inquire into the origin of these names, the assumption being that they were all simply "made up" names with no significance otherwise. To the contrary, because John Brown chose them, they reflect some aspect of his life, and may even unlock aspects of character that are meaningful to the biographer.
This is certainly the case of the his rarely used pseudonym, "James Smith," which appears in two of Brown's letters written on June 3, 1857. Brown was known to have said in his family that he liked having a common name and would even have preferred the more common name of "Smith." Perhaps this is why he used the pseudonym "James Smith" in writing to his Kansas associates, Augustus Wattles and William Addison Phillips, the chronicler of the Kansas struggles and the author of an important reminiscence of John Brown. In my study of Brown's letters, I have not found his usage of "James Smith" repeated thereafter, probably because he decided upon an even better nom de guerre, Nelson Hawkins.
Before proceeding, it should be noted that Brown was not the only one who employed the use of pseudonyms on the Kansas scene. In fact, his "James Smith" letter to Phillips is actually addressed to William "Adison," Brown's misspelling of the writer's middle name. Evidently both men felt it necessary to employ false names to evade the watchful eyes of pro-slavery interests in Kansas. In one of Brown's memorandum books (held in the Boston Public Library collection), he notes also having written to "W.B. Edmonds" on August 4, 1857, and just above it wrote three initials, "EBW." As it turns out, "W.B. Edmonds" was the pseudonym for E. B. Whitman, the general agent of the National Kansas Committee. So Brown hardly invented the idea of using pseudonyms in Kansas.
I have mentioned that Brown did not apparently continue to use the "James Smith" pseudonym, although most students of his story will recognized that he later appropriated the "Smith" name for the Harper's Ferry venture. I will return to that name below. In 1857, however, Brown found a new name that he used frequently in communicating with family and associates, the legendary pseudonym, "Nelson Hawkins."
While I have generally found that most of my "discoveries" have already been noted by the late great Boyd B. Stutler, I'm humbly sure that the source of Brown's "Nelson Hawkins" pseudonym seems even to have evaded Stutler (and every other scholar). I was fortunate enough to come upon a lead when examining a letter from John Brown Jr. written to his sister, Ruth Brown Thompson on February 23, 1851, now held in the Gilder Lehrman Collection, currently residing at the New York Historical Society. In that interesting letter, John Junior describes a warm evening at home with family and friends, including one Nelson Hawkins, who happened to be playing chess with his brother Jason Brown. It seems, Junior explains in the letter, that Nelson Hawkins was hanging around the Brown household because he liked Jason's sister-in-law. This passing reference to Jason's chess mate opened up a world of interest to me. Who was this Nelson Hawkins since Junior obviously was not referring to his own father? Happily, Nelson appeared in the 1850 census for Summit County, Ohio. From the census we surmise that he would have been in his late 20s at the time that Brown began to use his name in Kansas, and that he was a carpenter by profession. Since John Brown had moved his family back to Akron, Ohio in 1851 (where they remained for four years before returning to the Adirondacks), we can assume that he was well acquainted with the real Nelson Hawkins. (It would be interesting to learn if Nelson eventually married Jason's sister-in-law, but I never checked.) As I've pointed out in my book, John Brown--The Cost of Freedom, Brown's appropriation of Nelson Hawkins' name is strongly suggestive of Brown's sense of humor. Most of the letters in which Brown signed off as "Nelson Hawkins" actually are written to his family. While Franklin B. Sanborn received at least one "Nelson Hawkins" letter from Brown, he would not have known the significance of the name. But wife Mary Brown, namesake John Jr., and others in the family probably were amused. (Nelson Hawkins is listed in the cut-out of the census below, on the third line, from the 1850 Census, Portage, District 14o, Summit County, Ohio, Oct. 15, 1850, p. 433.)

Perhaps more interesting is another discovery of mine, also featured in John Brown--The Cost of Freedom) concerning Brown's most famous nom de guerre, "Isaac Smith," the name that he carried with him to Harper's Ferry in 1859. Like "Nelson Hawkins," it is more likely that this "Smith" name was appropriated from an actual person and was not simply a variation of his beloved "common name" theme.
Reading through microfilm of the Springfield [Mass.] Republican some years back, I began to see that a frequent advertiser in that paper was an umbrella manufacturer named Isaac Smith. Considering that Brown lived in Springfield from 1846-49, it is unlikely that Brown would have missed the advertisements of "Isaac Smith & Co." Even after his residence in Springfield ended (April 1849), Brown later visited Springfield when raising funds for his anti-slavery efforts in the later 1850s. Furthermore, the Smith company had its corporate office in New York City and a branch office in Boston, so it is also possible that Brown either became aware of the name or was reminded of it during subsequent trips east, especially his notable visits to Boston. All in all, there is a reasonably good basis for concluding that John Brown's Harper's Ferry pseudonym, "Isaac Smith & Sons" was an appropriation of "Isaac Smith & Co." of New York and Boston. With the possible exception of the real Isaac Smith, who would have suspected that the controversial abolitionist had hijacked the name of an umbrella manufacturer in his great anti-slavery plan? Certainly none of the John Brown scholars has made this connection thus far, and it seems the most reasonable one in my own estimation. 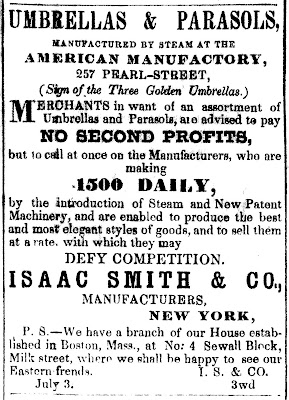 Although I have likely established the sources for Brown's pseudonyms "Nelson Hawkins" and "Isaac Smith," his third notable nom de guerre remains a mystery: "Shubel Morgan." "Shubel" is a Hebrew word, a biblical name which means "captive of God." (This is a proper name that is rendered in the Hebrew both as Shubael or Shebuel. See 1 Chronicles 25: 4, 20.) The name has great resonance when one considers that this was the name that Brown chose to employ when he and his men forcefully brought eleven people out of southern slavery and escorted them safely to Canadian freedom in early 1859.
Yet even this does not necessarily explain the source of the name. As we have already seen in two other cases, it is possible that "Shubel Morgan" was the name of someone that Brown had actually known or heard of in his life and travels. To be sure, no evidence has come to light showing that Brown knew or interacted with anyone named Shubel Morgan. Still, it is possible that the name, in whole or part, was appropriated by Brown and not simply contrived because of its biblical reference to captivity.
Consider the possibility that "Shubel Morgan" is actually a combination of two names. While this is sheer speculation, it is interesting to consider that Brown's famous pseudonym is a combination name based upon two religious leaders in North America, Morgan Edwards (b. 1722) and Shubal Stearns (b. 1706). Morgan Edwards emigrated from Wales to North America and founded the first Baptist college in the colonies, a school that later became Brown University in Rhode Island. (He and John Brown shared the same birthday of May 9.) Shubal Stearns was from a Boston Congregationalist home and became an advocate of the Great Awakening's separatist revivalism. Departing from the paedo-baptism of the Congregational church, Shubal Stearns himself became a renowned Baptist preacher of the "born again" message. While these men are obscure and forgotten in our time, it is possible that Brown had heard of them. Was his pseudonym, "Shubel Morgan" another example of John Brown's tendency to appropriate real names, or was it simply a clever concoction based upon his frequent Bible reading? We will never know, but perhaps John Brown students and scholars will continue to find the theme of his pseudonyms to be a point of interest in reflecting further on his life, personality, and traits as a religiously-motivated radical.--LD
Posted by Louis A. DeCaro, Jr. . . at 1:24 PM

Wow, that umbrella ad pick-up is amazing. I'm sure that had something to do with his name. Even the product of umbrellas is kind of a metaphor, yes?

Cloudsplitter mentions another name - Reuben Shiloh... Is this fiction or an actual alias?

Yes, this is fictional--"Reuben Shiloh" is an invention of Russell Banks. --LD

Very interesting! I often wondered about the alias of Shubel Morgan. My g. g. grandpa Simon L. Morgan was a farmer in Linn, Kansas during the time of John Brown's exploits in the area. Simon had moved from Missouri because of his anti-slavery sediments. He later volunteered with M Co.Kansas Cavalry Volunteers. My father resembled John Brown isnt that a hoot?