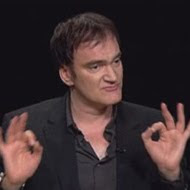 Quentin Tarantino: On Doing a John Brown Movie (Again)
An article in the New York Magazine (on line) posted on Aug. 26 notes the appearance of film maker Quentin Tarantino on The Charlie Rose Show on Aug. 21. Tarantino was naturally discussing his recent cinematic triumph, but as in a former interview [April 18, 2007] by Rose, the subject of making a John Brown movie came up again.
Tarantino: . . . there is one story that I could be interested in doing, and probably it would be one of the last movies I'd do--ah, my favorite hero in America, is John Brown.
Rose: Of course.
Tarantino: John Brown is my favorite American who ever lived.
Rose: And why is that. . .because of what he did?
Tarantino: Yeah, you know. He basically, you know, he basically, single-handedly, started the road to end slavery, and the fact that he killed people to do it, you know, he decided, "OK, we start spilling white blood, then they're going to start getting the idea."
The film maker went on to note that Brown has not been portrayed in too many movies, and he alluded to Raymond Massey's portrayal of Brown in the fundamentally negative and hostile (Southern) cinematic interpretation, Santa Fe Trail [1940]. Actually, Massey portrayed Brown again in the slightly more sympathetic Seven Angry Men [1955], but the latter was not influential, and certainly failed to challenge the negative cultural impact of Santa Fe Trail.
As John Brown bio-pics go, Tarantino says that he does not want to make a "solemn" bio-pic. That is, he doesn't want to try to portray a life story, but would rather do an epic moment or episode. For instance, he would portray Brown's role as a guerilla fighter, making raids on pro-slavery men. His production would be biographical in that it would be "true," but he would not make a "musty" life-to-death story about Brown because he feels those kinds of movies are "showcases for actors but not really showcases for story-tellers or directors."
Unfortunately, Tarantino reiterated the idea that this project is something he will do later in life, perhaps toward the end of his career. We would like to remind Mr. Tarantino that, notwithstanding our hopes that he has a long and fruitful career, tomorrow is not promised. Indeed, the time is ripe for him to begin working on a John Brown movie before someone else who despises Brown or who thinks he was a prairie psycho makes the ground-breaking movie.
Biographers and historians obviously have a different set of expectations of a bio-pic than film makers, and my own record suggests concern that Tarantino might reduce Brown's life to a blood-fest. After some consideration, I would like to think that Quentin Tarantino would take a higher road to telling John Brown's story because, unlike many historians, he seems to "get" John Brown--notwithstanding the fact that his descriptions of Brown are idealistic and simplistic. Certainly it is unfair to a great cloud of witnesses to say that Brown started the road that led to the end of slavery. For instance, Brown was deeply moved and educated by black revolts in the U.S. (Denmark Vesey, Nat Turner) and Haiti (Toussaint L'Overture). My fellow Brown biographer David Reynolds makes this case to be sure, but he is careful to make the necessary qualifications of a historian in pointing out how Brown can be said to have been on the vanguard in ending slavery. Likewise, to reduce Brown's contribution to killing white people also begs for qualification and explanation. In fact, Brown failed at Harper's Ferry precisely because he was trying to avoid the killing of whites--he knew how easily his effort could slide from a self-defense liberation effort to a full-scale insurrection and bloodletting. His error at Harper's Ferry was overcompensating in favor of protecting the moral and ethical quality of his raid, and ended up forcing him and his surviving raiders to sacrifice their own lives instead of conducting what could easily have been a successful terrorist campaign. But Brown was not a terrorist and I hope that when Quentin Tarantino makes his John Brown movie (next year!), he will be careful to make that point clear toward the re-education of many ill-informed viewers.
Mr. Tarantino is urged to take this project on now, in the sesquicentennial year of John Brown's raid and hanging by the State of Virginia.
Posted by Louis A. DeCaro, Jr. . . at 1:37 PM

I tremble at the prospect of Tarantino's treatment of the story of our man Brown. His track record would rather predict a bloodbath onscreen, and then the "terrorist" label would be intact, Brown's image yet again done dis-service by Hollywood. I suppose Mr. T could surprise us all and make a very good, historically true artistic work, but it would be a surprise. There are other filmmakers: producers, writers, directors, actors who could a fine and credible job. I am holding out for them. If it's "next year" I'd much rather it not be Mr. QT. -Greg Artzner

Here is a link to our new video at YouTube. They keep cutting out my second comment installment where I mention the new geneology research, explaining that since we recorded the song newly clarified information has emerged through the work of Brenda Copeland Pitts showing how Lewis Sheridan Leary, for 150 years generally thought to be John A. Copeland's "uncle" was, in fact, the brother of two sisters who married John's two uncles, making the two sisters Copeland's aunts by marriage, and Lewis Leary no "kin" at all!"
http://www.youtube.com/watch?v=zCV2_63M08g

If the idea of Mr.Tarantino doing a movie about John Brown's anti-slavery exploit makes on tremble so let that be the case. I can only assume that this trembling is in part due to the graphic nature of Mr.Tarantino movies. So what do we say, because of this undeniable truth of the nature of his movies it will validate what has been defined as terrorism.

Because so few americans really no the truth about the evolution of race relations, (black v. white) it will serve up as a very good dish for american society.

According to what has been written about John Brown it has the making of a very good silver screen project. Mr.Tarantino is not concerned about John Brown's life just certain events probably pre Harper's Ferry raid.

The irony is that John Brown actively placed himself in harms way and paid the price of doing so with his life.....(for the cause of others, universal law or in layman's term human rights, hell even the constitution was anti-slavery unless the framers goofed writing the (all men) clause.

Abe lincoln on the other hand ends up getting all the glory, I guess because he put himself in harms way as well or did he. One thing that is a truth, Abe was terminated but why............Did he not make it clear to his party affiliates that he/they were not even remotely connected to John Brown. I guess in the eyes of those who are pro-slavery, the best way to deal with anti-slavery is termination. Let's face it a white man killing other whites for african anti-slavery cause even confused ole Abe. But thanks to Mr. Brown he polarized the 2 political parties and forced this nation to live up to it's creed. The big difference between Abe and John one was willing to die and documented as such and the other died because of fear of things to come..........failure to establish a new government or an additional government, (the confederacy), in a sense overthrowing the constitution............a true act of collective treason. As the April 2012 edition of Time Magazine states.......(why) america is still fighting the Civil War 150 years later.

This will be an excellent project for Mr.Tarantino and let other directors/producers embark as well. Can you imagine being a terrorist defending the rights of other humans in america and having a supporting document........... principles of the US Constitution.