"The War of Races"? Patrick Breen Gets John Brown All Wrong

The December 27 issue of The Washington Post featured an interesting article entitled by Michael E. Miller entitled, "'The War of Races': How a Hateful Ideology Echoes Through American History."  Miller discusses the idea of race war, which has tended to resurface throughout U.S. history.  Quoting Ibram X Kendi, a professor at American University, the idea of race war surfaces “during moments of intense activism against white racism.”  Miller points to parallels in history, such as between the Reconstruction period and the more recent Black Lives Matter movement.  As Kendi concludes, by portraying themselves as the victims, “defenders of white racism have been able to galvanize large numbers of white people into their organizations.”

While Miller's point is certainly valid in historical terms, his article takes an unfortunate and problematic turn--apparently because he depends upon Patrick H. Breen, Associate Professor of History at Providence College in Rhode Island.  Breen misdirects Miller to John Brown the abolitionist, forcing him to fit--against the shape of history itself--into this unfortunate theme of race war.  "The idea [of race war] flared up again in the lead up to the Civil War," Miller writes, "as John Brown launched abolitionist raids in Kansas and then Virginia."  Apparently, however, Miller is entirely dependent upon Breen in drawing this problematic conclusion.

Breen is the author of The Land Shall Be Deluged in Blood: A New History of the Nat Turner Revolt (Oxford, 2015), which is the most updated and thorough treatment of this epic slave revolt to my knowledge.  I reviewed The Land Shall Be Deluged in Blood for the American Historical Review (June 2017, pp. 837-38) and concluded that "no scholar has so deepened the research or so sagaciously and meticulously examined the available sources" on the Turner episode as we find in Breen's work.  On his school's website, Breen expresses hope that his book "will be considered the authoritative account of America's most famous revolt," and observes that a number of notable publications have already recognized him as "the authority on the revolt."  He certainly is to be saluted for his accomplishment.  I am not a Turner scholar although I've read the standard works, and I think that Breen did a thorough job in consideration of the evidence as well as the historiography.

My only objection to his work, however, was his somewhat strange conclusion that various black responses to Turner reflected W.E.B. DuBois's model of "double consciousness," and that some enslaved people felt ambiguity toward slavery based on their mixed response (pp. 166-67).  I am dissatisfied with this conclusion, and believe that the only ambiguity might be felt by free blacks living in the South, given they were privileged.  That some enslaved people did not respond willingly to Turner when given, as it were, a moment's notice, had more to do with their own sense of certainty, apprehension, and fear.  But to suggest that enslaved people really had mixed feelings about being enslaved people strikes me as grossly incorrect and probably offensive.

Does Breen's inclination to think of enslaved black people as feeling ambiguous toward their bondage hint at a questionable view of race in historical terms?  Certainly, Breen's assertion that Brown be classified as a white "race war" instigator is ridiculous--especially because Miller's article is about how white racists have used race war as an ideological means.  What does Breen's insistence in this regard suggest about his own views of race and racial conflict?

It is Breen, not Miller, who thus declares: “John Brown is basically saying, ‘We can launch a race war.'" Was John Brown "basically" suggesting race-war to black people?  Of course not. (I have already written to Mr. Miller, at the Washington Post, calling his attention to this gross distortion of the historical record.) Verily, Breen may be an expert on Turner, but he is no John Brown scholar, and it really does seem that he has something against him.

Clearly, Breen buys into the conventional narrative of John Brown.  One evidence of this is that he feeds the notion that Brown's "race war" had "little appeal to African Americans."  But he is wrong on two counts.  First, Brown never peddled or presented "race war" to blacks; second, while his efforts had little appeal to free blacks in the North, Brown and his men, including Osborne Anderson (who wrote a narrative of the raid) found that enslaved people in Virginia greeted him with enthusiasm.  Of course, Breen disbelieves this, although, again, I would stress, his cynicism toward Brown is probably based more on bias than evidence, or else he would not make such a baseless assertion.

“Race war is an idea that emerges at certain points in American history and fades at others,” Breen says further in Miller's article.  “What has made it such a powerful idea, however, is not some real danger of a race war itself, but the politically useful nature of these charges. Politicians have used racially inflammatory rhetoric like this to help them attain power, whether by mobilizing one’s base or suppressing their opponents, but long after the last ballots have been counted, the legacy of the racial demagoguery remains.”  Certainly, Breen has a point. But inserting Brown into this theme is just, well, wrong.

Certainly, Breen has a point.  But inserting Brown into this theme is just, well, wrong. 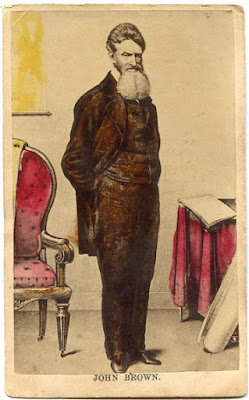 If Breen would like to present himself as the go-to guy on Nat Turner, then I will at least suggest that I am among the most familiar with Brown in contemporary scholarship.  I have studied the abolitionist for more than twenty years, collected his letters, and published a number of biographical efforts.  My forthcoming book on Shields Green (NYU Press, 2020) further explores Brown's ideas about fighting slavery, particularly his Declaration of Liberty (1859), where Brown writes, as it were, on behalf of enslaved black people.  No where have I ever found even the slightest inclination on John Brown's part to invoke "race war," not even for the sake of black liberation.  In fact, Brown was far more sympathetic toward white southerners than many realize, believing that many of them were simply unfortunate products of an oppressive slaveholding society.  He was not hell-bent on killing whites and his conduct--and his failures at Harper's Ferry too--show that he was no insurrectionist.  If Brown wanted a "race war" in Virginia, he could have easily accomplished it.  So why does Breen inject Brown into Miller's piece, except that he has some bias against him?

John Brown raison d'être was the defeat and destruction of slavery, not whipping up a race war.  If he had had his way, blacks and whites together would have labored throughout the south to liberate the oppressed. As he said as a prisoner in Virginia, he made no plans for insurrection--race war--and wanted to undermine slavery with a minimum of bloodshed.  He never expressed this goal in terms of race war or the destruction of whites, and for Breen to suggest otherwise is nonsense.  Along with this, his thesis that enslaved blacks had ambiguous feelings about slavery should also cause a red flag to go up.

Breen is not only wrong in the letter of John Brown's story, but apparently he is also wrong in the spirit of his story as well.  Readers should mark his work accordingly.--LD