The year 2020 promises to be notable for films about John Brown--and Shields Green, a.k.a. Emperor, one of the unsung Harper's Ferry raiders.  As published here, in 2018, it was announced that Sobini Films had undertaken the story of Shields Green for the feature film, "Emperor"(also see my article, "Out of the Blue: "Emperor," a Shields Green/John Brown in Production Now! July 13, 2018). A year ago (see "Shields Green: The Movie That Made It and the Movie That Didn't," Jan. 3, 2019), I followed up this news with a piece about the new film "Emperor" that features Dayo Okeniyi as Shields Green and James Cromwell as John Brown.  Initial reports said the film would be released in November 2019, but the film's release was delayed, perhaps so it would not conflict with the release of the Harriet Tubman movie.

This month (Jan. 15), DEADLINE announced that "Emperor" had been picked up by Briarcliff Entertainment and had a new release date for March 27, 2020.  While "Emperor" promises to be an entertaining and positive with respect to John Brown's legacy, the screenplay will likely rely more on the writers' imaginations than upon the record, since there is scant information about this Harper's Ferry raider. 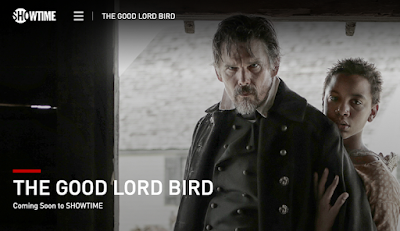 Meanwhile, we are anticipating the SHOWTIME series based upon James McBride's novel, The Good Lord Bird, which tells the story of a young black man who follows John Brown from Kansas to Virginia.  Readers of this blog know that I'm no fan of The Good Lord Bird, nor am I particularly trusting of any fictional accounts of Brown's story (with the possible exception of Terry Bisson's Fire on the Mountain and, more recently, Robert Wells' Passing Through to the Territory).  However, some estimable friends have offered the consolation that McBride at least has done the Old Man no harm.  At any rate, it is worth mentioning that McBride's story includes a fictional version of other characters in the John Brown story, including Shields Green.  Of course, in the SHOWTIME television series, Brown is played by Ethan Hawke (preview images of him as Brown are unpersuasive), and Emperor is played by Quentin Plair.  One report states the SHOWTIME "Good Lord Bird" series will be broadcast in February, but I'm told that there is not yet a definite date for its premiere despite the report.

Of course, with cinematic portrayals, it's always "wait and see" as far as the biographer is concerned.  It is arguably good for the study of John Brown when novelists and screenplay writers take on his story--if they are not fundamentally dedicated to denigrating him, as was the case with Bruce Olds back in the late 20th century.

I should update my readers on my own Shields Green project.  I have just returned an edited draft to the publisher with my own corrections and minor changes, and hope to have galleys in my hands by the end of February or early March.  Unfortunately, the book will not be out until the fall of 2020, much to my disappointment.  I really had hoped for a spring 2020 release, but in the words of Old Brown, I see now that I had only "vainly flattered myself."

Stay tuned.  Old Brown and Emperor are coming your way on the big screen and television this spring, and last but not least, my book, The Untold Story of Shields Green: The Life and Death of a Harper's Ferry Raider, later this year.--LD

John Brown will also be featured in "American Prophet", a world premier musical about Frederick Douglass, which debuts at Arena Stage in Washington, DC from July-August 2020: https://www.arenastage.org/tickets/american-prophet/

FYI, I was an actor in February workshop of "American Prophet" and was newly moved by Mr. Brown's vision (composer/songwriter Marcus Hammon has given him a great song, too.).