Rich Smyth's Where Are They Now? RICHARD REALF

Every month John Brown the Abolitionist Blog will be featuring an installment of Rich Smyth's "Where Are They Now?"  Thanks go to Rich for sharing from his extensive quest and study of the final resting places of John Brown's associates and contemporaries.--LD
---------------------

Richard Realf was a poet journalist and correspondent for several eastern newspapers who helped plan the raid on Harper's Ferry. His life consisted of adventure, vagrancy, idealism and romance. An Abolitionist, above all he was a romantic. Realf: June 14th 1832 - Oct. 28th 1878.
Some of John Brown’s contemporaries and even today’s historians label Realf a traitor to the Abolitionist cause. After Brown’s execution Realf was arrested and testified before the Senate Committee Investigating the Attack at Harper's Ferry, which resulted in what would become known as the Mason Report. Realf named names and in a private letter was critical of Brown.1
Growing up in England as a young child protégée in poetry, he was introduced into upper class English society. In 1853 Lady Byron, wife of George Gordon (Lord) Byron assisted Richard in obtaining training in estate management by having him apprentice on one of her land holdings in Leichestershire.2
Lady Byron’s nephew was the current steward of the property and Richard lived with the family.  Caroline Noel a young blue-eyed, blond had come to live with her uncle, the current steward, after both her parents succumbed to diphtheria.3
Soon, Richard (21 years old) and Caroline (14 years old) were meeting in the library at night. They held hands, kissed and exchanged locks of hair, his dark, hers – honey blond.4
One day on the way back from a local fair, the two stopped in the forest and it was from that encounter that Caroline became pregnant.5
Regardless of protests that he loved her and wished to marry her, he was forced to leave the estate and not return.
Though he would never forget his first love, he left Europe dejectedly, for the United States.
Arriving in New York, he worked as a missionary in a lower Manhattan Bowery slum before joining a party of free-state emigrants to Kansas, where he became a journalist and correspondent for several eastern newspapers.
It was in Kansas that Richard met John Brown accompanying him to Canada where he was to be secretary of state in Brown’s provisional government.
When John Brown launched his raid on Harpers Ferry in October, 1859, Realf was in Texas.  He was arrested as an accomplice and sent to Washington, D.C., where he testified before the committee investigating the raid.
During the Civil War (1862) he enlisted in the 88th Illinois Volunteer Infantry Regiment. On June 10th 1865 he married Sophia Emily Graves whom he met in Indiana. While he was away they communicated frequently and appeared to be very much in love. But, during the course of his travels, he met a belle of Washington society and was smitten. When the war ended, he moved to the capitol where he was also commissioned in a colored regiment until mustering out in 1866. He never saw Sophia again. 6
Sophia died in October 1882 at the age of 52 in Merriville, Indiana. 7

On October 26th 1867 he married Catherin (or Catherine) Cassidy of Rochester, New York. Realf later claimed to have been intoxicated during the ceremony to Catherin. This marriage was a nightmare for Realf and he filed for divorce. One writer, who did not have nice things to say about the wife, classified Catherin as a prostitute. 8
In 1868 he established a school for freedmen in South Carolina.

His third marriage (between 1871-1875) was a common law marriage to Elizabeth "Lizzie" Whappen (AKA Eliza Wapham “1846-1926”) who bore him four children. Only later did he learn that his divorce from Catherin did not go through and he was still legally married to her. A bit crazed and knowing Catherin would cause him and his family trouble, he fled to San Francisco and rented a room with a family named Meade on Mission Street while working at the U.S. mint. He hoped to bring Lizzie and the children west and escape the reaches of his second wife. 9

It is interesting to note that a few years after Richard’s death both Sarah Brown (daughter of John Brown) and her mother Mary obtained positions at the same mint.10
One night upon returning to his room, he found Catherin Cassidy there. He immediately fled finding accommodations at the Winsor House in Oakland, California. He spent his last money for a bottle of laudanum and drank it in his room. Waiting for the poison to have its effect, he wrote a final poem on scraps of paper. The last lines (see below) were blurred by the poison which had numbed his hand.
And all His arching skies were in eclipse.
He was a-weary, but he fought his fight
And stood for simple manhood; and was joyed
To see the august broadening of the light.
And new earths heaving heav'nward from the void.
He loved his fellows, and their love was sweet—
Plant daisies at his head and at his feet.

The poison worked as intended and Realf died on October 28th 1878. Along with the poem was a letter to his friend Richard Josiah Hinton (Abolitionist and John Brown biographer) in which he issued the following request concerning Catherin Cassidy: "On no account is the person calling herself my wife to be permitted to approach my remains. I should quiver with horror, even in my death, at her touch………I have had heavy burdens to bear, such as have sent stronger men than I reeling into hell. I have tried to bear them like a man, but can endure no more."
He also wrote out his last will and testament:

“I, Richard Realf, poet, orator, journalist, workman, do hereby declare that I have deliberately accepted suicide as the only final relief from the incessant persecutions of my divorced wife… My poems and the MS of certain lectures to be found scattered promiscuously in my room, on the table, and in my trunk, are to be put in the possession of Gen. John F. Miller, who at his discretion will, or will not, surrender them to Col. R.J. Hinton, of the Post… But…she…who once bore my name, and who is now in San Francisco, must on no account be informed of the residence of my wife, who would be in constant danger…Now, God bless all. God pardon me as I pardon all. I love Gen. John F. Miller, Col. Tappan, Col. Hinton, Mr. Mariner Kent, John Finigan, E. Levy, Col. J.J. Lyon, and many others.

“there is, or should be, a tied lock of hair in the form of a rude bracelet, lying on the bathroom window sill of my boarding house. I should be glad to have it placed around my wrist.

The bracelet of blond hair, now a quarter of a century old was the gift of Richard’s first true love.  He had kept the relic through all his travels, his turmoil’s and other loves. To be buried with Caroline’s hair was his last request. The bracelet was placed with Realf in his grave.  Realf was originally buried in Grand Army of the Republic Cemetery plot 100F.
He was reinterred in San Francisco National Cemetery on January 31, 1933, section OSA, row 72, grave #4, located in the Presidio of San Francisco, California. 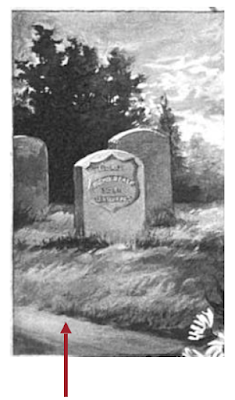 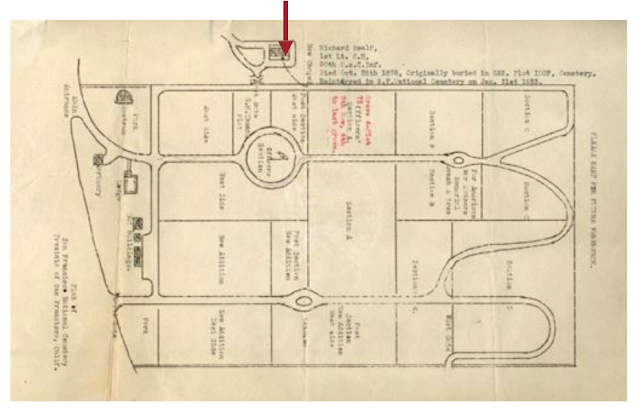 Realf’s standard marble military marker indicates he was a lieutenant in the U.S. Colored Infantry.
The address of the cemetery is 1 Lincoln Boulevard, Presidio of San Francisco. The cemetery is located in the northern section of San Francisco. From San Francisco International Airport, take Hwy. 101 North to San Bruno/Hwy. 380 exit to Highway. 280 North. Take 19th Ave., exit (approximately 50 yards from the Golden Gate Toll Plaza). Yield right to Lincoln Blvd. Turn left onto Lincoln Blvd. and continue to the corner of Lincoln and Sheridan Blvd’s.
* The author has included information obtained from: Helen Delay, "Richard Realf, Poet and Soldier," The Home Monthly (8 May 1899), pp. 10-11.

1 James Redpath in his preface to his John Brown autobiography labeled Richard Realf a Judas.


6 Sophia received letters from Richard including the last one on February 24th 1866 saying he was on his way home after the war and mustering out. She never heard from or saw him again. In the 1880 census she was living with her younger sister Louisa Maria Graves and her husband Edwin Leigh Furness in Furnessville, Indiana. Sophia was 50 years old and teaching school.