Geoff Edgers of the Washington Post has an exciting piece currently accessible on TuftsNow, the website of Tuft's University, called "Finding John Brown: Solving the Mystery of a Lost Masterpiece in the Tufts Art Collection."   The article describes how Laura McDonald, the Collection Registrar at Tufts, made careful investigation into the famous but misplaced bust sculpture of Brown made by Edwin Brackett while the abolitionist was in jail awaiting his death sentence in November 1859.  I have written about this episode in Freedom's Dawn, but this article presents excellent background both historically, as well as regarding the fate of the bust and its recent recovery.   McDonald became curious about the bust when she read old correspondence discussing a bust with a broken nose; when she located the Brown bust, its nose was indeed broken.  Thanks to contemporary technology, a precise repair of the nose has been made.  Edgers writes that the bust was actually taken to Haiti, where it was displayed in a state funeral in Port Au Prince in 1860.

The bust was the brainchild of Brackett but was financed by George L. Stearns of Medford, Mass., who was perhaps the most crucial of Brown's wealthy supporters, since it was through him that Brown eventually came to possess Sharps rifles originally purchased for Kansas free state settlers. According to Brackett, when he first conceived of the idea to do a bust of Brown, his idea received a cold shoulder from Wendell Phillips, whereas the Stearns were quite willing to pay his way to Virginia and make Brackett's work possible.  Interestingly, as Edgers reveals, Mary Stearns eventually had a plaster copy of the bust made for Phillips at the time of the Emancipation Proclamation.

Edgers says that the original bust was displayed for a couple of years at the Stearns' residence, the Evergreens, and also shared with the Boston Atheneum, but received its formal unveiling on New Year's Day in 1863, to celebrate the Emancipation Proclamation.


Edger writes of that scene:

"There were readings by Ralph Waldo Emerson and Julia Ward Howe, the poet best known for writing 'The Battle Hymn of the Republic,' and then Phillips lifted a blue cloth decorated with silver stars, revealing the sculpture.


The work was met with wide acclaim. Harriet Tubman admired it, as did the abolitionist and women’s rights activist Lydia Maria Child. “In this bust of Brown, the character of the man looks through the features wonderfully,” Child wrote. “Any good judge, that might examine it without knowing whom it was intended to portray, would say, ‘That is a man of strong will and lofty courage; kindly of heart, and religious to the very core of his being.’”

After her husband died, Mary Stearns commissioned a bust of her husband in 1879. Stearns continued to support the struggle for justice and during the Civil War, he supported recruitment for the famous Massachusetts Fifty-Fourth Volunteer Infantry Regiment—the first all-black regiment in the U.S. army.   The busts of Stearns and Brown, along with the Stearns estate, were left to Tufts, and the busts were displayed in the school's old Eaton Library before they disappeared into its holdings.

After McDonald recovered the Brown bust, she also learned that the Boston Atheneum held a plaster copy, perhaps the one given to Wendell Phillips.  Based upon the plaster copy, a plastic nose and eyebrow were printed on a high-resolution 3D printer, and these were used to produce plastic replicas to repair the bust.    However, Laura McDonald is still hoping and looking that the original nose can be found and replaced on the bust.   In the meantime, both the bust of Brown and Stearns are on display at the Tufts Art Gallery until December 4, after which they will be permanently displayed at the Tisch Library.


This is a great find for history, perhaps since many of us simply assumed that the bust at the Boston Atheneum was the original Brackett production.  The community of scholars and supporters of John Brown owe Laura McDonald our thanks for her hard work and commitment to the restoration of this historical treasure and important image of John Brown.  In his own way, Brown has also made an impact on McDonald.  She told Edger:  “I guess I get wrapped up in the emotional intrigue of whatever the piece is”—but there was something particularly rewarding about this project. “John Brown,” she said, “is my new boyfriend.”+ 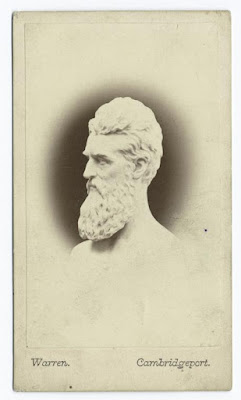 I have included here a photo of the Brackett bust credited to a photographer named Warren, featured in a publication entitled The Pageant of America, Vol. 8.  Apparently the photograph was made by permission of Mary Stearns, who still held the bust at the time (Dec. 1882). 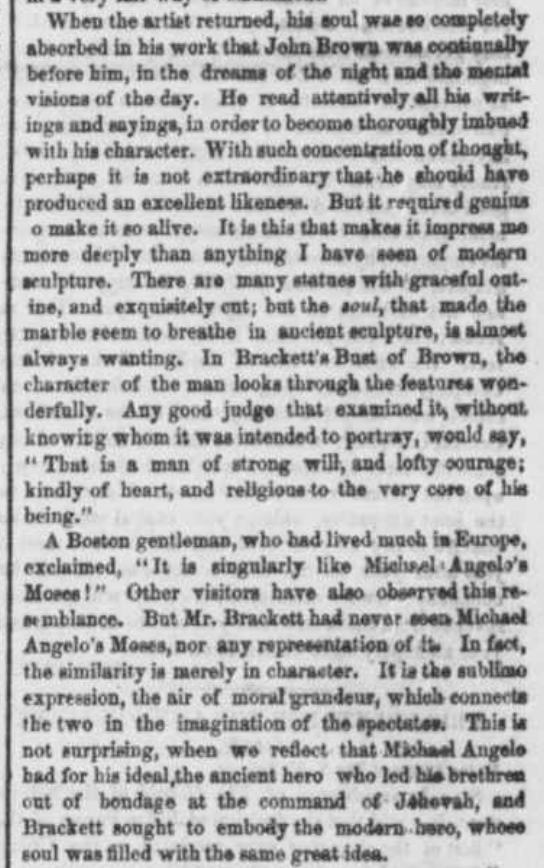