From the Field:
A NUMISMATIC JOHN BROWN EASES THE SECTIONAL CRISIS 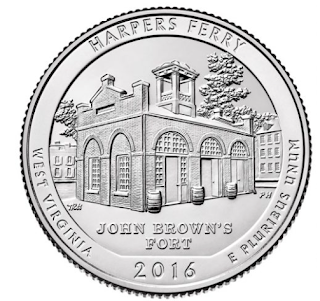 My best buddy from below the Mason and Dixon Line recently paid me a welcome visit. I always relish the opportunity to converse with him upon topics historical, for our respective chromosomes contain a recessive gene which allows us to discuss 19th century characters and events that would compel a normal person to assume a slack-jawed expression of boredom, wonderment, or perhaps even alarm.
This friend is a native of the Sucker State of Illinois, but long residence within the confines of what I call the Virginia Whine Country has allowed him to absorb a healthy dose of the Lost Cause theology. He is steeped in legends of “The Gray Ghost,” the Confederate partisan John Singleton Mosby…who still rides amidst the swirling vapors of his imagination.
So the expected soon transpired. We had just settled upon the couch…an ice cold Gandy Dancer (an admirable malted nectar from Potosi, Wisconsin) in hand…when my comrade introduced the subject of the “terrorist” John Brown. I was gently chided for “wasting my considerable talents” in researching and writing upon such a questionable topic. For as everyone knows, he declared, the Old Man was certainly responsible for a wealth of our national maladies and disasters.

And the litany thus began:
“You know that Brown’s legacy created the Johnstown Flood.”
“Now that’s ridiculous, he was not even….”

“And disciples of Brown were responsible for the sinkings of both the Titanic and the Lusitania.”
“That’s absurd, those events occurred…”

“Irrelevant,” he shouted…and he continued:

“You don’t deny that John Brown was the brother-in-law of John Wilkes Booth?”
“You’re crazy, Booth was not a…”

“And that John Brown invented the cotton gin, and is therefore directly responsible for a dramatic extension of slavery?”
“I have never heard such a ridic…”

“Or that he had a romantic affair with Susan B. Anthony?”
“Enough!, I yelled, “these exaggerations of yours can and will not stand!”
But a satanic glow had come to his eyes, and I perceived that Longstreet’s infantry was once more gathering in the woods of Seminary Ridge…and it was again the afternoon of July 3, 1863 at Gettysburg. I needed a diversion, so I turned to my wife. She was asleep in her chair…her lower lip gently fluttering, her margarita half consumed. So accustomed to our periodic historical debates, she had taken the opportunity to enjoy a brief nap before dinner.
And then an extraordinary thing happened. My friend’s lovely consort…an angelic resident of the border State of Maryland…suddenly assumed the role and appearance of Henry Clay: “The Great Pacificator.” The tension of the moment was broken, as she cheerily declared:

“I have a present for you.”
“And what might that be?,” I replied, hoping for at least a bayonet with which to defend myself.
Excavating her stylish purse, she extracted a shiny coin and placed it into my still quivering hand. It was two bits…a quarter…and I gazed into the eyes of George Washington, the Virginia slaveholder.
“I don’t quite understand…”
“Turn it over,” she chirped.
My buddy emitted a audible groan, as I joyously proclaimed: “It’s John Brown’s Fort!!”

Now, as an impressionable youth, I collected postage stamps. Through commemorative issues, I learned American history. To this very day, I can recite the presidents in sequential order, thusly: 1 cent Washington, 2 cent Adams, 3 cent Jefferson, 4 cent Madison, etc.
One thing I never saw (and no doubt never will) is a stamp featuring John Brown. Why, as my buddy would say, he was a “traitor”…and hanged as such. Now, of course, there is a 1937 commemorative stamp picturing two Virginians…the aristocratic Robert E. Lee and the plebeian Thomas J. “Stonewall” Jackson. Apparently they eluded the “traitor” test. Both received a government funded education at West Point, but later took up arms against that very government. Talk about biting the hand that feeds you!
Thus my joy and surprise to see the name John Brown pressed into the reverse  of my shiny two bits! So how did this come about?
In 2010, the United States Mint inaugurated its “America the Beautiful Quarters Program.” Through this twelve year initiative, a total of fifty-six quarters will be issued…commemorating some of America’s most beautiful and historically significant sites. Among the five coins of 2016…the centennial of the National Park Service…is one honoring Harpers Ferry National Historic Park.
The “iconic” image of John Brown’s Fort was chosen for the obverse side of the coin. The artist, Thomas Hipschen, a “regular visitor to Harpers Ferry for the past 40 years,” stated: “It’s the only part of the original arsenal (sic) that still exists. It’s a major point in history; it was almost a trigger point for the Civil War. Later on, it became a meeting place for black groups that turned into the NAACP organization. It just has so many different points in history that make it important.”
On June 8, 2016, hundreds of people gathered at Harpers Ferry to attend the ceremony formally releasing the commemorative coin. John Brown could be in your pocket!

A coin in hand, I found myself mellowing…and anxious for a night out at a restaurant in my metropolis of 3500 people. My buddy, too, gazed benevolently in my direction. So I removed the blue kepi…he the gray. I unloaded my Springfield musket…he his Enfield. And the sectional crisis eased.