If you live in the area of Evanston, Illinois, you have a great opportunity to hear Steven Lubet read from his book,  The “Colored Hero” of Harper’s Ferry: John Anthony Copeland and the War Against Slavery, just published last month by Cambridge University Press.   Steve will be reading at Evanston's Bookends and Beginnings, on Thursday, October 22, from 7-8:30 P.M.  Bookends and Beginnings is located in the alley on the west side of the 1700 block of Sherman Avenue, in the former location of Bookman’s Alley.   If you are able to attend, don't miss hearing this notable legal historian and ethicist read from one of the most exciting and well greeted contributions to the field of antebellum African American history and John Brown studies, an in depth study of one of Brown's unsung black raiders.

Steven Lubet is the Edna B. and Denyfed H. Williams Memorial Professor of Law at Northwestern University, and is a leading authority on African American resistance to slavery and notable trials in U.S. history.  He has written notable works like Murder in Tombstone: The Forgotten Trial of Wyatt Earp,  Fugitive Justice: Runaways, Rescuers, and Slavery on Trial, and more recently, an unprecedented study of Harper's Ferry raider, John Cook entitled, John Brown's Spy: The Adventurous Life and Tragic Confession of John E. Cook (Yale Univ. Press, 2012).

Lubet's work on Brown's raiders, Cook and (now) Copeland, are tremendous contributions to the study, offering needful focus on the men who followed the Old Man to Harper's Ferry.  This book on Copeland provides a treasure of information and insight into his life and background, and I highly recommend it.  Here are some reviews furnished by the publisher: 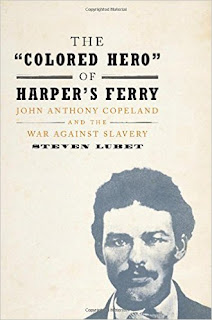 "In this vivid account of John Anthony Copeland and his times, Steven Lubet has recovered from unjust obscurity the story of a young man of deep passion and moral commitment. With both narrative verve and a telling eye for the dramatic, he has also given us an intimate portrait of the competing worlds of slavery and abolitionist activism on the cusp of the Civil War. The 'Colored Hero' of Harpers Ferry is a significant addition to our understanding of the brave but tragic saga of John Brown and his men."  Fergus M. Bordewich, author of America's Great Debate: Henry Clay, Stephen A. Douglas, and the Compromise that Preserved the Union

"The 'Colored Hero' of Harpers Ferry is a well-researched and highly readable work of scholarship. Steven Lubet chronicles in fine detail the life and tragic death of a 'colored' participant in John Brown's ill-fated raid on the arsenal at Harpers Ferry. The author brings the raid, its characters, and its aftermath to life in vivid detail, never abandoning the thread that ties the idealistic young John Anthony Copeland to the antebellum movement to abolish slavery."  Ron Soodalter, author of Hanging Captain Gordon: The Life and Trial of an American Slave Trader, and The Slave Next Door: Human Trafficking and Slavery in America Today

"In this well-researched and well-written book, Steven Lubet tells the tale of John Anthony Copeland, one of only five black men to join John Brown in his attack on Harpers Ferry. By focusing on one of the men, and on a black man, Lubet has given us a fresh and fascinating perspective on the months just before the Civil War."  Walter Stahr, Presidential Fellow, Chapman University

"Steven Lubet is a master storyteller. In this book, he tells the story of a little-known well-educated black man, John Anthony Copeland, who joined John Brown at Harpers Ferry. The insurrection is told from the perspective of Copeland, a pious abolitionist who thought he was there to rescue enslaved people and escort them to freedom as he had helped runaways to Canada before … Copeland was one of only five black men who were recruited to John Brown's cause, though he only knew of Brown's true purpose shortly before the shooting began. From Lubet's careful reading of original material, he is able to piece together a thoroughly engrossing tale. A story to be read and remembered."  Lea VanderVelde, Josephine Witte Professor of Law, University of Iowa College of Law