I have a good buddy who, though born and reared in the Midwest, resides within the confines of the Commonwealth of Virginia. A truly gifted historical investigator, he has, however, absorbed a Southern mindset in regard to John Brown...which impels him to continually tease yours truly for my passionate devotion to researching “The Old Man.” To this friend, the “terrorist” Brown is fully responsible for nearly all societal ills, ranging from global warming...to Congressional dysfunction...to market fluctuations within the Bolivian economy. And he is sure that, should I continue upon this misguided course, my ultimate destination will be The Everlasting Tropics. It is therefore truly ironic that it was while my friend and I were strolling together at an antique show, that I purchased my first piece of John Brown souvenir china.

It was deep within the enemy’s country, in Chantilly, Virginia, that I spotted a creamy-white porcelain dessert plate...decorated with the familiar image (based upon a photograph) of Brown’s birthplace in Torrington, Connecticut. In addition to this rendering of that classic New England saltbox farmhouse, surrounded by a stone wall, the periphery of the plate featured cutwork and was embellished with gilded oak leaves. The reverse revealed the plate’s origins...”Made in Germany”...and carried the name “P. O’Meara, Torrington, Conn.”

Thousands of such items were produced in Germany and Austria...particularly in the two decades prior to World War I...and marketed as take-home souvenirs in this country.  They were often marked with the name of the domestic distributor...in this case, “P. O’Meara” is probably one Patrick O’Meara, a native Irishman shown in the Torrington censuses of the early 20th century as a “tea merchant.”

I am certain that readers of this blog are familiar with such souvenirs, many of which were no doubt sold in your own hometowns. Whether they were decorated with images of the local high school or courthouse...or the mansion of some regional luminary...these bits of tactile history were seemingly ubiquitous. In my own place of residence...Galena, Illinois...a local jeweler by the name of Coatsworth sold hundreds of pieces of glassware and china picturing either the pre-war or post-war homes of our famous citizen, General Ulysses S. Grant.

Since my initial find in Virginia, I have obtained several other examples of this “birthplace china,” including a small cream pitcher and a matching cup and saucer. I append images of these items, and I’m sure there are more varieties of “John Brown china” out there. So remain vigilant!

While on the subject of the site of John Brown’s birth, I must admit that it was only quite recently that I finally paid a personal visit.  I had passed through Torrington any number of times in years past...and was aware that a commemorative stone marked the historic spot...but I had never made the effort to find it. For some oddball reason, I always assumed that it sat in some urban neighborhood...perhaps in some guy’s yard, strategically placed between the Weber grill and the house of an exceedingly vicious dog.

In reality, the site of the birth of John Brown remains rather bucolic. It sits upon the northern edge of...you guessed it...John Brown Road, immediately northwest of the City of Torrington. It consists of, literally, a grassy clearing in the forest, surrounded by rubble stone walls...in the midst of which reigns a lichen-encrusted granitic boulder, inscribed with the words: “IN A HOUSE ON THIS SITE JOHN BROWN WAS BORN MAY 9, 1800.”

My visit occurred in early spring, so with the trees flowering and birds beginning to become territorial, one could almost imagine old Owen Brown’s oxen lowing in the nearby pasture (or perhaps this was simply an unintended side effect of the beer hall the prior evening). Anyway, I remember being impressed by the seeming isolation and tranquillity of the place.

Although a detailed history is not my intention, there are some significant dates within the chronology of the birthplace of John Brown. His father Owen took possession of the property and some adjacent acreage in 1799 - 1803. Following the family’s emigration to the Ohio Western Reserve in 1805, an impressive number of owners and tenants “used and abused” the house (some of whom were African-Americans). Souvenir hunters became a problem...producing artwork from shingles and canes from wooden beams. (Much like what occurred at the Maxson farmhouse in Iowa, as noted  in an earlier contribution.)

Finally, in 1901, the property was purchased by a philanthropist and transferred to a nascent organization of prominent businessmen and politicians called the John Brown Association. It was at this point that the first attempts of restoring and managing a formal historic site was commenced, including the appointment of a live-in caretaker. This Association, underfunded and lacking a solid organizational structure, was beset for years with numerous lawsuits and a host of leasing and ownership controversies. 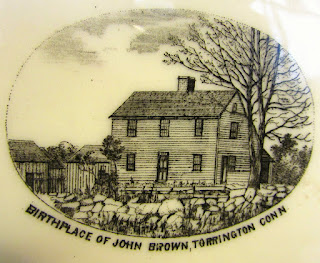 Of course, one of the most significant dates in the history of the property was June 19, 1918, when the farmhouse in which John Brown had been born burned to the ground. An overheated chimney was the probable culprit. The commemorative boulder has marked the spot since 1933.

Today, the property is administered by the Torrington Historical Society, which merged with the John Brown Association in June of 2000. In 2002, an archaeological investigation of the site was conducted, the parcel then receiving the designation as a State Archaeological Preserve.


For those interested in further information in regard to John Brown’s birthplace, I strongly recommend a publication available from the Torrington Society: The John Brown Birthplace by David Ross Bennett (2002).