Time does not permit me to write at length about the legendary black baby kiss by John Brown, portrayed in text and paintings many times over since 1859.   For years, of course, scholars have known that the abolitionist kissed no black baby on the day of his execution, despite the famous artistic portrayals of the 19th century.  On the day and hour of Brown's final ride from the jail to the site of his hanging on December 2, 1859, 11:00 a.m. EST, Charlestown, Va. (now West. Va.) was so full of military personnel that it would have been impossible for anyone to come within kissing distance of the old man as he left the jail and stepped up into the furniture wagon that carried him to the gallows.  Furthermore, citizens and their enslaved people were prohibited from leaving their homes, and the execution was closed to the public in general.  Only a small number of non-military personnel were present at the hanging, such as local officials like Prosecutor Andrew Hunter and reporters. 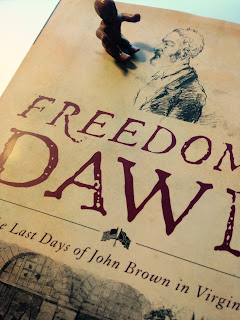 However, in Freedom's Dawn: The Last Days of John Brown in Virginia, I maintain that Brown did indeed kiss a black child, although not on the day of his hanging.  I will not go into detail, mainly because I'd rather you read it in the book.  But suffice it to say that the kissing of the black baby far more likely took place early in Brown's confinement in Charlestown, following his defeat at Harper's Ferry.  I do not believe the baby kiss incident was either invented or was the product of a conflation of other incidents, including the kissing of the jailer's child on the day of execution--an event that also happened by the way.   It is far more likely that the kissing of the black child, which happened in October, was overlooked by journalists and interpolated in the final scene of Brown's life in Charlestown reported in the New York Daily Tribune.

So, for those who like the fine details of history, yes, John Brown did kiss that black baby after all.
Posted by Louis A. DeCaro, Jr. . . at 3:58 PM