Cinema--
The Charlestown Jail Scene in "Prince of Players" 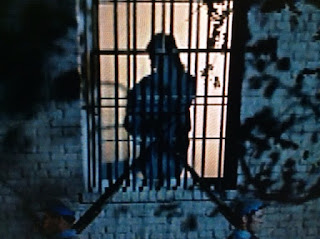 The IMDb website remembers the 1955 film production, "Prince of Players" as a

tragic and sentimental story that depicts the early career of the 19th century American actor, Edwin Booth with some mention of the events leading to the assassination of President Lincoln by Edwin's brother, John Wilkes Booth. In the film, Edwin's days in the spotlight dwindle shortly after his brother is caught and killed for assassinating Lincoln.

The film is largely based upon the life of Edwin Booth, and provides little dramatization of his brother's life, the infamous assassin of President Abraham Lincoln.  The screenplay for "Prince of Players" was based upon the popular (but apparently not annotated) historical narrative, Prince of Players: Edwin Booth (1953), by Eleanor Ruggles.   The film starred Richard Burton as Edwin Booth, John Derek as John Wilkes Booth, and Raymond Massey--famous for his portrayal of Lincoln and Brown in other films--as their tragic father and acting forebear, Junius Brutus Booth.  The film says little about the mounting crisis over slavery, but conveys sufficiently that Edwin was loyal to the Union, while his infamous brother became a bitter defender of the South.   The movie somewhat drags along because, mainly it's a story about a 19th century Shakespearean actor's career, his brief marriage to a wife who died in 1863, and how he overcame his personal demons as well as the shame brought upon the Booth family by his fanatical brother's assassination of Lincoln.  The film does not show or even mention that the real Edwin Booth actually saved Robert Lincoln, the eldest son of the President, from a near fatal accident at a train station in Jersey City, NJ, in 1864.  Nor does it give much detail about Edwin Booth's prestigious career in New York City, that lasted into the early 1890s. 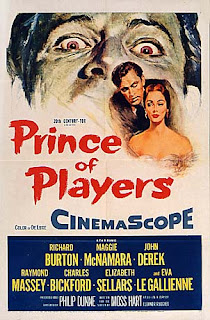 Obviously, my interest in "Prince of Players" is the scene when Edwin Booth is urged to reach out to Wilkes Booth by their worried sister, Asia.  Without context, the film portrays the two concerned siblings in a stage coach, where Edwin stops in an unnamed town to find John.  The aberrant actor is portrayed in a bar, making some kind of a political speech about the necessity of Brown's hanging.   In the story, Edwin had excelled his ambitious brother in acting, while John Wilkes had found a new calling in political subversion.  The former, seeking to save his brother from political folly, thus offers John an opportunity to co-star with him on the London stage.  To this, John Wilkes Booth says, "I want to show you something," and leads his brother outside of the bar, where they can see the shadow of Brown pacing in jail cell through a barred window.  (In reality, the side of the jail faced a street, not a bar.)

John Wilkes:  "There he is, John Brown.  Look at him, Ned, pacing up and down his cell, dreaming of an army with banners that will come to rescue him.  But it is not coming."

Edwin:  "Why do you hate him so, a man you have never known?"

John Wilkes: "Hate him?  I don't hate him.  In his own way he is a great man.  But to destroy greatness is to partake of greatness.  Shakespeare knew that.  Remember, Ned, when he had Brutus say to Caesar, 'Let's carve him as a dish fit for the gods'? Shakespeare never wrote drama like this.  John Brown will die tomorrow.  Not play acting at death, but to rise for the applause as the curtain falls.   Swing by his neck as the sun comes up in mortal anguish.  Listen to those voices--not supers [supernumeraries] in the wings, real men, whose voices are real.  That sound could fill this land with agony.   Ned, there must be more glory to life than bowing and smirking to an audience--more fame than a well spoken Hamlet.  There's a mortal drama beginning to be played out here that's worth a thousand Hamlets.  That's the stage to play upon, Ned.  The smell of life and blood in your nostrils.  Waiting for your cue until destiny speaks the line. . . ."

At this point, Booth is summoned back into the bar, and bids his brother farewell.


Of course the scene is fictional.  Not only did Edwin not meet his brother at Charlestown on the night before Brown's hanging (Thur., Dec. 1, 1859), but Booth had come to town under the auspices of a Richmond militia group and was in uniform.  Although he was hardly incognito, he was "acting" like a soldier in uniform.   Interestingly, however, Moss Hart's screenplay preserves something of the warped admiration that Booth later expressed for Brown.  Although the proslavery actor wanted the abolitionist to die, even risking his acting job to travel to Charlestown to observe the Old Man's death, he did feel Brown was admirable for his bravery.  Hart's script puts the words of "greatness" in Booth's mouth, insinuating that Booth's desire to destroy greatness would ultimately lead the actor to assassinate Abraham Lincoln.

According to Ruggles' book, Booth’s sister, Asia, recalled that her brother John had witnessed the hanging of Brown and “felt a throb of anguish as he beheld the old eyes straining their anxious sight for the multitude he vainly thought would rise to rescue him.”  Asia later recalled that John Wilkes told her, “Brown was a brave old man; his heart must have broken when he felt himself deserted.” (Prince of Players: Edwin Booth, p. 119)   As David Reynolds has recently observed:


In a letter of December 1864, shortly after Lincoln was elected to a second term, Booth wrote bitterly of the president: “He is standing in the footprints of old John Brown, but no more fit to stand with that rugged old hero—Great God! No. John Brown was a man inspired, the grandest character of this century!” (Reynolds, "John Wilkes Booth and the Higher Law," The Atlantic, 15 Apr. 2015)

This is where Hart's screenplay insinuates his own view of Lincoln's greatness rather than reiterating Booth's actual sentiment.  As Reynolds would have us understand, Booth did not feel that being part of the deaths of both Brown and Lincoln was to "partake of greatness."  Quite in contrast to Brown, whom Booth recognized as fundamentally profound, the man who finally assassinated Lincoln thought his victim was coarse, vulgar, and disgraceful.

On the other hand, Booth himself misread Brown as having been disappointed in hope of rescue on the day of his hanging, and that he felt deserted.   Like so many other Virginians, Booth was fed propaganda about Brown--his supposed disappointment in the loyalty of local blacks and his last minute desire for rescue being two inventions of the Virginia press.  Neither was true--Brown was quite aware that local black people had shown great enthusiasm, and if he was disappointed in blacks, it was in the free black leadership of the North.  Nor was Brown hoping for rescue as he mounted the gallows (at eleven o'clock in the morning, not at sunrise as stated in the film).  To the contrary, if Brown entertained the possibility of being rescued, he did so only briefly at the onset of his capture. It quickly became clear that he would not be rescued, and he seized upon this hopeless situation with a surprising joy and contentment.  He consistently decried and refused any suggestion from visitors and allies of a rescue.  The man who stood on the gallows in Charlestown was actually quite calm, satisfied, and only looked upon the crowd with one stated regret: that the authorities had not permitted the general public to attend his execution.

In the end, "Prince of Players" at least put one profound truth into the mouth of John Derek's John Wilkes Booth: certainly Shakespeare never wrote drama like this.