The Charlestown Jail in Images

The Charlestown jail, then in Virginia and today in West Virginia, was where John Brown spent the last weeks of life.  Unfortunately, the building is no longer standing, although it can still be seen in a number of pictures that have survived over the past century, especially in postcards that pop up online from time to time.

Perhaps Charlestown historians could provide far greater detail, and it would be welcomed here.  We can say the jailhouse was not originally built as a jail, but as a private residence.  At some point, the two-story building was converted into a jail, which included a residence for the jailer.   During Brown's stay, of course, the jailer was John Avis, who was married and had a family.  More about Avis can be found in my forthcoming book. 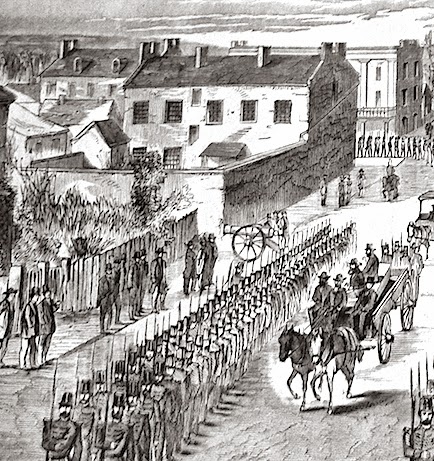 In the first picture at the right, I have provided a detail from an illustrated newspaper sketch that shows Brown being taken on a wagon to the site of execution.  The artist captured an excellent rear view of the jailhouse, showing the 12-13 ft. wall that surrounded the back yard, the barred windows, and the back entrance.  Perhaps there is also a small guardhouse to the left. Next is another postcard artist's rendering of the rear view of the jail, in this case a night scene showing guards at the walls. 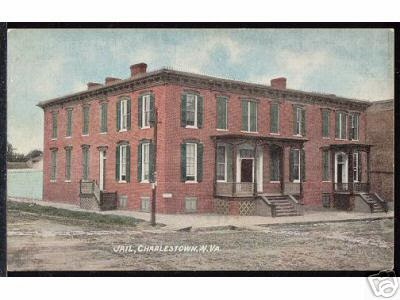 The third image shows the building in the late 19th century or early 20th century.  This image provides color and detail to the building, although, once more, it is from a later time and I have no idea if this was simply colorized for style (it is also a postcard that appeared on eBay).  It may be that the larger front entrance was an addition to the building made after Brown's time.  The larger entrance does not seem to be visible in newspaper sketches of the jail at the time of Brown's incarceration.  Clearly, windows on the street side of the building either were added or restored at a later point.

Brown's cell was located on the first floor, and during his incarceration, he had only one window looking into the enclosed backyard. At least once, he was known to have stood on his chair in order to get a view somewhat over the back wall of the troop movements in town. 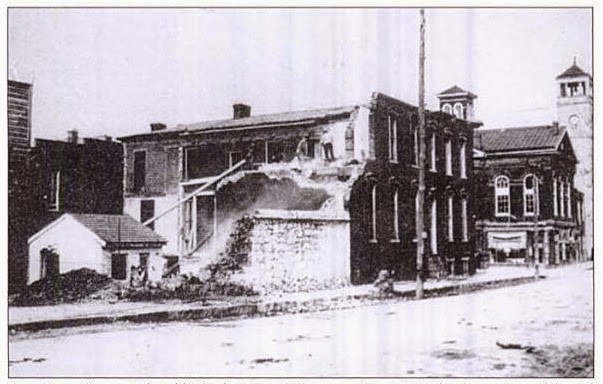 Finally, here is a photograph taken in the early 1900s, when the jailhouse was torn down.  Unfortunately, it was not preserved as a landmark, as it would have served as a great point of interest today.  The Charles Town post office is now situated on the site of the old jail.
Posted by Louis A. DeCaro, Jr. . . at 8:35 AM