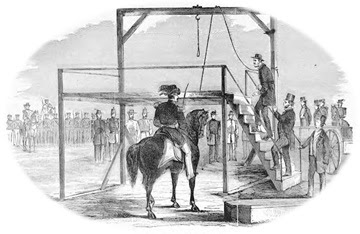 
Slavery has killed John Brown.  We state the fact simply, and not by way of complaint.  We have discouraged all appeals by others than Virginians to the clemency of the Slave Power in the premises.  Slavery and John Brown were foes to the death; Slavery for the moment is victor, and the law of the exigency is a very old one, Va victis—We to the conquered!  John Brown defeated and a captive?  War has its necessities, and they are sometimes terrible.  We have not seen how Slavery could spare the life of John Brown without virtually confessing the iniquity of its own existence.  We believe Brown himself has uniformly taken this view of the matter, and discountenanced all appeals in his behalf for pardon or commutation, as well as everything savoring of irritation or menace.  There are eras in which death is not merely heroic but beneficent and fruitful.  Who shall say that this was not John Brown’s fit time to die?

“We are not of those who say, ‘If Slavery is wrong, then John Brown was wholly right.’  There are fit and unfit modes of combating a great evil; we think Brown at Harper’s Ferry pursued the latter.  We dislike Popery; yet we did not therefore feel justified evil, when we saw the Pope pass in ostentatious procession, in a palanquin born on the shoulders of men, surrounded by an armed legion and reverenced as a demi-god, to shy a stone at his head, much less point a pistol at his breast.  We have never felt at liberty, while in a Slave State, to do any act inconsistent with the laws and fixed polity of that State.  If any slaveholder introduces the topic, we respond to his suggestions; but we never begin the discussion.  And, while we heartily wish every slave in the world would run away from his master to-morrow, and never be retaken, we should not feel justified in entering a Slave State to incite them to do so, even if we were sure to succeed in the enterprise.  Of course, we regard Brown’s raid as utterly mistaken and, in its direct consequences, pernicious.

“But his are the errors of a fanatic, not the crimes of a felon.  It were absurd to apply to him opprobrious epithets or wholesale denunciations.  The essence of crime is the pursuit of selfish gratification in disregard of others’ good; and that is the process opposite of Old Brown’s impulse and deed.  He periled and sacrificed not merely his own life—that were, perhaps a moderate stake—but the lives of his beloved sons, the earthly happiness of his family and theirs, to benefit a despised and down-trodden race—to deliver from bitter bondage and degradation those whom he had never seen.  Unwise the world will pronounce him—reckless of artificial yet palpable obligations he certainly was—but his very errors were heroic—the faults of a brave, impulsive, truthful nature, impatient of wrong, and only too conscious that ‘Resistance to tyrants is obedience to God.’  Let whoever would first cast a stone ask himself whether his own noblest act was equal in grandeur and nobility to that for which John Brown pays the penalty of a death on the gallows.

And that death will serve to purge his memory of any stain which his errors might otherwise have cast upon it.  Mankind are proverbially generous to those who have suffered all that can here be inflicted—who have passed beyond the portals of the life to come.  John Brown dead will live in millions of hearts—will be discussed around the homely heart of Toil and dreamed of on the couch of Poverty and Trial.  To all who have suffered for human good—who have been persecuted for an idea—who have been hated because of their efforts to make the daily path of the despised and unfortunate less rugged—his memory will be fragrant through generations.  It will be easier to die in a good cause, even on the gallows, since John Brown has hallowed that mode of exit from the troubles and temptations of this mortal existence.

Then as to the ‘irrepressible conflict:’ Who does not see that this sacrifice must inevitably intensify its progress and hasten its end?  Thirty Millions of Americans—including the Four or Five Millions of Slaves—are talking and thinking of John Brown—of his daring, his purpose, his defeat, and his death.  How can the most hostile, the most stolid, suppress the questions—What was it that required the execution of John Brown?  How came such a man to die the death of a felon?  What is the Juggernaut that demanded this bloody sacrifice?  Admit that Brown took a wrong way to rid his country of the curse, his countrymen of the chains of bondage, what is the right way?  And are we pursuing that way as grandly, unselfishly as he pursued the wrong one?  If not, is it not high time we were?  Before censuring severely his errors, should we not abandon our own?

Yes, John Brown dead is verily a power—like Samson in the falling temple of Dagon—like Ziska, dead, with his skin stretched over a drumhead, still routing the foes he bravely fought while he lived.  Time will doubtless make plain the object and effect of this sacrifice, and show the errors of Man overruled and made beneficent by the wisdom and loving justice of God.  So let us be reverently grateful for the privilege of living in a world rendered noble by the daring of heroes, the suffering of martyrs—among whom let none doubt that History will accord an honored niche to Old John Brown.”