In Remembrance--
That Sunday Night, 152 Years Ago 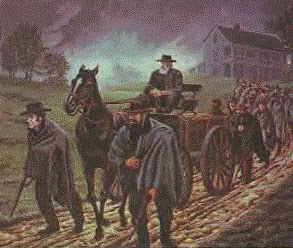 Although the presentation of Brown in the U.S. has shifted considerably from the 20th century's predominant tone of malicious prejudice, a good deal of misinformation and stupidity still abounds in the popular mind about Brown and his efforts in Kansas and Virginia.  It is likely that this will continue to some degree because of recalcitrant racism and pro-Southern sentimentality that taints national life to this day.  However, Brown has always had his critics among pacifists and idealists who somehow think that they know better than did those living in 1859 about the possibility of resolving slavery's injustice without the use of "violence."   For our part, we see the Harper's Ferry raid as the great moment of our nation's history--when an "army" of young, devoted, and justice-minded men, white and black, endeavored to launch a freedom movement.  Contrary to what is now being published abroad, the failure of the raid in no wise disqualifies the plan or the motivation behind it in historical terms.  It was a glorious effort, a reasonable strategy, and a sane and noble effort to overthrow slavery throughout the South without instigating widespread insurrection.  That Sunday night, 152 years ago was the mark of a special presence in our nation's history, but one that has been overlooked, disdained, and misinterpreted by a society that is largely mis-  or uneducated about the realities of racist chattel slavery in this country.

I have not had the opportunity to read the published version of Tony Horwitz's new book, although I have previously offered a response to the pre-publication manuscript.  In that penultimate version, I took issue with a number of things, especially Tony's tendency to disdain Brown's efforts and rationale, concluding that he essentially threw the raid in order to attain his goal of becoming a martyr.  I think this is highly problematic for a number of reasons, not the least of which it is unfair to the fullest extent of the record, and essentially means that John Brown himself was either lying or deluded in his retrospective remarks about the raid.  And frankly, I believe Brown more than I do Horwitz.  While I doubt that the final version of his book will differ considerably from the pre-publication draft, I should not comment further until I've given the published book a fair reading--and right now, if my readers haven't already noticed it, since my teaching responsibilities resumed, it's been hard enough for me to keep up with this blog let alone catch up with the pile of "to read" material on my desk.  I have seen one review of Tony's book that was pleasantly neutral, if not favorable, toward Brown despite my serious reservations about Tony's conclusions.   Nevertheless, Tony's book doubtless will add some vigor and rigor to forthcoming discussions and debates, although I suspect it will find its biggest impact in the wider reading market that has not heretofore paid attention to the John Brown theme, but will do so because of their interest in Tony's noteworthy efforts in popularizing forgotten history.  His book will prove considerably less weighty in John Brown circles, although it should not be dismissed either, since he has worked hard in his research and written an interesting book in many respects.  Still, it is already manifest that Tony's portrayal of Brown is not going to satisfy many of us, particularly those of us who comprise what Larry Lawrence calls "the John Brown community."

But this is the stuff of what we do.  Indeed, it is all that we can do, 152 years later--reflecting, analyzing, speculating, writing, debating, talking, and dreaming of one of the most moving, exciting, and powerful stories in the history of the United States and the larger story of the struggle for justice.
So, dear readers, "get on your arms; we will proceed to the Ferry"--if only in memory and imagination.

On October 16, 1978, I walked from the Kennedy Farm to Harpers Ferry using the same route as John Brown and the raiders. The footpath over the train bridge was not built yet, so (with NPS rangers acting out of hierarchy context) the padlock on the train bridge was removed and we single-filed across. When we got to the enginehouse, there was a roll-calling ceremony. I answered for Osborne Anderson. Then something happened I will never forget, nor what it taught me. Some of the young NPS rangers (whom I will not name just in case they may still get in trouble) staged the gunfire that killed Hayward Shepherd. It was dark--there was no moon, as in 1859. I could not say from which direction or how many shots were fired. This taught me about witness reliability.