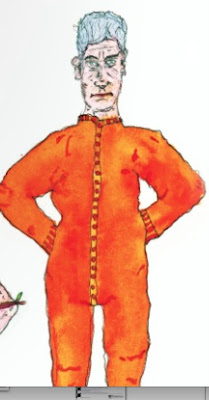 Recently, Rachel Smalter, an Adults Program Librarian at the Lawrence, Kansas, Public Library noted in her blog, Librarian in a Banana Suit (yes, a real banana suit), that Lawrence Magazine had a link for a download of a (clean shaven) John Brown paper doll by an artist named Jason Barr.  According to Rachel, Lawrence Magazine, Lawrence Public Library, and the artist subsequently joined forces to come up with a John Brown Paper Doll giveaway in conjunction with local Civil War events at the library.  Rachel says the John Brown paper doll program is part of "Civil War on the Western Frontier" (CWWF), a series of annual community events organized by the Lawrence Visitor’s Bureau.  Of course, the paper doll kit is purely amusement.  This is not about dressing the Old Man in a variety of authentic outfits of the day, but rather attiring him in a gorilla suit,  or a jean shorts and T-shirt that reads, "Honk 4 Hemp," or a clown mask, a long, black fake beard, and other amusing accouterments.

Moving from this flippant sort of pop cultural handling of the Old Man, another Lawrence-based publication recently was called to my attention.  It is entitled, "What Would John Brown Do?"--perhaps a spin-off of the "What Would Jesus Do?" Christian style fad, in which believers wear T-shirts, caps, and bracelets emblazoned with "WWJD?"  Whatever the case, there is an article by Amber Brejcha Fraley featuring ten questions with answers supplied by a number of notable Lawrence citizens: Kerry Altenbernd, a law librarian and John Brown impersonator; Katie Armitage, a historian of Lawrence; Napoleon Crews, an attorney and author; Karl Gridley, another Lawrence historian with a special interest in John Brown; Kevin Willmott, filmmaker and creator of the "mockumentary," CSA: Confederate States of America; and Cathy Hamilton, a humorist and director of Downtown Lawrence, Inc.  The article features amusing photographs and thoughtful responses to the questions which are too lengthy to reproduce here, but can be read at the link above (or here).

For what it's worth, I've reproduced the questions below and presumed to present my answers/opinions as well. . . .