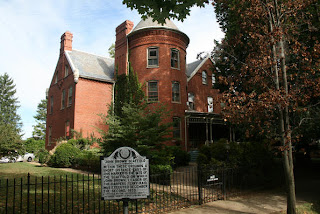 The field were John Brown was hanged in 1859 later became the site of a 7,000-square-foot, five-bedroom Queen Anne Victorian mansion.  Built in 1891, the mansion subsumed the actual site of Brown's gallows, the place now being the yard with a white obelisk and a plaque.  According to the Associated Press, the mansion and property have been placed on auction to be sold in early September, the opening price being $950,000.  The mansion, known as the Historic Perkins House, is on the National Register of Historic Places and is pretty much in the same state as it was in 1891, although some features have been added, like a swimming pool and a gourmet kitchen.
Posted by Louis A. DeCaro, Jr. . . at 1:05 AM

Hasn't this house been on and off the marker for years? It seems like it constantly has a For Sale sign out front, or at least has since my first visit in 2006...