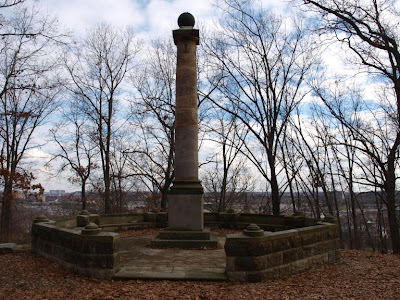 ﻿"This is a memorial to the famed abolitionist, John Brown – an Akron resident in the 1840s. The area is not far from Brown's former home, on Diagonal Road, where he lived and raised sheep for Col. Simon Perkins, of Akron's founding family.
The German-American Alliance erected the pillar in 1910 on land that would later become Perkins Woods Park. The memorial's centerpiece is a 20-foot sandstone column salvaged from the portico of the original Summit County Courthouse that was razed in 1905. Long gone is the bronze eagle that perched on the sphere that sits atop the pillar.
In 1938, a group called the Negro 25 Year Club added a 30-foot-diameter stone bench surrounding the pillar, a paved flagstone interior and a 6-foot high stone slab with a medallion bearing the likeness of Brown, by local artist Stephen Gladwin. The marker declares, 'He died to set his brothers free. His soul goes marching on.'
The memorial was restored and rededicated in 1975 – Akron’s sesquicentennial year. Since then, the adjacent Akron Zoo has expanded and incorporated the memorial within its boundary. This part of the zoo is undeveloped and wooded – no indication is made of the memorial’s existence."
Source: Waymarker.com, posted January 4, 2011
Posted by Louis A. DeCaro, Jr. . . at 11:29 PM

Lou, I have a full page newspaper story about Jason attending the unveiling of the monument. Fascinating. The memorial is only accessible now by arrangement with the PR department of the Akron Zoo, and there are no plans to return it to the public. So sad that this one is hidden behind fences, and the one in Kansas city is in need of repair. My ggg granddaddy is missing his nose and the lights are broken and full of trash, and the memorial is surrounded by boarded up buildings.