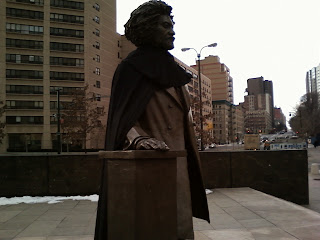 Pimp My Hero--
CAPED CRUSADER?  NBC’s TACKY PROMO OP DEFACES FREDERICK DOUGLASS SITE
Yesterday I was rushing to work, about to go and catch the C Train at Frederick Douglass Circle (at the northwest corner of Central Park) and happened to glance over at the statue of Frederick Douglass, whose memorial I have previously featured on this blog (June 21, 2010).  I noticed that he was clad in long black cape, and at first I thought it was some kind of grassroots tribute from an admirer in the area.  Then I realized there was some kind of structure next to the statue with writing on it.  When I crossed the street and approached the memorial and statue, I was quite shocked to find that the cape was placed there—undoubtedly with the permission of New York City government—by NBC television, and that it was a promotional effort to plug their forthcoming hero fiction, “The Cape.” 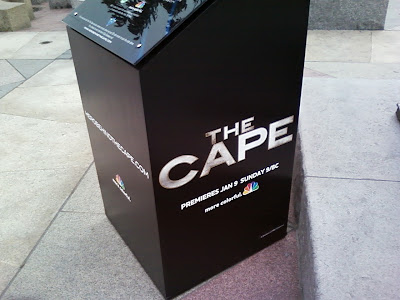 I took these hurried pictures that I have posted here so that my readers and others can see it—what certainly must be the most opportunistic and shabby effort I’ve ever seen done to the disadvantage of a historical memorial under the category of legality.  First of all, the person at NBC who thought of this should be reprimanded, and the corresponding official of New York City government likewise should be demoted for allowing this kind of tacky display being made at the expense of the Douglass memorial, even if the City needs the money that NBC probably paid them for this irreverent advertisement.
If Mayor Bloomberg knows about this, then he should apologize, not only to the African American community, whom Douglass first represents, but to all citizens who value the heroic struggle for human rights and the exceptional role that Douglass played in the long process of civilizing this racist society.  I’m afraid that the late Neil Postman, author of Amusing Ourselves to Death, was more than correct in his assessment that television has reshaped our nation into a society based upon entertainment.  When NBC can promote a silly new TV program about a caped crime fighter upon the historical shoulders of one of the greatest figures in our nation’s history, it’s time to unplug.  Notwithstanding the black cape on the Douglass statue itself looks nice in a wintery scene, its function in advancing NBC’s race for ratings and profit is outrageous. 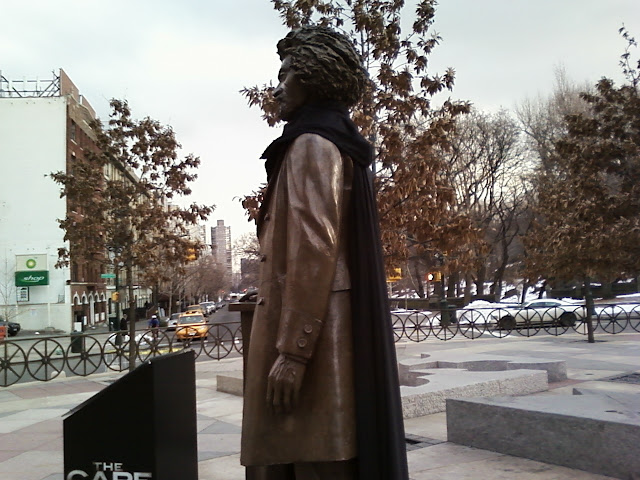 It's worse than I feared.  New York City Parks and Recreation have pimped out about thirty statutes in the city for NBC's "The Cape" promotion.  This report is found on the website, TV by the Numbers:


UNIVERSAL CITY, Calif. – January 5, 2011 – NBC will introduce a new superhero this month with the premiere of the drama series “The Cape,” and in anticipation of the show’s two-hour premiere on Sunday, January 9 (9-11 p.m. ET), NBC will partner with the New York City Department of Parks and Recreation for a unique campaign to highlight historic statues all over the city.

Beginning Wednesday, January 5 through Sunday, January 9, 30 of New York City’s historic statues will be outfitted with custom capes along with a plaque describing each hero’s greatest achievement and the similarities between the character traits of the star of “The Cape” Vince Faraday (David Lyons).

The statues range from a Revolutionary War hero who was the nation’s first President, to the leader in the fight for Cuban independence and to the world’s greatest playwright, New York City is home to a plethora of monuments and statues that pay homage to many great heroes.

Statue visitors will also be able to enter the “Hero Behind the Cape” giveaway contest using FourSquare and Twitter.