Mary Ellen Pleasant Grave Restoration in California: “She was a friend of John Brown”
Special submission by Jean Libby, scholar, documentarian, and editor of Allies for Freedom

DEC. 28--Well over one hundred years after Mary Ellen Pleasant’s burial in the Tulocay Cemetery in Napa, California, the grave of the Mother of Civil Rights in California is going to be restored from damage caused by the E Clampus Vitus fraternal organization. 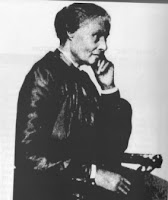 Mary Ellen Pleasant led a long and active life in support of enslaved African Americans, fugitives and freedom-seekers, and the pioneer black community in San Francisco through the institutional churches. Her role with John Brown was to bring donations from the black community to Chatham, Canada West, Committee of Vigilance that included Mary Ann Shadd and Osborne Anderson in 1858. According to research by Gwen Robinson of the Black Heritage Museum, Mary Pleasant purchased property which was to be used by the liberated people settling there. Chatham and Buxton were already settled by African Americans who were self-liberated, and by free people who wanted to live in a country where they had the rights of citizens.

During the time of the John Brown raid, October 16 – 18, 1859, Mary Ellen Pleasant was an agent for freedom in the Roanoke River area of Virginia and North Carolina. Disguised as a jockey, she would lead groups to the Allegheny Mountains, where Brown intended to establish forts and stations to move people through Pennsylvania and Ohio to the western territories for self-governing communities he called “Good Towns.” Some would continue through Detroit into Canada to join the thriving cooperative settlements begun by missionary societies. When the Harpers Ferry entrance failed, Pleasant remained incognito in familiar St. Louis for a while, then returned to San Francisco and her burgeoning enterprises that made her one of the wealthiest women in California during the 1860s and 1870s. Her fortunes turned in the 1880s, and Mary Ellen spent the rest of her life in poverty. Her dying wish (at age 89) was to have her gravestone contain a single inscription beside her name: “She was a friend of John Brown.”

But what of her grave at the Tulocay Cemetery in Napa, California, where she died in 1904? In the early 1970s, the San Francisco Negro Historical and Cultural Society placed a memorial plaque reading “Mary Ellen Pleasant, Mother of Civil Rights in California 1812-1904. She was a Friend of John Brown.” This was done by arrangement with the cemetery, which is privately operated. In 1978, the E Clampus Vitus fraternity clamped a plaque over the headstone which declared this was the grave of “Mammy Pleasant, a remarkable woman of the Gold Rush.” The damage to the grave was extensive.
Who are the Clampers of E Clampus Vitus? In my honest opinion, they are vandals who arrogantly portray themselves as historical humorists:


Modern-day Clampers typically dress up in garb reminiscent of the gold-rush -- usually a red miner's shirt, and black hat -- and they still hold their unique initiation ceremonies, but now specialize in putting up commemorative plaques of historical and hysterical interest. Along with serious sites that need more reverent commemoration, Clampers have been known to plaque places like saloons, bawdy houses, and other locations that have been "overlooked" by more serious historical societies. (E Clampus Vitus website) 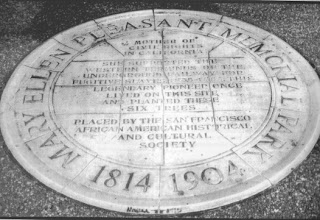 “Plaqueing” Mary Ellen Pleasant’s grave with a racially derogatory term (used twice) is hardly reverent commemoration, especially when it was done without permission and the grave damaged. Although there are many plaques from E Clampus Vitus in graveyards in California that have apparently obtained permission, and are not clamped directly on the burials, the intended purpose is to be “the comic strip on the page of California history.” Their arrogant slogan “Right wrongs nobody” can hardly be applied in the case of Mary Ellen Pleasant, a friend of John Brown and the Mother of Civil Rights in California.

On January 15, 2011, from 5-7 p.m. the Napa Valley Museum will hold a Benefit Reception to raise matching funds from the Tulocay Cemetery to replace the damaged Mary Pleasant grave site monument. A wine-tasting by the Black Coyote Wintery, h’orsdeuvres, and brief talk and film screening with Susheel Bibbs are planned. The talk is titled: "Before Martin There Was Mary," Screening: The Legacy of Mary Ellen Pleasant, (Bibbs' Telly Award winning TV short). The museum is at 55 Presidents Circle in Yountville, California. Contact: Pat Alexander, pat@napavalleymuseum.org, telephone 707-944-0500 ext. 106. A $35 donation is asked.
If attendance is not feasible but you would like to support the restoration, please mail your donation to the Napa Valley Museum, P. O. Box 3567, Yountville, CA 94599.

More programs in store by Susheel Bibbs, Ph.D., who has been researching, performing, and writing about Mary Ellen for many years: www.mepleasant.com/

The second event is Oakland's first public screening of Meet Mary Pleasant, Mother of Civil Rights. Did you know Pleasant briefly lived in Oakland and was (of course) the richest African-American resident? We want everyone who missed it on TV in the Bay Area to see this inspiring film there, and it's a perfect time to be inspired by the legacy of Pleasant and MLK. Please pass the word -- ask others to do the same.

Thank you for this thorough article. I just visited Tulocay Cemetery yesterday, and the site is looking good!