Lake Placid, N.Y. - Thomas Hopkins, a descendant of Harper's Ferry raider John A. Copeland, led a wreath-laying ceremony Saturday at radical abolitionist John Brown's grave at his North Elba farm.
This year's wreath-laying, which happens every year around this time to commemorate Brown's execution and burial in 1859, came at the end of a two-day anti-slavery convention in Lake Placid, meant to highlight both the history of slavery in New York and its continued existence.
"The situation today is different than it was when my uncle went to Harper's Ferry," Hopkins said in a brief speech at the ceremony. "Today slavery is not as overt or sanctioned by law as it was the past. It is usually placed within a 'poverty' or 'under-class' context. However, the fundamental process and results are very similar - denial of fundamental human rights, exploitation and denial of the American Dream."
Copeland was a free black man and Oberlin College student who took part in the raid with his uncle, Lewis Leary. 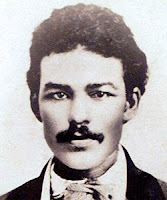 Brown led the raid on a federal arsenal in Harper's Ferry, (now-W.) Va. in 1859, part of his plan to get weapons to arm a slave insurrection. He was hanged on Dec. 2. Brown was buried at his farm in North Elba with his two sons and what are believed to be nine other Harper's Ferry raiders, including Leary.
Source: “Descendant of John Brown raider speaks at wreath-laying.”  Adirondack Daily Enterprise (December 7, 2010)
See Oberlin College’s website for article about John A. Copeland
Posted by Louis A. DeCaro, Jr. . . at 4:35 PM