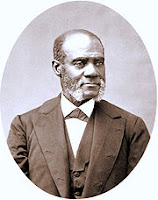 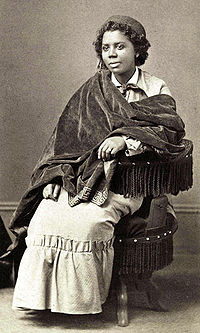 Edmonia Lewis and her “John Brown”
The correct date of birth for Mary Edmonia Lewis is not known to her biographers and students, but was sometime between 1840 and 1845.  She was born to an African American father and a Chippewa First Nation mother.  Biographers have likewise been uncertain of her birthplace, varying accounts saying she was born in Ohio, New York, or New Jersey.  They may find this article of interest, particularly since Garnet himself says that Lewis was born in Greenbush, New York, near the city of Albany.  Considering that Garnet says that he knew Lewis from when she was a little girl (with artistic ambition!), it is probably the case that his statement on her origins is reliable—including the mention of her black and Chippewa parentage.
Lewis studied at New York Central College, a Baptist abolitionist secondary school in McGrawville, New York, and in the year of the Harper’s Ferry raid, she was enrolled at Oberlin College in Ohio.  Her experience at Oberlin was tainted by false accusations of attempting to poison some white female students; the hostility against her was so great that Edmonia was attacked and beaten quite brutally.  She was acquitted in court and continued her studies at Oberlin, but did not complete her degree, evidently because her enemies there falsely charged her with theft.  Her pre-mature departure from Oberlin was a result of these disturbing developments and perhaps also because she much preferred to pursue sculpture. Whatever the case, Edmonia never completed her degree program at Oberlin.
From Ohio, Edmonia moved to Boston where she apprenticed under the renowned sculptor, Edward A. Brackett, who had done a sculpture of John Brown in 1859 through the influence of George L. Stearns and other abolitionists.  It was probably during this period in Boston when she molded an infant’s foot to the delight of William Lloyd Garrison, the incident likewise being relayed to us by Garnet.  Although she was befriended by sympathetic means in Boston, Lewis did not want to remain long in apprenticeship and opened a studio.  At this period she executed a medallion of John Brown, the first of a number of sculpturing projects regarding the martyred abolitionist.
Edmonia first went to Florence, Italy, during the U.S. Civil War and became established in the international artistic community there, and was accepted into
the “strange sisterhood" of women sculptors living in Rome.   In the 1860s, when she learned that Henry W. Longfellow was in Rome, she observed him as he walked along the street, sketched his likeness, and then sculpted a bust that was well received by his family.  Lewis is well known for her sculptures depicting the biblical figure of Hagar and the death of the Egyptian Queen Cleopatra, but she executed many works of sculpture relating to historical, literary, and classical themes, including abolitionists like Ralph Waldo Emerson and Wendell Phillips, and Civil War era figures like Abraham Lincoln and Horace Greeley.  Lewis returned to the John Brown theme with a life-size sculpture that she donated to the Union League Club of New York City. 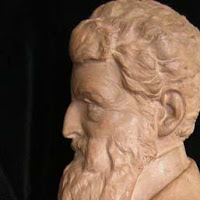 Lewis’ bust of John Brown seems to have been unveiled first at the Philadelphia Exposition of 1876 where it was well received.  She probably exhibited it again among other works at the Chicago Interstate Exposition of September 1878, prior to her presentation at the Shiloh Presbyterian Church in December.  A decade later, Lewis received a visit in Italy from Frederick Douglass, and she toured the aging abolitionist hero and his second wife around Rome and Naples.  The biographers of Mary Edmonia Lewis do not know the precise date of her death in Italy or the place of her burial.   I am inquiring as to her life-size statue of Brown that was donated to the Union League Club in Manhattan. Based upon Garnet’s words in the Shiloh presentation, Lewis had done ten copies of the John Brown bust up until that time, although there is probably no way of knowing what the life time sales were for this particular piece. Fortunately, as shown here, the Smithsonian Institute in Washington, D.C holds a copy of the Edmonia Lewis John Brown bust. [There are many sources regarding this amazing sculptor, but I found the following most helpful: “Edmonia Lewis Biography,” in Women in History (Lakewood, Ohio: Lakewood Public Library, 2010) —provides a bibliography and links to other good sources; and Stephen May, “The Object at Hand,” The Smithsonian Magazine (Sept. 1996).]
http://boards.ancestry.com/surnames.douglass/8/mb.ashx
Posted by Louis A. DeCaro, Jr. . . at 6:17 PM

Splendid work. Here's a link to a recent Lewis discovery.

Thank you for posting this research! Rev. Joseph S. Attwell was my great-great grandfather. I was doing some genealogy research online and happend upon this post.

You are correct the Rev. J. S. Atwell is my great-grandfather and was the rector of St. Philip's Episcopal at that time. His name should be spelled with two "t"s though.

J.S. Attwell and his wife Cordelia and her parents (William and Mary MacFarland Jennings) were prominent early New York/Philadelphia activists in the cause of abolition and worthy of academic research in their own right. Joseph and Cordelia were my great-great grandparents.

Thank you for your input. If you happen to have an image of your great forebear, I'd be delighted to include it in this post. Hopefully you're working on this research for publication. Best wishes and thanks--LD

We would be delighted to provide an image. Please advise how.

Thank you. If you can send a scan as an attachment, that would be fine. louis.decaro@nyack.edu

I will insert it in the blog article. Thanks--LD