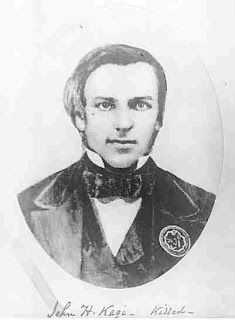 John Brown was suffering from ague in the fall of 1858, and his trusted lieutenant, John Kagi, nursed him back to health in the Adair Cabin in Osawatomie.  Ague was a form of malaria that affected Osawatomie’s pioneers because the community was built near the Marais des Cygnes River, which means “marsh of the swans” in French, a marshy river in the 1850s. Mosquitoes bred in the marsh and infected the pioneers with the disease, which was a common illness in early Osawatomie.
Concerning Brown’s convalescence in the Adair Cabin, Kagi wrote to his sister and father: “I have just received your letter of 1st of Sept. — having just arrived in Lawrence. I left the vicinity of [Fort] Scott & [Chanton’s] Trading Post some five or six weeks since, but Old B. was again quite sick while on the road, so that we were compelled to lay up at Osawatomie for a month, during which time, by my taking care of him, I was taken down, but only for a week. I have now acquired a tolerable degree of health. It is quite sickly in all the southern part of the [Territory]. B. has now quite recovered.”
Despite Brown’s and Kagi’s illnesses, and the rigors and dangers of the conflict in Bleeding Kansas, Kagi’s resolve was not weakened, but rather strengthened.
“I am exceedingly sorry to [learn] of your destitute condition and of your failure of health,” Kagi wrote. “But I believe there are better times dawning, to my sight, at least. I cannot now laboring and waiting without present reward, for myself alone, it is a future reward for mankind and my dear father and sister. There can be no doubt of the reward in the end, or of the drawing very near of the success of a great cause which is to earn it. Few of my age have toiled harder or suffered more in this cause than I, yet I regret nothing that I have done; nor am I in any [discouraged] at the future. It is bright and good, and treads on to meet the hopeful with rapid strides.”

John Brown and his men believed that slavery was a malevolent stain on America’s moral and spiritual fabric, and they were willing to endure illness, fight and risk death to end it.

John Brown was preparing for his Harper’s Ferry raid in 1858, and was gathering arms and support for his Virginia campaign. Kagi worked to gather arms and troops in Kansas Territory in 1858 and wrote: “Things are now quiet, generally. I am collecting arms & c. belonging to J.B. [so] that we may command them at any time. All difficulties in the way of our speculation have now disappeared or have been surmounted, and we only await the favorable season. Do not fear. [Did] you know detail, which I cannot give, you would look upon matters with a different eye. Not one of the most fearful and [cautious] who do know these have the least doubt of a speedy and certain success.”
John Brown and his men believed that slavery was a malevolent stain on America’s moral and spiritual fabric, and they were willing to endure illness, fight and risk death to end it. Osawatomie was the headquarters of Brown’s abolitionist crusade in Kansas Territory.
Grady Atwater is the administrator of the John Brown State Historic Site in Osawatomie, Kansas
Source: Grady Atwater, “Kagie a loyal lieutenant at John Brown’s Side.”  Osawatomie Graphic online [Osawatomie, Kan.] (May 19, 2010)
Posted by Louis A. DeCaro, Jr. . . at 2:04 PM