Pottawatomie, 1856: The Political and Personal 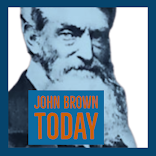 Thanks to the misinformation and harping of writers who actually know very little about Brown, he is all-too-often remembered first and foremost as the man who led the Pottawatomie killings—massacre, as they call it--in the Kansas territory, which took place overnight on May 24-25, 1856. The story of the killings of five pro-slavery Southern settlers has been recounted ad nauseam and often in an unbalanced and even distorted fashion—always to John Brown’s disadvantage. In these narratives, the men who were killed by Brown and his party are typically presented as having been guilty of nothing more than holding proslavery sympathies. In some narratives, they are “innocent victims.” In other narratives, they are portrayed as having been almost randomly chosen as targets of Brown’s alleged vendetta strike against proslavery people.  We have heard it and seen it time and again: they say John Brown is the original “American terrorist”—as if terrorism in this nation originated in 1856, rather than in the violent and intentional acts of racist aggression unleashed by whites upon indigenous and African people in North America.  As the legal historian Paul Finkelman has observed, no, John Brown was not a terrorist.  John Brown did not fight against human freedom. He fought people who were trying to deny democratic and human rights.  I prefer to put it this way. John Brown was not a terrorist.  He was a counter-terrorist.

In the frequently distorted Pottawatomie scenario, the five men killed—William Sherman, Allen Wilkinson, James Doyle and his sons William and Drury—are victims virtually above reproach, while John Brown and his men are adjudged as murderers and terrorists.  Often, too, narrators speak of the Pottawatomie killings as if Brown did them all alone, and that his men were held under some sort of spell. In fact, every one of the Pottawatomie killers joined in this mission because they understood what was at stake. In fact, this flattened, sterile reading of the Pottawatomie killings cannot be presented without (1) misrepresenting the real facts of the incident; (2) ignoring the historical-political context; and (3) overlooking the moral and political "big picture" as it existed in 1856.
The Real Facts
First, the real facts of the Pottawatomie episode are that Sherman, Wilkinson, and the Doyles were not mere “victims,” nor were they killed because they were proslavery men, or because they were Southerners. While John Brown did not agree with proslavery settlers in Kansas, he interacted with them peacefully from late 1855 when he arrived in Kansas, until the heated circumstances of the spring 1856, when proslavery terrorism began to mount its bold assault upon free state people. Brown had regularly traded with pro-slavery Missourians and co-existed with proslavery settlers because, first, he was first a peaceful man, not someone with a “unslakable thirst for violence”, like one biased, Lincoln-worshipping academic has put it. Second, Brown wanted the democratic process to play out—the voting of settlers that was supposed to determine whether Kansas entered the Union as a free or slavery state.  Third, Brown and his sons would have abandoned Kansas had it been won by a majority proslavery vote, although in fact the superior number of settlers were free state. The question for Brown seems never to have been if the free state side was going to triumph in the democratic process, but whether the South would acquiesce to a free state victory at the polls, of if they were going to attempt to thwart it by illegal means. 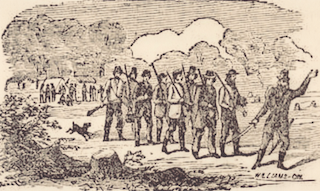 Unfortunately, most popular narratives of Brown’s role in Kansas virtually begin with May 1856 and the Pottawatomie killings. But Brown had been in Kansas since the fall of the previous year and his correspondence is filled with optimistic expressions that Kansas would enter the union through the democratic process without interference by proslavery thugs.  It was only when things took a turn for the worst that Brown took up arms. The idea that he was looking for an excuse to kill proslavery people is patently incorrect, not only in terms of the record, but in terms of his own biographical profile overall.
Of course, it is true that Brown went to Kansas with weapons in late 1855; but he did so only because he was asked to do so by his sons, who had settled in the territory the year before, and were worried about the possibility of a worsened political scenario. From his arrival, Brown monitored political matters in the Territory and over six months of residence in Kansas, he never lifted a finger to oppose, threaten, or harm a pro-slavery person.
So if the “Pottawatomie Five” were not killed because they were proslavery men, why were they killed? Well, simply put, the men who were targeted by John Brown and his party were part of a circle of Kansas territorial settlers who were actively engaged in conspiring to assist and support the overthrow of the democratic process in the territory by any means necessary.  Sherman, Wilkinson, and the Doyles were local allies of invading proslavery so-called "Ruffians" (that is, domestic terrorists) who began to invade the territory in the spring of 1856 with the clear intention of using violence and intimidation to seize power from the majority free state settlers. These terrorists were particularly hostile toward pro-black abolitionists like the Browns.  In their eyes, it was bad enough that Northerners did not want slavery in Kansas; it was far worse when some of those settlers were outright abolitionists who did not hesitate to declare their belief in black equality.  To no surprise, it did not take long for the Browns to become distinguished in the eyes of their proslavery neighbors like the Sherman brothers and Allen Wilkinson, who was a proslavery political leader in Kansas.
While some of the “Pottawatomie Five” were low-life types, this was not the reason they were killed. Nor was the fact that the Doyles had formerly been slave hunters in the South the reason for their being targeted. Rather, the basis of all of these men having been taken from their homes at night and killed was that they were discovered through reliable sources to have been conspirators and collaborators with invading terrorists, or “hordes,” as Brown referred to them. Specifically, John Brown had been given good information that these men were connected with locally encamped invaders, and that these terrorists would be directed against the Browns by the likes of the Doyles, especially because of their pronounced antislavery and pro-black position. According to Brown family testimony, John Brown went so far as to conduct an investigation himself to make certain of the conduct and intention of his proslavery neighbors. When he was certain of their intentions to lead an attack upon his family, there was no doubt left in his mind that waiting passively would only give them the time and opportunity they needed to bring destruction upon his family.
It is important to stress that the typical free state person was not an abolitionist who believed in black equality.  Most of the free state settlers in Kansas really were pro-free white labor, not pro-black. Many of them did not want a black presence in Kansas, which was a point of contention for the Browns. To put it another way, many free state settlers from the North were conservatives. Like the moderate Abraham Lincoln, they wanted the nation to be a white-first nation; blacks should be free, but priority and prerogative should be given to white people.

“No, the war [in Kansas] is not over. It is a treacherous lull before the storm. We are on the eve of one of the greatest wars in history, and I fear slavery will triumph, and there will be an end of all aspirations for human freedom. For my part, I drew my sword in Kansas when they attacked us, and I will never sheathe it until this war is over. Our best people do not understand the danger. They are besotted. They have compromised so long that they think principles of right and wrong have no more any power on this earth.*

Hello Louis, where did you find info that the Doyles had formerly been slave hunters in the South and what is the story behind John Jr. giving up a slave he had rescued?

The basis for that background on the Doyles is from the Villard Papers at Columbia University, an interview conducted on June 4, 1892 by William E. Connelley, with Montgomery Shore, a free state man and associate of Brown. Shore told Connelley the Doyles were from the South, had worked as plantation guards and patrollers, and had their bloodhounds with them. One of their functions was to catch runaways in the territory. The reference to John Jr. is from Villard's biography, pp. 150-51. It was actually two enslaved people. John Jr. was serving as the leader of the Pottawatomie Rifles and was deposed as a result, and the two victims were returned to slavery under the new leader, H. H. Williams.