In this worried and busy season, there has been a lot to distract from the Old Man.  Perhaps, then, some image-relics will suffice for this time. 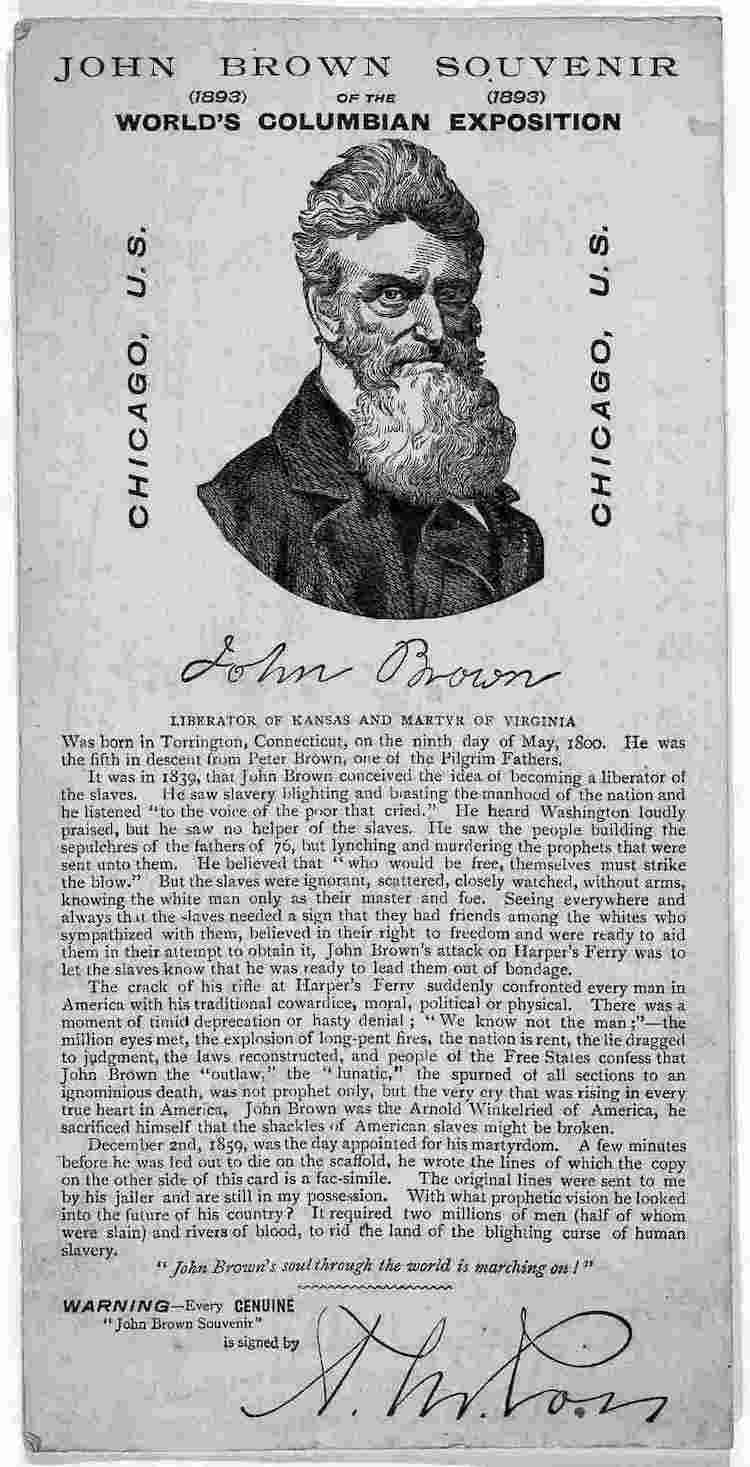 The image above is an item published for the World's Columbian Exposition, also known as The World's Fair, held in Chicago, Ill., from May 1 through Oct. 30, 1893.  Unfortunately, this printed document was two-sided, and the image not available on the verso side was of Brown's last written words, known often in history as his "prophesy," in which he stated that slavery would not end "without much bloodshed."

Browniana was on display in Chicago for this event, but what makes this "John Brown Souvenir" card interesting is that it was the production of the Canadian physician and naturalist, Alexander Milton Ross, whose signature is reproduced at the bottom.  Ross wrote a memoir of his association with John Brown, Recollections and Experiences of an Abolitionist, and Memoirs of a Reformer, which was a total fraud.  In fact, Ross was a pretender who probably never came within a mile of Brown.  But by the 1880s, John Brown's children were growing older and Ross was able to charm his way into their confidence, especially John Brown Jr., with whom he shared a common belief in spiritualism.  It appears that the rest of the Browns were probably taken in by Ross, who convinced them likewise that he had been a confidant of their father.  Once his hoof was in the door, however, Ross used the trust of the Browns to obtain copies of Brown's actual letters and primary information about Brown, which then enabled him to enhance his phony memoir in a second edition, and cement himself into the narrative as a friend of John Brown.

The extent of Ross's deception is almost stunning.  He is not only mentioned in Richard Hinton's famous biography, John Brown and His Men (1894), but even fooled a good many writers since then.  Ross also developed a warm correspondence with Anne Brown Adams, the daughter of John and Mary Brown, and got her to write extensive descriptions of the Harper's Ferry raiders, ostensibly at the request of his son, Garibaldi Ross.

This Canadian con man not only hoodwinked the Browns, but used his stolen bona fides to worm his way into events like the 1893 World's Fair.  This was how he acquired the original "prophecy" in Brown's hand, written for Hiram O'Bannon on the morning of December 2, 1859, the day of his execution (below).  Evidently, Ross reproduced the document on the verso side of this "souvenir" card and sold it at the World's Fair for a tidy profit. After he had used the original autograph for his own benefit, Ross then made further profit by selling it to Frank Logan, a collector whose papers finally ended up in the Chicago Historical Museum, where it can be found today. It is likely that Brown's signature was reproduced from an original obtained by the deceiver, although the text probably was composed by Ross himself.  Sadly,  apart from being a liar and phony, he seems to have been a genuine admirer and apologist for the Old Man.


Ross perhaps succeeded in his deceptions beyond his wildest hopes because it took decades before his con was posthumously discovered (he died in 1897).  He was finally sniffed out by none other than the godfather of John Brown research, Boyd B. Stutler, who found that the Canadian doctor and ornithologist had been trying to appropriate autographs of Brown for quite some time before he managed to fool the Browns. In a letter that Stutler owned, Ross had written to Brown's former associate and "Secret Six" associate, George L. Stearns in 1865, asking for Brown's writings.  In that letter, Ross lied, claiming that he had attended Brown's Chatham convention in May 1858--something that is quite impossible, since the only whites present in that meeting were Brown's men and certainly his name appears on none of the surviving records of the Canadian meetings.  In fact, Ross appears nowhere in any of the records of John Brown's activities, not even by reference from him or any of his associates at the time or afterward--until he had successfully lied himself into the shrinking circle of Brown's surviving associates in the later 19th century.  (I have confirmed the extent of Ross's duplicity beyond even what Stutler has known in my own examination of his correspondence with John Brown Jr.)  However, Stutler summed up the liar's legacy best in a 1951 letter to his friend and fellow Brown scholar, the Rev. Clarence S. Gee: "Yea, verily, Alexander Ross was a liar and the truth was not in him.  Yet he chiseled his way into a measure of reflected fame."
Posted by Louis A. DeCaro, Jr. . . at 3:19 AM