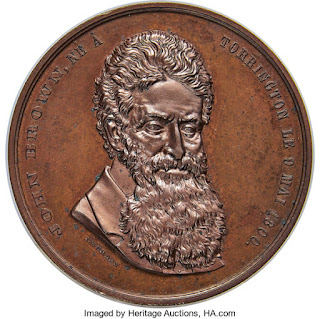 1000 MS Uncertified. 1859 John Brown French Mourning Medal, Bronze. MS63 Brown NGC. 67.5 grams, 57.6 mm. This is just the third example of this important medal that we have handled. A portrait of the abolitionist with his exceptional beard faces one-quarter turn to the right on the obverse of this French medal. The obverse legend states that John Brown was born in Torrington (Connecticut) on May 9, 1800, and the medal is signed J. WURDEN below the bust. The reverse is in memory of John Brown, legally assassinated in Charlestown on December 2, 1859, and serves as a tribute to his sons and companions, dead victims of their devotion to the cause of black freedom. Jean Wurden was French artist who was born in 1807 and died in 1874. This splendid chestnut-brown medal exhibits bold definition with glossy surfaces and inconsequential, scattered spots on each side. A rare issue that seldom appears for sale.John Brown was born in Torrington, Connecticut on May 9, 1800, and spent his childhood in Hudson, Ohio, birthplace of the famous numismatist, James W. Ellsworth. Brown and his five sons assisted several escaping slaves, and moved to Kansas in 1855 where he continued to fight slavery. Brown led a raid on the federal armory at Harpers Ferry, (West) Virginia in October 1859 with the intention of starting a slave liberation movement through the south. He was hung for treason against the Commonwealth of Virginia on December 2, 1859.From The Alan V. Weinberg Collection, Part II. 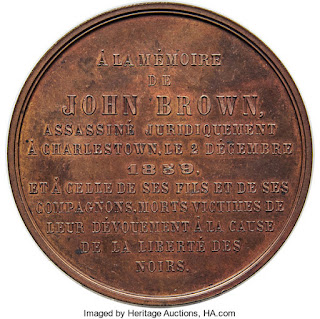