The beautifully renovated home of Salmon Brown is currently on sale in Portland, Oregon.  Salmon was the seventh of John Brown's sons (who survived infancy), and lived out his days in the northwest, dying in this house in 1919.

The house, originally constructed in 1905, is listed by Zillow as a three bedroom and two bathrooms, has 2,250 square feet and is located at 8052 NE Couch Street, in Portland.  When Salmon lived there a century ago, the home was listed as 2024 East Couch Street. 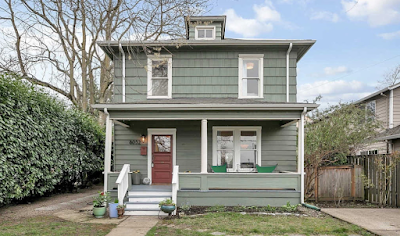 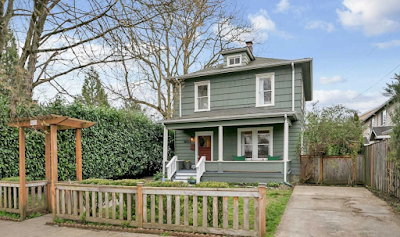 Salmon Brown was born to John and his second wife Mary Day Brown in 1836, in Hudson, Ohio.  He took part in the drama in territorial Kansas in 1856, but did not follow his father to Harper's Ferry three years later.  In Kansas, he was one of the bold men gathered by John Brown to kill five proslavery conspirators, executing them in the vicinity of Pottawatomie Creek in May 1856.  The following month, Salmon fought in the the Battle of Palmyra (better known as The Battle of Black Jack) on June 2, 1856.  Afterward he accidentally wounded himself by gunshot, but survived to return east with his father and brothers and their families.  After returning to the Brown homestead in North Elba, New York, Salmon, now twenty-one-years-old, married Abbie Hinckley (b. 1839) on October 15, 1857, about two years before the Harper's Ferry raid. In 1864, Salmon accompanied his mother and sisters westward and ultimately settled in Oregon.


In 1919, at the age of eighty-two, Salmon apparently grew despondent after being laid up in bed with illness, and on May 10--the day after his famous father's 119th birthday--Salmon shot himself once again, this time deliberately, and this time taking his own life.  According to local press reports, such as theOregon Daily Journal, he used a .44 caliber pistol that had belonged to his father.1  Of his suicide, a confidant of Salmon concluded:

When I put myself in his place and think of how he, month after month, for years, from the same bed looked at the same four walls and realized as the days dragged slowly by that he might be for many more years a burden to his loved ones, I cannot feel it in my heart to judge him harshly.2

A sad footnote to his death is found in an article that appeared later the same year in Portland's Daily Journal, noting that Salmon's son--named for his grandfather John Brown--had been "bound over to the federal grand jury" for narcotics abuse.  This John Brown was a practicing dentist in Portland, and reportedly was quite unhappily married to a troublesome wife who allegedly had driven him to "seek surcease" from these difficulties in narcotics. Beside his abuse of prescription forms to obtain drugs, Brown enjoyed an "otherwise splendid reputation," and  promised that he would stop the use of narcotics, leading the court to release him on his own recognizance.3  Hopefully he was able to follow through on his promise.
=====
Sources