The Swann Auction Galleries of New York conducted an auction of printed and manuscript African American documents on March 30.  The auction featured a wide range of materials covering three centuries, from 18th century abolitionist documents to images of boxer Muhammad Ali.  Most notable was the sale of an amazing 19th century photo album that was gifted to Emily Howland (1827-1929), the daughter of Quaker abolitionists from Sherwood, New York.  Howland had embraced  antislavery as a student, and after studying in Philadelphia she became a teacher in a school for black females in Washington, D.C.   After the start of the Civil War, Howland began working with recently liberated blacks in a "contraband camp," distributing food and clothing.  The term signified the legal status of enslaved people who came into the hands of Union forces, in recognition of their legal status as property of the slaveholders according to the Constitution.  (Lincoln's Emancipation Proclamation targeted this particular status, declaring all enslaved people in rebel states as free--thus beyond the legal claims of slaveholders.)   Howland worked at Camp Todd, which was situated at Robert E. Lee's estate in Arlington, Va. 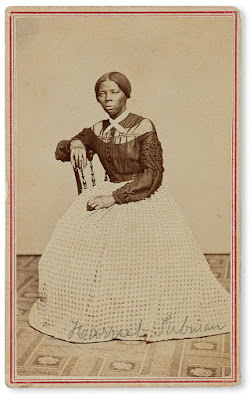 Howland received the album as a gift from her friend and mentor, Carrie Nichols, on January 1, 1864, while still working at Camp Todd.  She evidently added images to it in later years, although it is not clear which images were part of the original album gift.  As the Swann site observes, this album is "truly impressive," since it contains an array of images, including two carte-de-visite images of Harriet Tubman.  While one of the Tubman images is familiar, the other is new to us--taken of Harriet by Benjamin F. Powelson sometime between 1868-69, when the photographer resided on Genesee Street in Auburn, N.Y.   This would show Tubman as being somewhere between 48-  and 49-years-old.  Other images in the album are of John Willis Menard, the first black man elected to the U.S. Congress (and the first black politician to address Congress); antislavery figures like Charles Sumner, Lydia Maria Child, Samuel Ely, William Ellery Channing, Colonel C.W. Folsom, and also images of Charles Dickens and Maximilian of Mexico. There are also a couple of images of young black women that were either students or associates.

The album was successfully auctioned and the price realized at $161, 000.

On March 24-25, a symposium at Rutgers University symposium examined the legacies of three communities, considering their connections to the freedom struggles of African Americans. Global Timbuktu: Meanings and Narratives of Resistance in Africa and the Americas involved an gathering of international scholars, including archaeologists, historians, and curators from Timbuktu, Mali.
The symposium was organized by Rutgers University's Center for African Studies in the School of Arts and Sciences.  The archetype for this conference was Timbuktu, the city in the West African nation of Mali, a cultural, commercial, and intellectual center in the 14-16th centuries, particularly remembered  for its ancient library on art, medicine, philosophy, and science.  The symposium included a tour of an excavation site in Westampton Township, New Jersey, where an African American settlement existed with the name of Timbuctoo. 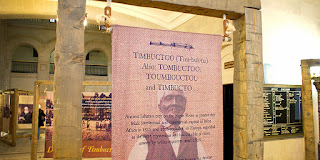 More familiar to John Brown students is the Timbuctoo settlement in Essex County, N.Y.  This Adirondack settlement was established in the 1840s as a response to a state law requiring blacks to own $250 in property to vote, and was heartily and advanced and supported by John Brown, who was then emerging as a familiar face to many black abolitionists.  Brown was operating a wool commission business in Springfield, Mass., and formed a friendship with Willis Hodges, who headed the black settlements in the Adirondacks (there was another settlement in Franklin County).

John Brown helped to promote the project, which was the brainchild of abolitionist tycoon Gerrit Smith, who donated huge tracts of land to black residents of New York State.  Contrary to popular opinion, Timbuctoo in Essex County, N.Y., was no haven for fugitive slaves, but predominately an effort to promote an agrarian economic program, which Hodges believed offered a better future to the free black community.  Brown naturally supported this effort, not only as a friend of black self-determinism but also as an expert in most agrarian matters.  To no surprise, he went so far as to relocate to North Elba, nearby Timbuctoo, where he could mentor and coach the urban settlers.  Unfortunately, Timbuctoo was no great success, and from the onset black settlers either found themselves being taken advantage of by local white hustlers, or discovered that settling on the cold Adirondack tracts was simply too difficult and frankly undesirable.  Ultimately, only a small number of black families persevered, although Brown was happy to build himself a home there, which is also the site of his grave.

The Adirondack Timbuctoo was featured at the symposium,  especially featuring the “Dreaming of Timbuctoo” Exhibition, which was introduced by John Brown Lives! founder and director, Martha Swan.  In conjunction with the symposium, Swan hosted Madame Hawoye Fassoukoye of Timbuktu, Mali,  a visiting teacher.  Here, Timbuktu met Timbuctoo, as the African teacher did a whirlwind day tour across the Tri-Lakes area, and Fassoukoye spoke to students in both a local college and high school.  As the Lake Placid News reported (30 Mar.), Fassoukoye also toured the John Brown farm.  "Through what I have seen right now, I've learned a lot of things, like the history of the Browns," Fassoukoye said afterward "Now I know where this name Timbuctoo comes from, where the settlers were. This is kind of an eyewitness (experience). I've seen it with my own eyes and will report it (back home)."