I have taken the liberty of utilizing an original chronology prepared by James T. Hickey, the Curator of the Lincoln Collection, of the Illinois State Historical Library.  It was published in 1990 by the Illinois Historic Preservation Agency in Springfield, Ill.  You may read the Hickey chronology on the Internet Archive on this link.  I have simply combined it with my own chronological notes on John Brown's first thirty-five years.  I have made no modifications or changes to Hickey's Lincoln material. --LD 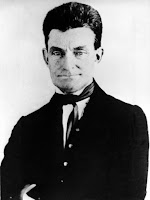 Dec. 9. John’s mother, Ruth Mills Brown, dies
in childbirth.  “At Eight years old John was
left a Motherless boy.”  There are five
children in the family, including an adopted
son named Levi Blakeslee.

Feb. 12.   "I was born Feb. 12, 1809 in then Hardin
County Kentucky." The birthplace farm is
about three miles south of Hodgenville, Kentucky.

No census data available for the Browns in Ohio.

The census for Hardin County lists the family of
Thomas Lincoln as a male between 25 and 45
years of age with wife between 26 and 45,
boy (Abraham) under ten, and girl (Sarah) under ten. 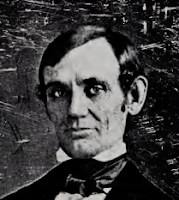 Spring.   Thomas Lincoln and family move from the
birthplace farm to a 230-acre farm on Knob Creek,
ten miles north and six miles east of Hodgenville.

_____. A younger brother of Abraham, named
Thomas, is born this year and dies in infancy.

_____. One academic year of instruction at
the Tallmadge Academy, Tallmadge, Ohio, under
the Rev. Simeon Woodruff.

Autumn.   For a few weeks in the fall of 1815 Abraham
and his sister Sarah attend a school taught
by Zachariah Riney. The following year the
school is taught by Caleb Hazel.

Mar. 6.   John examined and admitted to
membership in the First Congregational Church
of Hudson, Ohio.

Summer.  John, his brother Salmon, and Orson
Oviatt travel to Canton, Conn., to study under
the Rev. Jeremiah Hallock.  They later transfer to
an academy at Plainfield, Conn., led by the
Rev. Moses Hallock. John and Salmon remain
until 1817.  John quits school due to chronic
eye inflammation and economic hardship.
“Fire from the Midst of You”: A Religious Life of John
Brown, pp. 61-64

December.   During the first of this month
Thomas Lincoln moves his family from
Kentucky to what is now Spencer
County, Ind. (then Perry County).

Oct. 15.   Thomas Lincoln goes to the
government land office at Vincennes
and enters the farm he has settled on.

Mar. 1.   Thomas Lincoln's family and the families
of his two stepsons-in-law start for Illinois.
Abraham, one of the thirteen in the party,
drives one of the three wagons.

Jun. 12.  In a letter to his father, John Brown reveals
that he has had conflicts with certain Masons in
Meadville, Pa., due to his apostasy from the Lodge and
his anti-Masonic stance.  “I have discovered that my
movements are narrowly watched by some of the
worthy brotherhood.”

April-July.   Lincoln pilots the flatboat to New
Orleans for Offutt and return to New Salem,
eighteen miles northwest of Springfield.

Mar. 9.   Lincoln becomes a candidate for the
legislature on a platform favoring improvement of
navigation on the Sangamon River, changes in
the usury laws, and universal education.

Apr. 7.   Lincoln is elected a captain in
the 31st Regiment, Illinois Militia.

May 27.   Captain Lincoln's company is
mustered out of service at Fort Johnson,
Ottawa. He then enlists in Capt. Elijah Iles'
regiment for twenty days.

July 10.   The mustering-out roll of Capt. Early's
company, written by Lincoln, is certified by
Lt. Robert Anderson (who was to be
command at Fort Sumter in 1861).

Aug. 6.   Lincoln, a candidate for the first time,
is defeated in his bid for a seat in
Illinois legislature. He is eighth
in the field of thirteen candidates.

Aug. 10.  Dianthe Brown dies after bearing a son
on Aug 7.  The baby preceded her in death on
Aug. 9.  John is left with five children.

May 7.   President Jackson appoints Lincoln
postmaster at New Salem. He serves
until May 30, 1836, when the office
is discontinued.

Oct. 26.  Brown informs his brother Frederick of the
death of their brother, Salmon Brown, a journalist
residing in New Orleans.

Mar. 1.  In a letter to his relative and business partner,
Seth Thompson, Brown laments the scarcity of cash and
bemoans the closing of National Bank by Pres. Andrew
Jackson as “General Jackson darkness.”

Aug. 4.   Lincoln, in his second try for public office,
is elected to the Illinois House of Representatives
as a representative for Sangamon County.

Sept. 30.   Lincoln surveys the town of New Boston
on the Mississippi River, now in Mercer County.

Dec. 1.   Lincoln takes his seat in the fifty-five-member
Illinois House of Representatives at Vandalia.

Nov. 21.  John Brown writes to his brother
Frederick (1807-77) about possibly establishing
a school for black youths and even purchasing a
young black youth from slavery, “a favorite
theme of reflection for year.”

May.  John Brown leaves Pennsylvania, relocating
his family to Franklin Mills [today, Kent], Ohio,
in order to pursue a tannery partnership with
Zenas Kent, as well as other entrepreneurial pursuits.

______.  At some point in the year, perhaps
December, Brown purchases a 100-acre-plus farm
from Frederick Haymaker, in the area of Franklin
Mills, Ohio, with monies from other investors.  Sharing
the common anticipation that Franklin Mills is going to
expand rapidly, his intention is to profit from the
boom in Real Estate by parceling out and selling
the farmland at a profit.

Dec. 7.   Lincoln is present for the opening of


a special session of Illinois legislature at Vandalia.
Posted by Louis A. DeCaro, Jr. . . at 10:22 PM